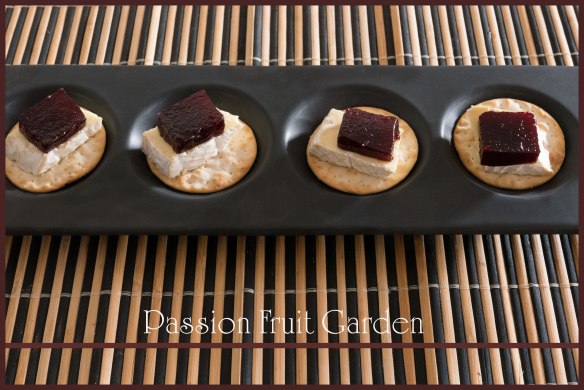 The latest example of this personality flaw happened a couple of weeks ago.  It was our friend Di’s birthday and, as we are social distancing, she couldn’t celebrate it in the usual way so she asked if she, and her husband Fred, could come around for driveway drinks.

The plum paste was weighing on my mind.  As you know, I don’t like to waste things but I couldn’t work out how we could use it all.  We won’t be having cheese and biscuits with anyone, any time soon. 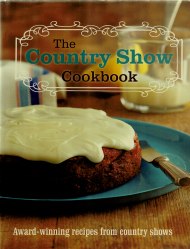 Then, the other day, I was flicking through a great book I found at an op shop years ago called The Country Show Cookbook.  As the title suggests, it is a book of award winning recipes from country shows.  And it is a beauty.  I was looking at it as I was going to make some rock cakes and I had used the recipe from the book previously.  I was just checking to see if I still thought it was the best recipe I had.   I concluded it was and then started flicking through the pages and came across a recipe for Worcestershire sauce. The recipe caught my eye as it included ½ cup of plum jam.  Now I was really interested. I had considered making Worcestershire sauce several times before but had never got around to it.  Here is the recipe.

Now this looked good, and it was an award winning recipe, but it only used ½ cup of plum jam and remember, I had 500g of plum paste.

So, as you do, I went on-line and started searching for recipes. There appeared to be two types of recipes: those similar to this one and, those with anchovies and tamarind.  I have a bottle of Lea and Perrins Worcestershire sauce in the cupboard which, according to the label, is “the original & genuine” Worcestershire sauce.  The ingredients are malt vinegar, spirit vinegar, molasses, sugar, salt, anchovies, tamarind extract, onion, garlic, spice, flavours. So it looks like the anchovy and tamarind recipes win but they don’t require plum jam, so I wasn’t interested.

I kept on looking and found a recipe on Australia’s Best Recipes site which, apart from the quantities, was very similar to the one in my cookbook.  It really got me excited as it required 440g of plum jam.  I was sold.  For some reason, I wasn’t too perturbed by the fact that it also required 4 litres of vinegar.   I read the comments on the recipe.   Apart from the people who noted it was not real Worcestershire sauce as it didn’t include anchovies and tamarind, everyone else said it tasted just like the real thing.  I seemed to skip over the fact that most people also said that they halved the recipe.  I wasn’t going to do that, I had 500g of plum paste to use up!   A few people also said that they used golden syrup instead of treacle which I liked the sound of.  When I cleaned out the pantry a couple of weeks back, I noted that I had a small amount of molasses and one and half jars of golden syrup.   “I will finish off the molasses and then use the Golden Syrup,” I thought.   I went into town to see if I could get the vinegar.  As luck would have it,  there were 2 x 2 litre jars in the local IGA.  I was set.

The recipe was fabulous.  It does in fact taste just like Worcestershire sauce, notwithstanding the different ingredients and, it was dead easy to make, but what in God’s name am I going to do with eight bottles of Worcestershire sauce!  We use about half a bottle a year 😦 .  Why I didn’t focus on this fact rather than the fact that I would be using most of my plum paste, I will never know.  I am certainly very weird.

If you are interested in making the recipe I made 8 x 350 mil jars so either halve the recipe or make the recipe from my cook book – the method is the same.  The cookbook recipe will probably make about 500 mils which in any one’s language, is plenty of Worcestershire sauce. 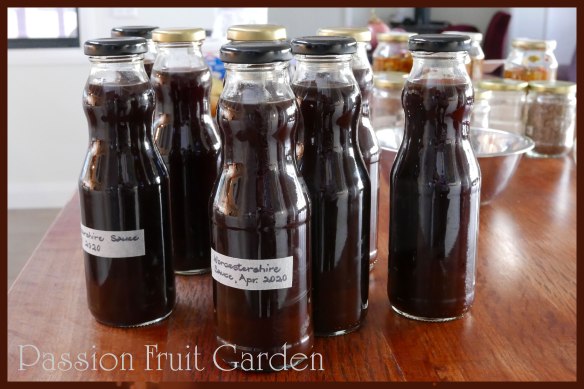 I am now looking for ways to use my eight jars of sauce.  I just found a recipe for a chicken marinade …. 🙂