I have cleaned out my pantry and I am very proud of myself.

We had stocked up on a few items and the pantry was getting a bit full and very messy so I decided to do something about it. I am so glad I did because I had a few unpleasant surprises.  I recently bought two cans of fish but during my clean out, I found we already had three.  Damn it!  I am so grumpy with myself.  I hate doing that.  It looks like we will be having salmon patties and salmon mornay soon.  I also bought a few tins of sardines and there was one already there but, they are for the dogs, and will go quickly, so I am ok with that.  And I found some out of date noodles.  I will have to learn to practice what I preach 😦 . They may be a little too old to save.

We have two of a few things but I knew that was the case.   I have been bringing opened sauces and condiments etc back from our flat.  They weren’t being used quickly enough and I was worried about how old some of it was getting. But why I have two unopened jars of tamarind, I will never know.  I never use the stuff.

I found some truffle oil that some one gave me as a gift that I haven’t used as I don’t know what to do with it. I think that may be too old too, I may have to dice it.

The biggest shock was, I have just about every different type of sugar you can buy  – white, caster, icing, demerara, raw, light brown, dark brown, light muscovado, palm, jaggery and for good measure, a bag of dextrose !!!  I am totally ashamed of myself.  I knew there was a lot there but that is too much!  I really must do something about it. 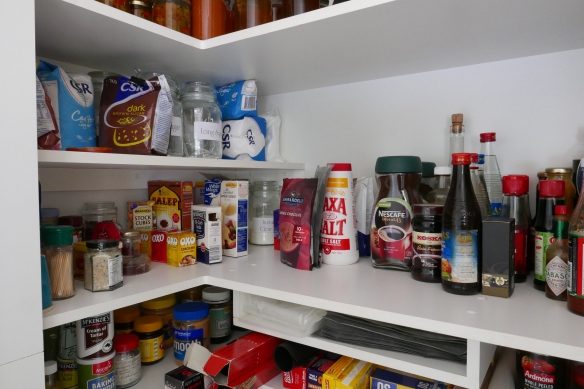 Once the pantry was sorted I was back to pressure canning.  I have done another six jars of potatoes – I put Maus onto peeling duty 🙂 .  These ones look way better than the first lot as I used fresh boiling water instead of the starchy cooking fluid.

I also preserved four jars of rhubarb.  We don’t need it.  Normally, I would have given the fresh rhubarb away but because we are stuck here with no visitors, the options were: preserve it or ditch it.  I decided to preserve it.  I am going to break up the crowns this winter and only re plant a couple.  We are getting way too much rhubarb for our use.

I also pressure canned a few jars of onions.  I have preserved onions before and found them really useful, so I thought I would do a few jars ready for the winter stews. 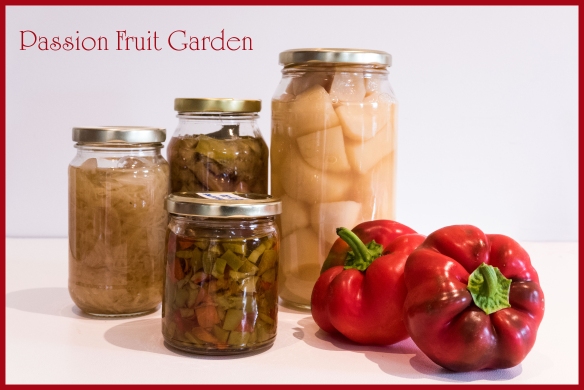 Lastly, there are capsicums and I mean, Capsicums.  Last spring I tried to be really smart and jump start the summer crop.  I especially wanted to grow chillies and capsicums.  Clearly, it was still too cold.  None of the seeds I planted germinated.  About one month later, I tried again.  Still no luck.  I had all but given up then, one day, I was seeding a bought chilli and capsicum and decided to collect the seeds and throw them in the vegie patch.  Not one chilli came up but about 50 capsicum plants did.  I planted out as many as I could find room for.  I now have hundreds of capsicums about to ripen.  I pressure canned 10 jars the other day and will do another lot in a few days.  I am just waiting for them to get a bit redder. I need a few hot days.  (I never thought I would hear myself utter those words.  These certainly are unprecedented days.)

What is the next job?  The kitchen drawers and then, the WIR.

Keep safe everyone and stay home, for your sake, and for the sake of others.