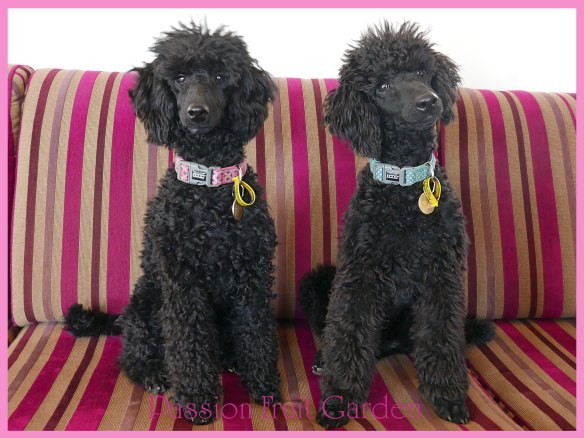 Well, hasn’t it been ages?  At least a year, in fact. My annual WordPress subscription came up for renewal not so long ago and I paid it, just in case I decided to keep blogging.  I have wanted to do a post for ages but I just haven’t got around to doing it.

Of course, I have excuses galore.  Firstly, we did go to England for three months and, as you can all imagine, life was chaos for a while when we got back. Then, before we knew it, it was spring and we were working our butts off on the block and then … we got two puppies.  If you are over 60, do not underestimate the amount of work two puppies can be.  Ours are nearly six months old and life is only now returning to normal.

First things first.  I may do a show and tell about our English trip.  Only our friend, Deb, has asked to look at our photos so, as punishment to the rest of you, I could be naughty and do a post with a selection of photos.

Secondly, and most importantly, I would like to introduce Sophie and Nigel.  They are gradually becoming lovely little dogs.  For months, they were just mad puppies – they fought, slept, wee’d and pooed.  Of course, we have had several near death experiences and multiple visits to the vet for typical puppy mishaps and ailments, the most interesting being when Sophie got a grass seed up her nostril (no, not her ear, her nostril).

I named Nigel after Nigel Havers, the English actor who is most famous for his role as Lord Andrew Lindsay in the movie, Chariots of Fire.  I thought he was very cute.  Sophie was just because I like the name Sophia.  A lot of people have commented on what a shit name “Nigel” is for a dog so I googled it to see how popular the name actually was.  I found this great article in The Guardian by Nigel Planer called “Why I’m glad no one wants to call their baby Nigel any more“.  It was written in 2017 and it was all about the fact that, for the first year ever, no one in 2016 called their baby “Nigel”. He was exuberant.  I must quote from the article because it is hilarious.

“I don’t know what my mum and dad were thinking of, calling me Nigel. Well, I do, I suppose – they thought it might add a bit of class to our altogether dull surname. A soupçon of suavity, a bit à la continentale. Because Nigel is basically an attempt to sound French. It was brought over here by the Normans – who Latinised it from the Viking Njal, or Irish Niall. Nigel is meant to give one a bit of status, or at least it was in 1066. So it’s had a thousand years to fester into a kind of revanchist gentrification. I know that revanchist is not quite the right word there, but a bit of naff Frenchification is what being a Nigel is all about. It’s a name on a parr with Julian, for flaccid pretension.”

I have barely stopped laughing since I read that paragragh.

Some of you may remember my beautiful boy, Jules – so named because my favourite boy’s name is “Julian”.  I think Nigel Planer may think my choice of boys’ names to be a wee bit pretentious. I am shocked.

As you can imagine for this time of the year, the vegie patch is producing like mad.  I have been blanching beans, corn and silverbeet on a daily basis and now the cherry tomatoes have gone berserk .  The amazing thing is, this is the main reason why I have, finally, decided to write again.  We have been inundated with beans and I have tried three new recipes, each of which was so nice I thought, “I should put this recipe on my blog so I can find it later”.  Alas, they are long eaten and I didn’t take a photo but I am determined to make them again and post the recipes.

Now to the little bit of wisdom.  A few weeks back, I read that commercial caustic oven cleaners are about 95% caustic soda (NaOH).  I further read that a 10% caustic soda solution will clean an oven tray just as well as the expensive commercial version.  I hate those oven cleaners because they pretty expensive and the nozzle always clogs up before you finish the can so I was excited to learn that their primary ingredient was something I have kilos of in the garage.

I am so angry with myself for not working this out years ago.  NaOH is an integral ingredient in soap making.  It reacts with oils (saponification) to produce soap. I made a 10% solution and cleaned all my oven trays in next to no time.  The fat just dissolved away.  Some bits which had carbonised were a bit stubborn but all came off just as easily as with the commercial oven cleaners.  If you are interested, you can buy 500g of caustic soda from your local hardware store for less than $5.00 and it will last you a very long time.  If you are going to give it a go, please remember, that just like commercial oven cleaners, you must wear a mask and gloves.

My next discovery was regarding a spot carpet cleaner we have been using to get rid of grease marks from our kitchen runner.  It has also come in very handy lately with two  puppies.

After my discovery with the oven cleaner, I wondered what could be in the carpet cleaner and my mind kept going back to alcohol (no, not the drinking type) for you see, alcohol dissolves soap.  It is used to make clear glycerine soap.  Then, the last time we were in Perth, Maus went back to the carpet shop to buy another bottle and the guy jokingly asked her if she wanted a mixer to go with it.  Instantly, I knew I was on the right track with alcohol.

The other day, I was reading a forum to get ideas about how to get smudge marks from the puppies’ paws and saliva, etc., from our floor tiles.  We had washed and washed the tiles with various commercial floor cleaners and still they looked as dirty as before we washed them.  One guy suggested boiling water and a slug of metho.  Jackpot!!  Methylated spirits is 95% ethanol and it is what I use when making transparent soap.  We washed the floors with hot water and a dash of metho and it worked.  We sprayed metho directly onto the tiles and then mopped them both by hand and with a steam mop and both methods worked as well.

Back to the carpet cleaner…  I decided to give metho a go.  I sprayed it onto a grease mark on our kitchen mat, rubbed it off and voila!  No grease mark. It also works with puppy urine.  You can buy a litre of methylated spirits at your local hardware store for $5:00-$6.00.

The moral of this story is: most expensive house cleaning items are made from one simple ingredient that has been around for years.  We are just being screwed spending a lot of money on them. 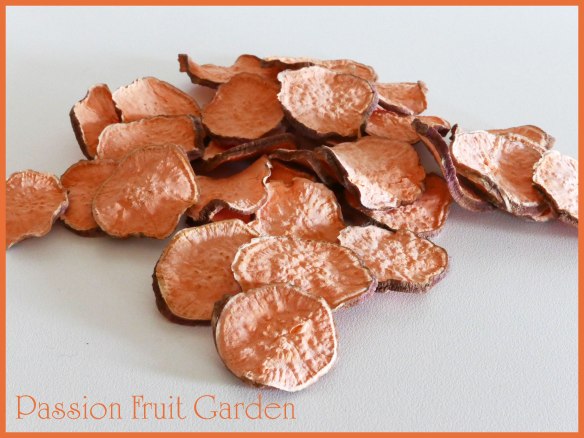 But wait, there is more.  This is a food blog when all is said and done.  Before they arrived, I read a lot of information about puppies.  Obviously, my dogs were going to be perfect in every way 😦  One suggestion that kept coming up was sweet potato treats – literally, dried sweet potato.  Even though I was very doubtful the pups would like it when they had dried liver and dried chicken as options, I decided to make some.  I can confirm puppies do, in fact, love dried sweet potato.

Hopefully, I will do another post before the year is out. xxxx  Love you all, Glenda

17 thoughts on “A catch up, an introduction and some words of wisdom”