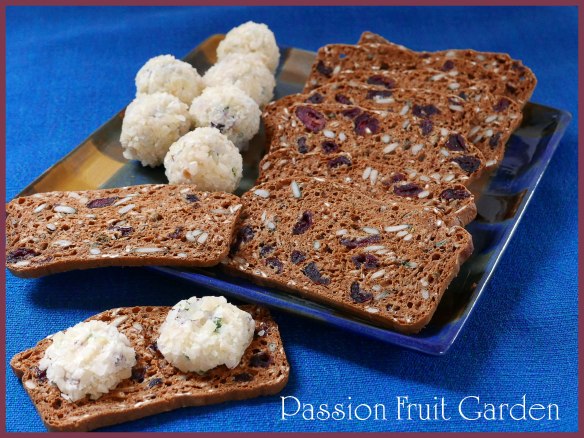 Today’s recipe is a homemade alternative to the fruit and seed crackers that are omnipresent in the supermarkets at the moment.  I was very excited when I found it and even more so when it turned out to be a dead ringer of the commercial version.

You know the crackers I am talking about.  They come in a variety of flavours.  The ones I have had in the house in the last week are:

There could be other varieties but I don’t know of them.   I think they taste great but, at $5.00 for 100g, the price is a bit steep.  The ingredients on the packet are flour, fruit, seeds, sugar, yoghurt, honey raising agents and salt.  How hard can it be?  On Boxing Day, I decided to seek a copycat recipe and it was easier than I thought.

Today’s offering is based on a recipe by Nagi, from Recipetineats, who based her recipe on one from Scott and Chris at Thecafésucrefarine.

Scott and Chris’ recipe was a take on their pumpkin & cranberry crisps.  Nagi adjusted it to reflect the crackers we have in Australia.

I think Nagi nailed it.  The crackers are indistinguishable from the commercial versions.  I made it exactly as she suggests and I have absolutely no complaints but, next time, I will make a couple of changes.

Nagi’s recipe includes a number of herbs and spices which are not included in the commercial versions.  At first, I wondered why she did this and then checked out Scott and Chris’ version.  She copied them straight.  I really don’t think they are needed.  The original recipe on which Nagi based hers included pumpkin puree, explaining the inclusion of cinnamon and nutmeg.  The turmeric, I am guessing, was for colour.  When I first took the crackers out of the oven, I thought I could taste the turmeric and pepper (I have pretty good taste buds).  When they cooled, I could only detect the cinnamon (which is nice) but there is no cinnamon in the commercial version and I don’t think it is appropriate.   Next time I make them, I will omit the spices.

I don’t know about the herbs.  I think I would include them only if I was making a fig and black olive version.

I also note that every packet, no matter the variety, includes flax seeds (linseed).  Next time, I will replace some of the oats with linseed.

The other change I will make is the size of the tin.  I used the loaf tin size suggested by Nagi but I think a 25cm x 8cm bar tin would produce a better shaped cracker.

Normally, I would make the crackers again with these suggestions and assess the difference before posting but we have so many crackers in the house at the moment, it would really be over-kill for me to make more.  I will do another post after I make the next batch some time later.