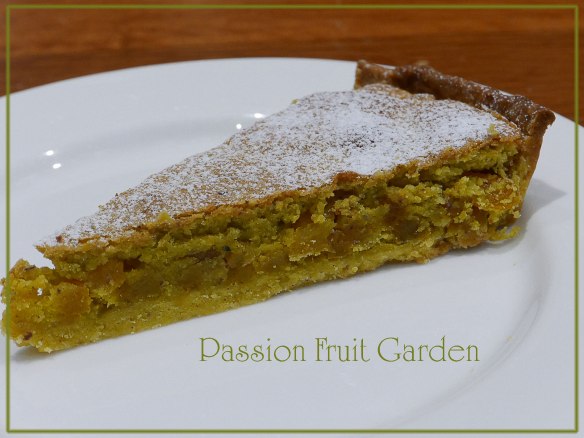 Hello, everyone.  Not only did I trick you, I tricked myself.  I thought I wouldn’t have time to prepare this post before we went on our holiday but, as it turns out, the day before we left was wet and I was stuck in a small flat.  Anyone who knows me would know that is cabin fever material, so I decided to prepare this post.

I am a fan of frangipane tarts.  I regularly make Damien Pignolet’s quince frangipane tart.  I like them because they taste great and are robust – you can make them the day before you need them and they taste perfect the next day, and the day after, and the day after that.  Better still, they freeze well.  This recipe was no exception.  I had never made a frangipane tart with pistachios but I was keen to give it a go and it lived up to expectations.  There was only one problem.

One of the ingredients is sweetened pistachio paste and Shane warned that it was an essential ingredient.  I have no idea where you would buy this so I decided to make my own.  I thought it would be easy but, let me tell you, it was not.  I have a Vitamix which can handle most things you throw at it but it wasn’t having a bar of the pistachio paste.  I followed this recipe.  Luckily, I halved the recipe so I didn’t waste 250g of pistachios.  The main problem was the oil from the nuts separated and there was no way I could amalgamate it.  When my Vitamix over heated, I decided to stop.  I had tried adding extra liquor and extra oil to make it softer so the Vitamix could cope but to no avail.  In the end, I took out a small amount of the paste to be used in the pie and made little tartlets with the left over pastry and the rest of the paste.  It tasted fab but was virtually solid.

I then took 20g (which I needed for this recipe) and some of the separated oil and put it in my coffee grinder and whizzed away.  It still didn’t fully amalgamate but the solid mixture was broken down into such small bits it was good enough for my purposes.  When I put it into the sugar and butter mixture, I put the tiniest bits in each time so it had no chance of clumping.  So, if you can buy the pistachio paste, I would.

Shane suggested serving the pie with whipped cream, icing sugar and orange blossom water – so I did.