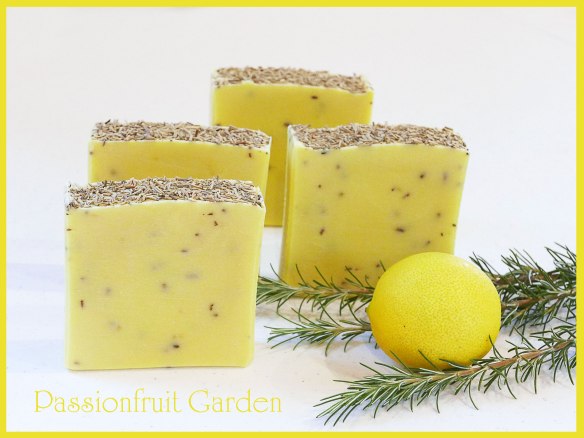 That title makes me happy too …  because it is true!

Soap is really taking over our house  … and garage.  There is barely enough room in our two-car garage for one car anymore.  I only have one corner as a workshop but it is expanding outwards.

I started off airing soap on top of the fridge, then Maus made me a shelf in the laundry.  One shelf!!  What was she thinking?  Then she acquired this wonderful 5-shelf display stand… and then, not so long ago, we bought another stand from Ikea.  Alas, the Ikea stand is nearly full.  I think it is time for another stall.

As I am sure you guessed from the props, the top soap is lemon and rosemary.  I got the idea from a soap in one of the hotels we stayed whilst in Tasmania.  It smelled divine.   It was a total guess what fragrance they used but mine smells exactly the same so think I guessed correctly.  It is Lemon Verbena. 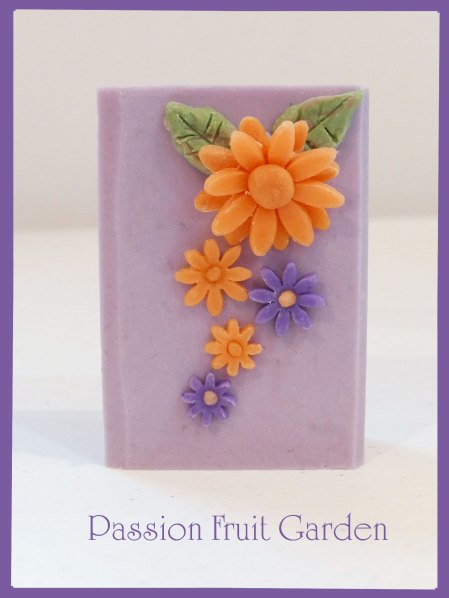 The fragrance for these beauties is Wisteria.  It is a lovely floral fragrance.  It did misbehave quite a bit (as florals tend to) but not enough to cause serious problems.  I am really into soap modelling, but I figure most people just want a rectangle bar of soap.  This design satisfies both.  I got to make lots of pretty flowers but when the flowers wear down, you will be left with a rectangle bar of soap. 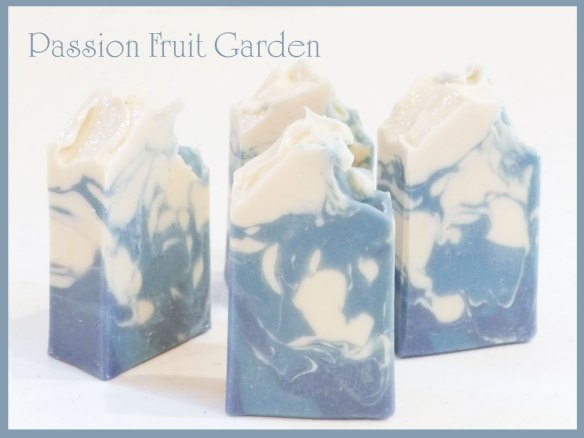 These soaps were the result of my first commission.  Thanks, Emily!!  Em has a beach house and wanted some guest soaps reminiscent of waves.  Not bad for a first effort but I reckon they can be improved.  I think less white next time. 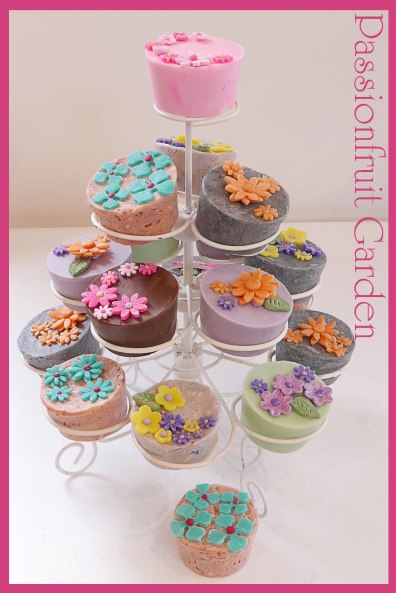 When you make soap, you tend to have bits left over.  Sometimes, you don’t quite get the calcs right and, most times, there are bits that you trim off.  I decided, when I could, I would make these odds and ends into little pots to sell.  Some pots are remilled and some are just poured excess soap.  All have the same ingredients as the bars.

At the last stall, I had them for sale for $3.00 but didn’t sell any.  Since then, I have decided to decorate them with flowers to make them pretty and try to sell them for 4 for $10.00.  People like a bargain.  Remember the run on the passionfruit? 🙂   If this doesn’t work, they will be for Maus and me.

Do you love my stand?  I found it at an Op Shop.  I saw a lady checking it out.  As soon as she put it down,  I shimmied over and claimed it.  It will be perfect to display my little pots. 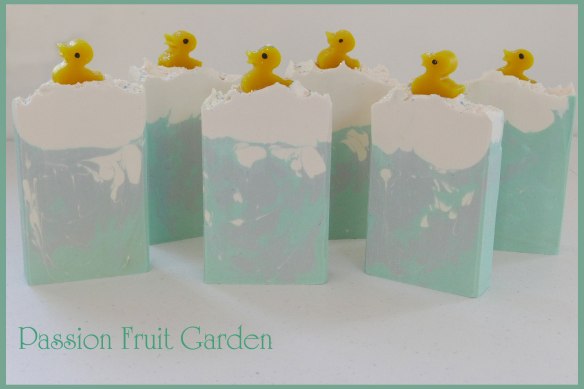 These are the soaps I made to distract me from the computer problems I had last week. I am a little disappointed with the colour of the water but, otherwise, I am stoked.  I made the little ducks using an ice block mould I picked up at an Op Shop.  They are very cute. 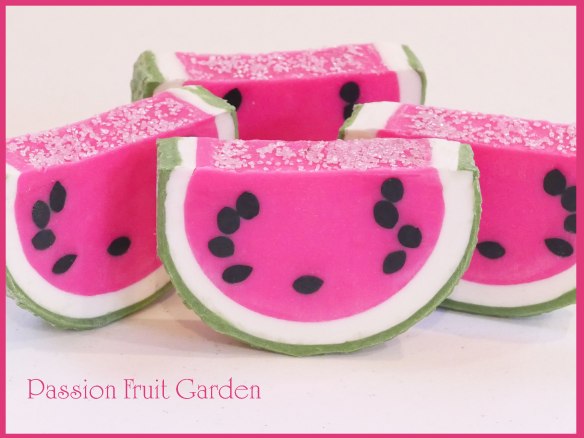 After the success of my watermelon soap at the Easter stall, I decided to make some more.  This design is much better.  The next version will be perfect (in my dreams). This time, I made the pink in the poly pipe mould Maus made me and then, when it was set, I draped the white and green soap over it in much the same way I made the rainbows in my Over the rainbow soap.  The first time, I put the white and green soap in and then poured the pink which made the bars smaller. Even though you can’t see it in the photo, the green soap is patterned.  The seeds were made with black (from charcoal) melt and pour soap.  It worked a treat.  Next time, I think I will only have seven seeds and I will skip the sugar crystals on top.  They caused a lot of problems along the way.  I can always add glitter at the end. 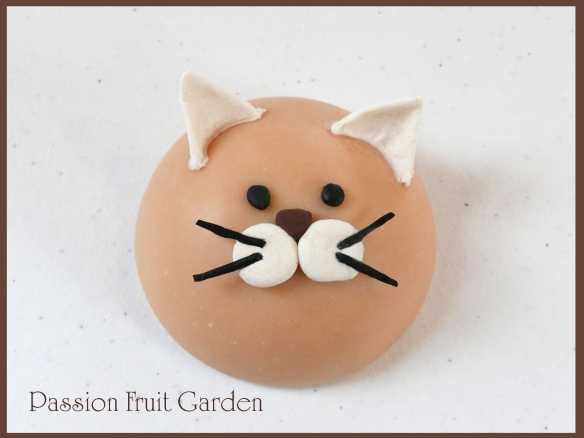 More soaps for the kiddies.  Making animals is so much fun.  This is Felix.  I made him just after my last soap post.  Mandy, from The Complete Book, suggested I make a kitty.  It is amazing how, with just a few changes, you can make a face that clearly looks like a different animal. 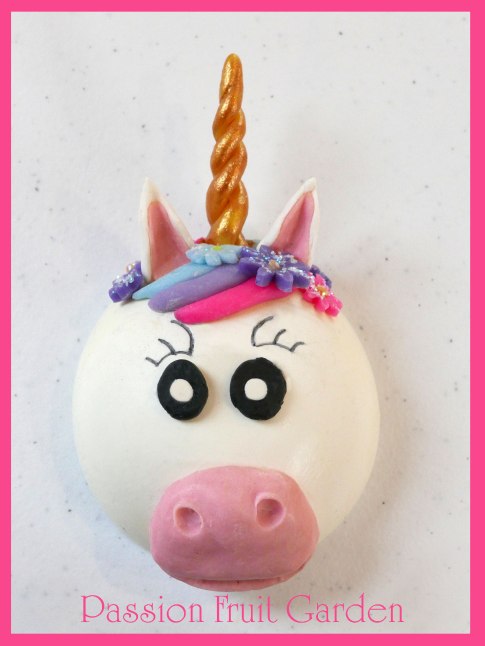 I pre-empted a unicorn in my previous soap post.  I was very ambitious and was going to make six, thinking they would be popular with the girls.  After making one, I lost my confidence.  I drew a very cute horse but it didn’t transfer well onto a round bar of soap – horse faces are oval not round.  I ended up making three.  I’ve named her Sparkles.  We’ll see if anyone loves her. 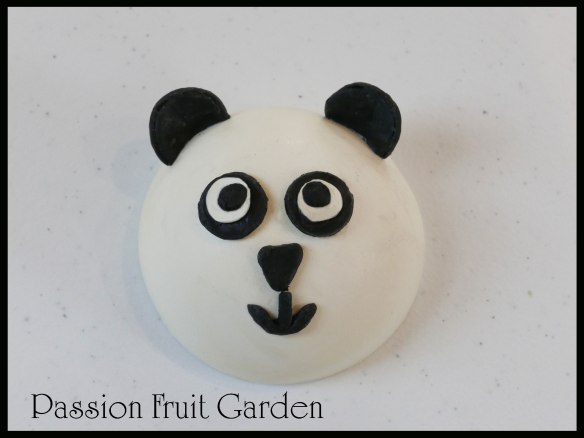 This is a panda.  I hope you guessed that.  And below is a koala.  They haven’t names yet.  Blinky Bill is a bit obvious for the koala – maybe I will go with Sidney.  The panda’s name will need to be a bit ethnic.  I thought about Xiang Xiang but he had a sad ending.  A possibility is Bei Bei which means precious.  I think that is nice. 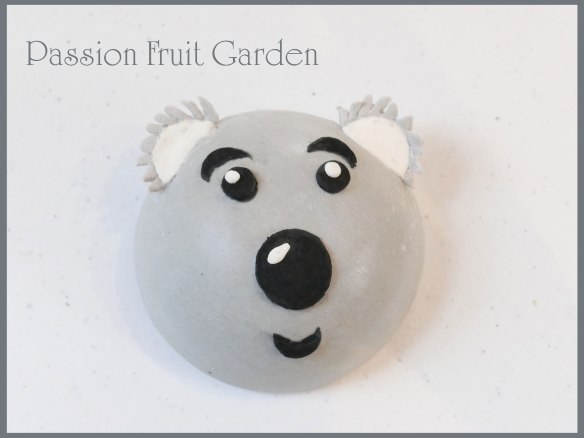 9 thoughts on “Soaping makes me happy”