It has been sooo long since I did an In My Kitchen post – 6 months, in fact.  To prove it, I have included this photo I took last May for my June In My Kitchen post that never happened.  Clearly, I decided to make tomato sauce out of the last of the tomatoes.  (Here is the recipe if anyone is interested.)  Before long, I will be taking photos of this year’s tomato harvest but, for now, I am buying them.  It breaks my heart to do so when I know that, in a few weeks, I will have so many I won’t know what to do with them all.  It is always the same.

There are several reasons for the lack of In My Kitchen posts but the main one is there has not been much new stuff in my kitchen.  I decided, last year, that our two kitchens were full.  Then we decided to down size our Perth residence so now my two kitchens are over full.  But this month, I do have a couple of new things. 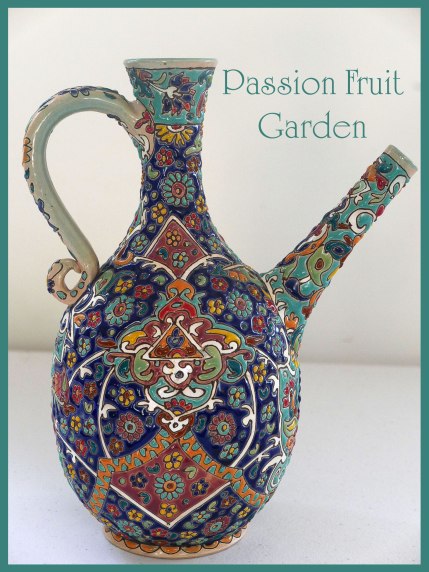 Firstly, in my kitchen:

Is my new pitcher I bought in Esfahan, Iran.  I was looking for a plate but we didn’t have much time for shopping and I hadn’t seen one anywhere so when I saw this, I decided to buy it.  I didn’t want to leave Iran without a souvenir.  At first, I thought I would use it for olive oil but one of my fellow travellers warned me against that by saying they bought a pitcher on a previous holiday to use for oil but it was not oil proof.  And once they had determined that, it was useless for anything else.  When I came home, I did a test with water.  I left it overnight.  In the morning, there was water around the base so there goes the olive oil idea.  Maybe it will just be for decoration.  It sure is pretty. 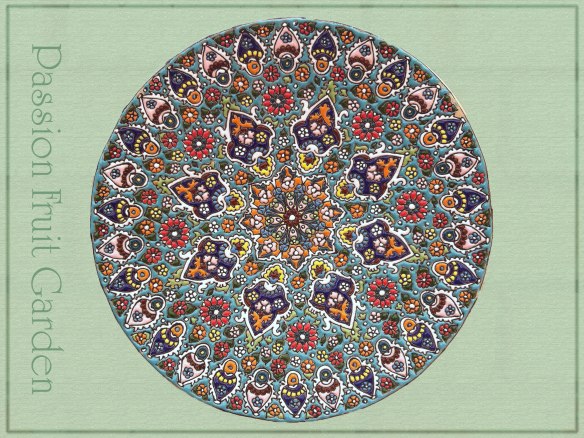 Is my new plate.  The day after I bought the pitcher, we went for a walk in Tehran in search of an ice-cream and came across a shop that sold, amongst other things, handicrafts.  I spied this magnificent plate and, within a few seconds, it was mine. 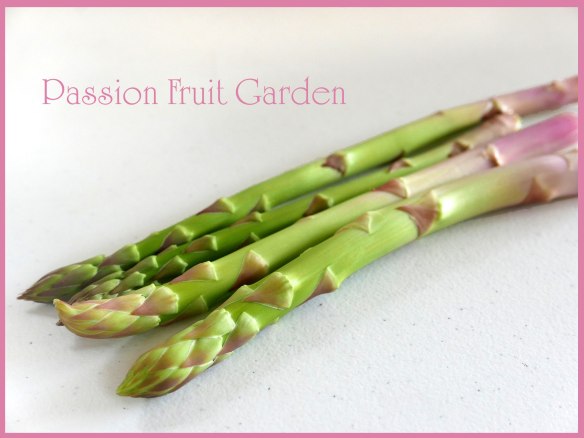 Is asparagus.  At the moment, the vegie patch is producing asparagus and snowpeas galore.  We are keeping up with the asparagus but losing the battle with the snow peas. As with most other vegies, they mature all at once.  We have been eating chicken with cashew nuts and snow peas more than I like to admit and having salads every other night. 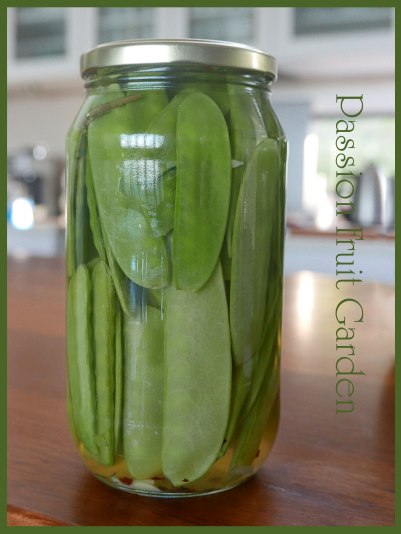 Are pickled snow peas.  I finally succumbed.
I picked about half a bucket the other day and we already had as many in the fridge.  I started looking at ways to preserve them.  We have, in previous years, frozen them but we decided we didn’t like frozen snow peas.  I found this recipe for pickled sugar snap peas and decided to give it a go.  I have no idea whether we will like them or even eat them but all it cost was the price of some vinegar so I thought I would give the recipe a go.  I will let you know what we think once we finish eating the fresh ones.

Are peas… well, sort of.  There have been so many snow peas we haven’t even been able to pick them in time and some have, actually, formed proper peas.  I do not eat pod peas but Maus does.  I shelled a bowl full, blanched them, and froze them.

Are avocados.  We are also getting avocados from our trees.  Avocados are my favourite thing to grow because they don’t ripen until they are picked.  We, usually, pick two every few days, giving us a continual supply of ripening avocados.  They started in September and will, probably, last another month.  That is not bad – free avocados for four months of the year.  We have had lots of salads of blanched asparagus, snow peas, avocado, salad onion and cucumber.  Soon it will be Greek salad every night. 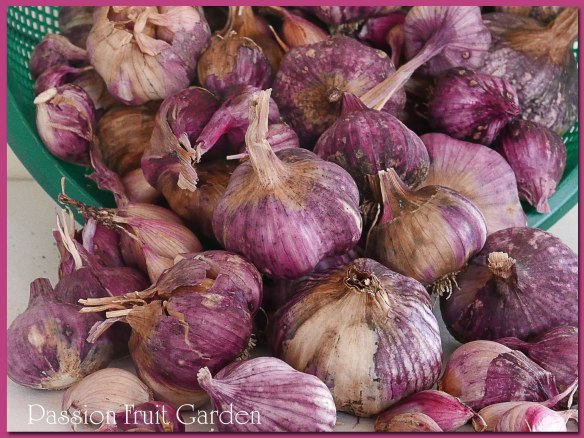 Is this year’s garlic harvest.  I have grown garlic every year since we established the vegie patch.  In fact, garlic was the initiative for the vegie patch.  Our friend, Sue, gave me a head of sprouting garlic and said, “Here, grow this.”  I did, and haven’t stopped.   We have not bought garlic since our first harvest. 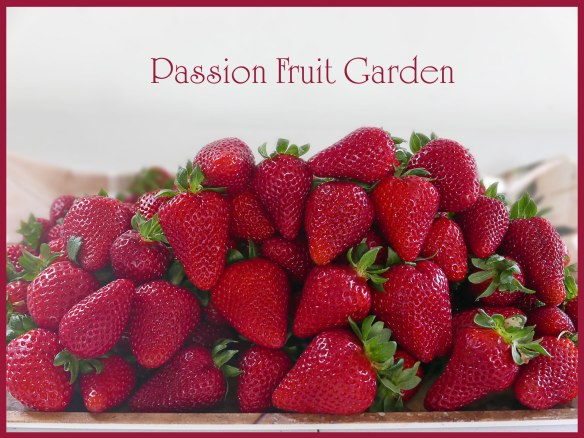 Are these magnificent strawberries.  I wish I could say I grew them but, alas, it is not true.  Strawberries have been a spectacular failure for me.  I grew them for two years.  The plants were huge and multiplied all over the place but we got very little strawberries.  The slugs got way more than us.

These strawberries come from Newy’s Vegie Patch in Kirup.  If you are driving through Kirup in summer, you must stop at the shop.  Don’t worry, you won’t miss it.  It is the only shop in Kirup.  These strawberries were picked the morning we bought them.  They are huge but, best of all, they are red all the way through.  I bought piles of them and froze them.  We have been having strawberry smoothies most mornings.  They also grow raspberries and loganberries.  Apart from the berries, the shop sells an impressive array of gourmet foods and vegetables.

Are these Boerwors.  For those who don’t know, Boerwors are a traditional South African sausage.  They are only a few of the many sausages Maus and I made one day.  We also made lamb and rosemary and hot Italian sausages.  Once I realised how to assemble the mincer, mincing the meat became a breeze but I don’t know so much about stuffing the casings.  And to be honest, our sausages aren’t the best.  I know what they are missing – fat!!  But it is so hard to actually add fat.  We bought the fattiest meat we could but still we should have added more.  Today, we made Merguez sausages because we are having Chicken roasted with 40 cloves of garlic and Merguez sausages tomorrow night.  We will give sausage making a couple more tries before we make a final assessment whether it is a goer as a hobby.  Thusfar, I have my doubts.

In my kitchen (but not for long):

Is my new toy.  It is a cheese knife.  Not the dainty sort that goes on a cheese board but a huge one that shops use to cut through big rounds of cheese.  I have been wanting one for ages.  We were in MBL (Master Butchers Limited) in Canningvale the other week buying the sausage casings and I thought to ask about one.  (They have a huge range of knives as they cater to butchers.)  I have been watching a particular soap maker’s videos and she uses one when cutting her soap freehand.  It will live in the garage with my other soap stuff.  I can’t imagine we will ever need it in the kitchen.

If you would like to see what is in other bloggers’ kitchens this month visit Sherry at Sherry’s Pickings.  Sherry now hosts In My Kitchen each month.