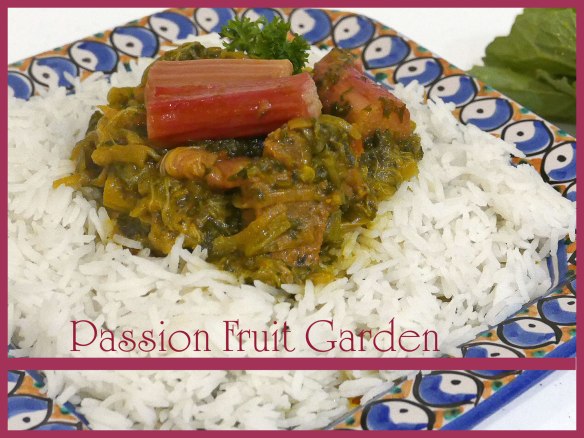 Firstly, I must apologise for the photo.  It was the best that I could do. 😦  And it took me ages to finalise.  I was determined to write a post on this dish but when I looked at the photos I took, there was nothing that looked remotely enticing.

Friends often say they like my photos and I explain to them that I usually take lots and lots of exactly the same thing and the one that appears in the blog is the best of the lot. Also, I do spend an inordinate amount of time in Photoshop correcting the composition, lighting, colour, focus, etc.  But there is only so much you can do.  If the photo is bad, bad, bad, you only end up with a well lit, well focused, bad photo. So it was with the head photo.

It started out looking like this.  I knew the stew would look shocking so I had the idea that the radishes would give the dish colour.  It needed something… but radishes?!  Now they were a bad idea.

I sampled many crops before I settled on the top photo. The problem was the mass of rice (we do like a bit of rice).  Finally, I decided a line through the bottom third of the photo would help distract from all that rice.  Like I said, I didn’t have much choice.  All my photos were shockers. 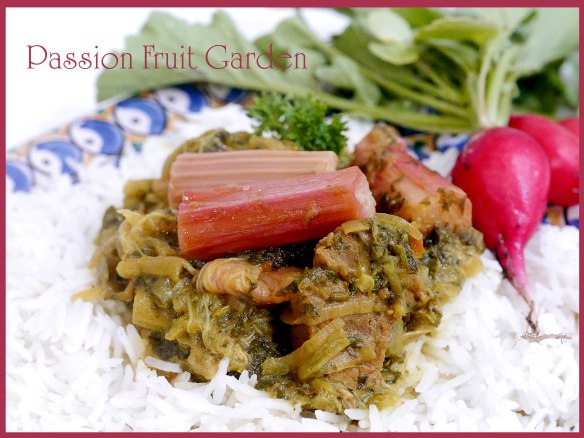 Check this one out.  Oh my gosh! What was I thinking?  A close up of a green mass with a barely washed radish was a very bad idea.

But in my defence (ignoring the radishes), it looks like it is – unappetising.  No newly picked radish or well thought out cropping will change that 🙂

I saw this recipe in my new favourite book, Food of Life by Najmieh Batmanglij, and I had to make it.  It is Rhubarb Khoresh.

A few years back, I bought two very small rhubarb crowns from the local nursery because Maus loves rhubarb.  I made her swear that she would eat all the rhubarb I grew – in my dreams.  Before long, I was cooking rhubarb every other day, then I was preserving it and then giving it to whomever passed our way.

Therefore, when I saw a savoury use for rhubarb, I was keen, very keen in fact.  It all made sense.  Rhubarb is a vegetable, not a fruit, so why not?  I was so keen, I doubled the recipe,  my logic being it wouldn’t take much longer than making the single version and we will have meals in the freezer for days when no-one feels like cooking.

“Khoresh” is Farsi for a braise or stew.  This did concern me a bit since rhubarb ripens in summer here and we usually eat braises or stews in winter, but I wasn’t going to be deterred.  Out came the very neglected slow cooker.  It only gets a look in when I am making hot process soap or, if in summer, I see a recipe for a stew I can’t wait to try.

I had to go shopping for some of the ingredients.  We didn’t have any onions and we were short on parsley.   We do have 8 parsley plants but since I bought my new book, each plant is denuded.  Just about every recipe in my book calls for a lot of parsley. The plants are so denuded, I didn’t want to risk cutting any more from them.  The recipe calls for 3 cups of chopped parsley or 250g.  For some unknown reason, I was certain 250g, when chopped, would not yield 3 cups; so I bought more, much more – about 500g.  I left the store with all the parsley Bridgetown had – two large shopping bags full.

That night, I decided to double the recipe.  I must admit, I was worried we would not have enough parsley but I need not have been.  I only used about half of what I bought.  I had enough parsley for 4 times the recipe which would have been 10 meals for Maus and me.  I was having a bad day.  But I was still enthusiastic.

The alarm bells began to ring when I decided to taste the rhubarb.  Has anyone ever tasted raw rhubarb?  If not, let be tell you, it is bloody sour.

So … the recipe.  I did not like it.  It was very sour.  Maus, the fussy one, strangely ate all of hers (though she took a very small serving) and looked at me strangely when I complained about it being sour.  It was me, for a change, who tried the “I am not very hungry” ploy.

If you have a pile of rhubarb and decide to give it a go, be warned.  Rhubarb (without sugar) is very tart.  At the end, the instructions say if the khoresh is too sour add a tablespoon of sugar.  Trust me, add the sugar, and maybe some more. It will be sour.

You are supposed to serve it with chelow (saffron-flavoured steamed rice) but that sounded like way too much effort so we just had steamed rice.

*These are 15 mil tablespoons.

**The instructions are for a slow cooker on “High”.  Adjust the timing if you are cooking the khoresh on “Low”.