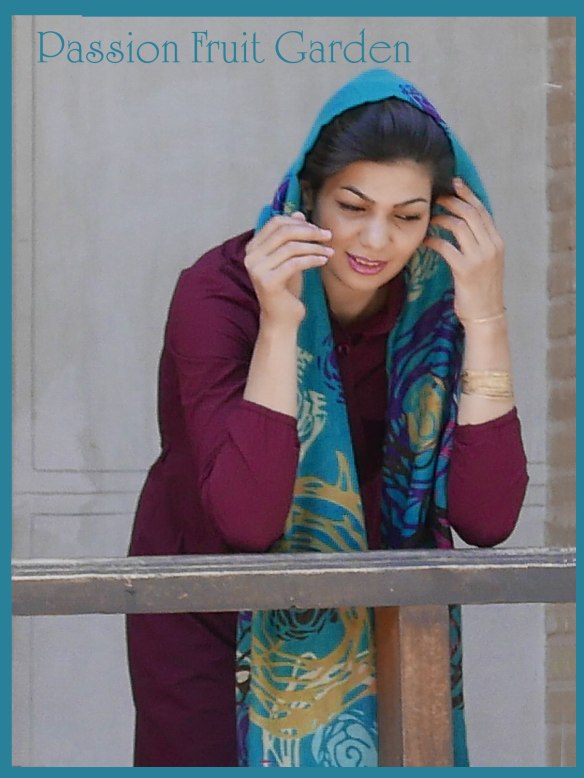 I still intend to do one more foodie holiday post but I have been prompted to write this post because of the comments I have been receiving when I tell people I have been to Iran.  I have been asked time and time again, questions like “Was it safe?”,  “Were there police/soldiers/guards everywhere?”  I was chatting with my hairdresser the other day and I don’t think she believed me when I said I did not see one woman wearing a burkah – ie, the full face covering garment.

It got me wondering, why do people think this way about Iran?  There are a few reasons I can think of:

So why is Iran a baddie and not a goodie?  Now, I don’t pretend to understand all the politics involved but my superficial understanding is: because it has nuclear power (note: not nuclear weapons) and the US does not think it should.  But we don’t classify the following countries which, according to Wikipedia, have nuclear weapons as “evil”: USA, Russia, UK, France, China, Israel, India, Pakistan & North Korea (Oops, North Korea may be an exception). 🙂 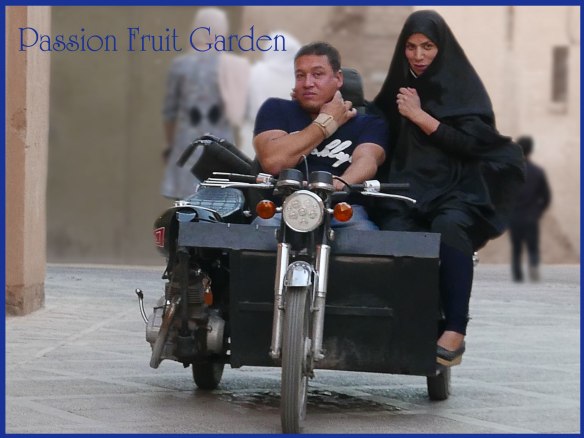 For the record, Iran is a very safe country to visit and the women do not wear burkahs.

I did not see any women who covered their faces.  The law requires women to cover their legs and a piece of clothing, called a manteau, is required to be worn as an over-garment.  Hair is to be covered by a scarf.

About a quarter to one third of women wear a chador which is a full-body-length semicircle of fabric that is open down the front. This cloth is tossed over the woman’s head and she holds it closed in the front.  I did ponder whether all the women who wore a chador did so because they were particularly religious or whether, to some, it was a convenient way to follow the rules.  If you want to go out, you don’t need to worry what you are wearing.  You can just throw a chador on and you are ready to go. 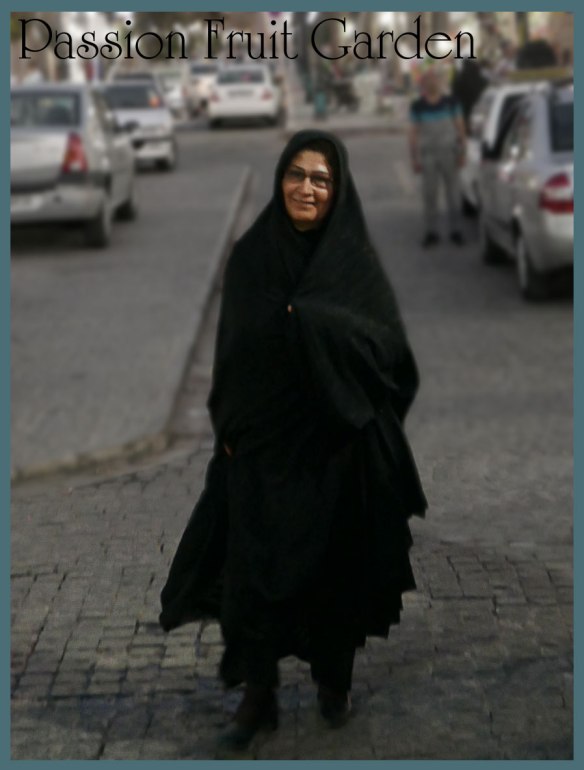 Many Irani women (especially, the young) interpret the rules very broadly. They are like most other young women – they are interested in fashion and want to look pretty.  Our travel guide told us that more than 85% of young Irani women (and a decent number of young men) have had a nose job.  They wear their nose bandage with honour.   I saw quite a few young women with pixie noses that did not look quite right. 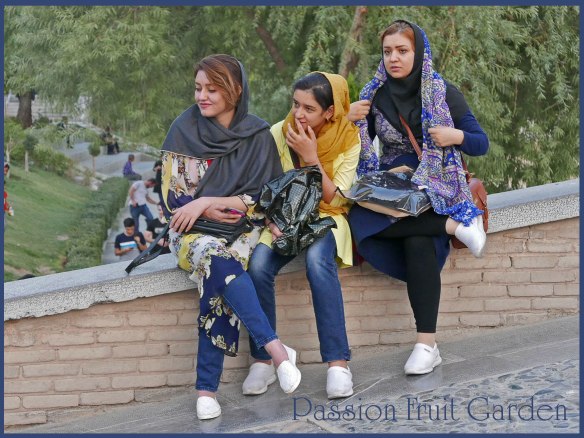 I adore this photo because it says so much. Clearly, the three girls are friends.  They are all wearing the same style of shoes (They must be fashionable).  Something seems to have caught their eye.  Because of what the girl on the right is about to do, I wonder whether it is a boy.

The girl on the left is playing a game a lot of young people play: how far back can I push my scarf without it falling off.  The girl on the right is much more conservatively dressed but check her out. 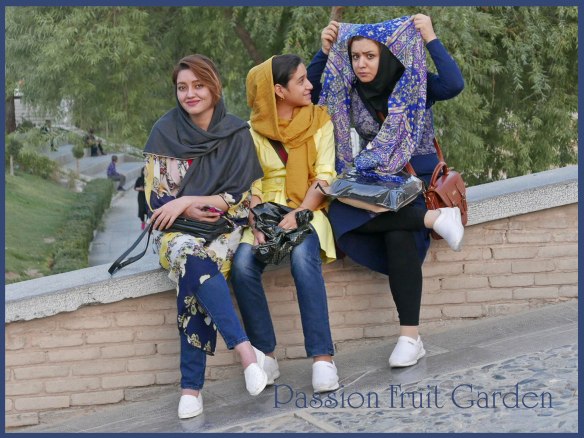 Look, it’s the scarf flutter.  You see this all over Iran, young women flapping their scarves.  I wonder whether it is a mating call, much like a western girl’s hair flick.  🙂 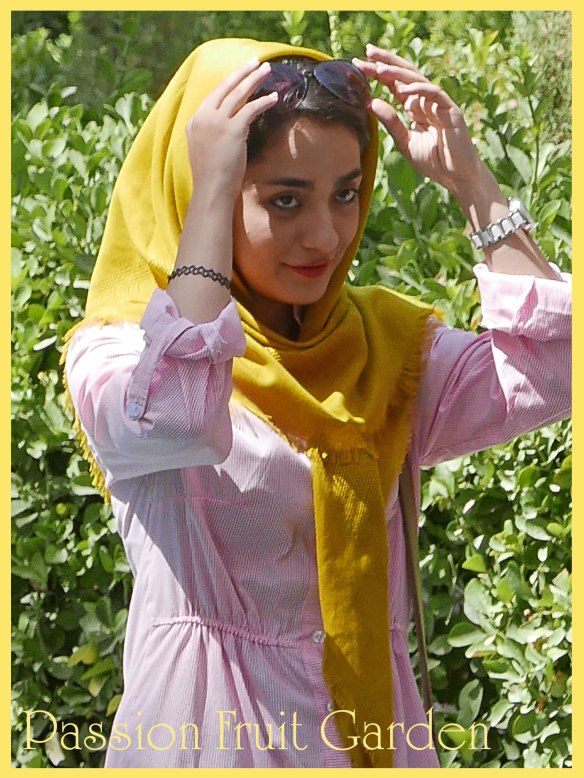 A young beauty posing for a photo and adjusting things.  Is a scarf flick next?   The yellow certainly says, “Look at me, look at me”. 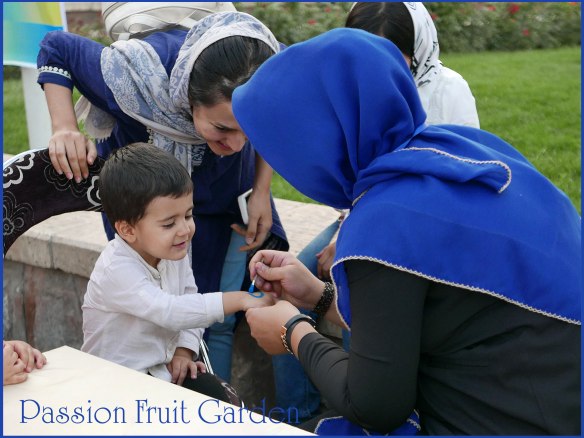 I like this photo because of the look on the little boy’s face and that on his mum’s.  They are both pretty happy.  The lady doing the painting was also painting faces but I didn’t get a shot of that.  It is the same all over the world. 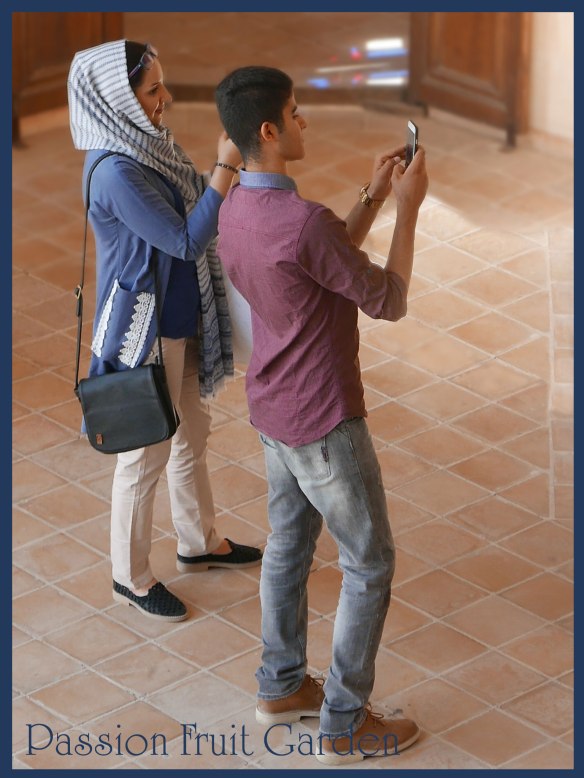 I assume these two were taking selfies, a very popular past-time in Iran.  The smart phone has well and truly arrived. 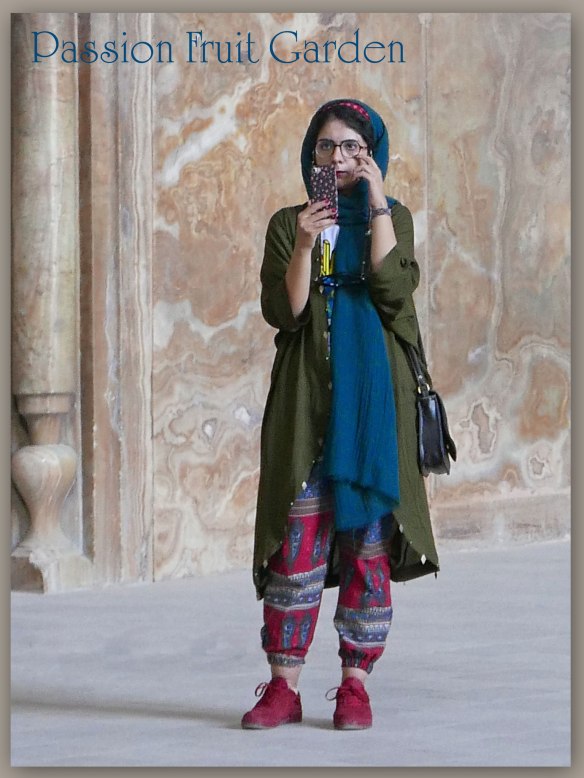 I am not sure whether this young woman is on Face Time or taking a selfie.  I just love her gear.  This is exactly what the young were doing everywhere.  They were being very, very cool but still dressing within the rules. 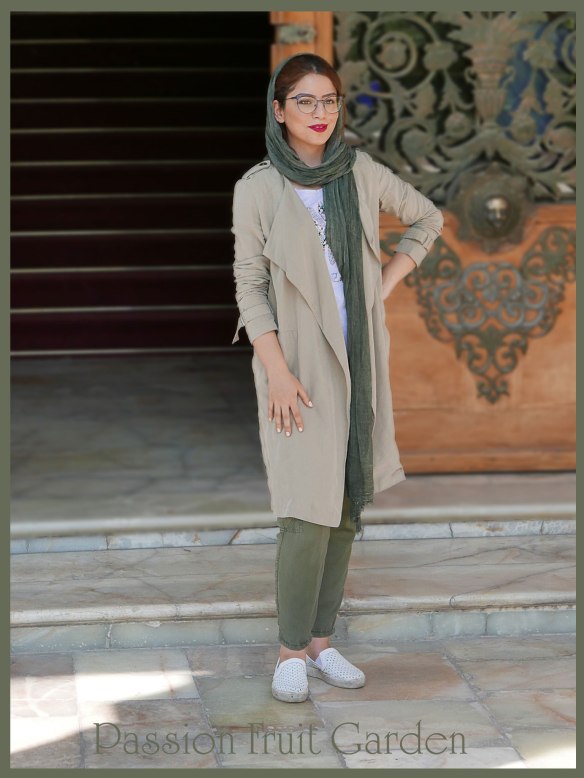 Another very stylish interpretation of the rules – she has everything covered, the trousers, the manteau and the scarf.  I was able to get this perfectly posed picture because she was posing for someone else.  She didn’t see me snap on the side. 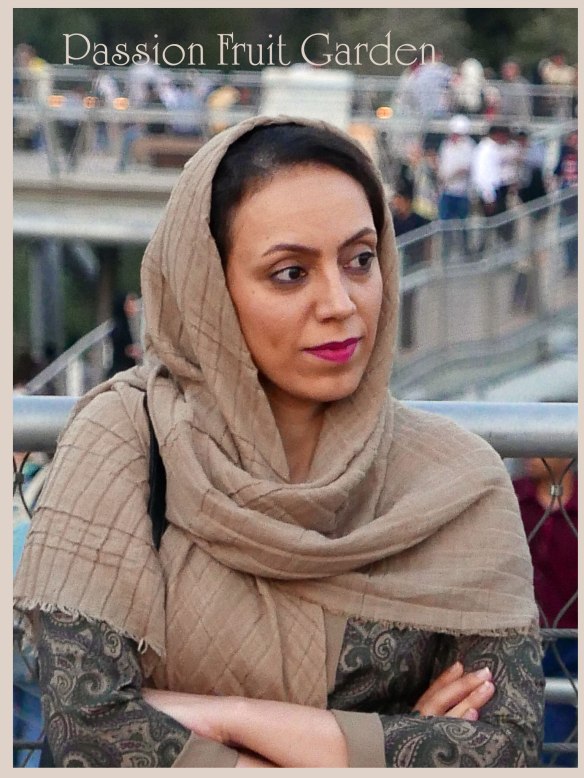 Another lovely lady.  She doesn’t look like she is posing.  Maybe she was waiting for someone. 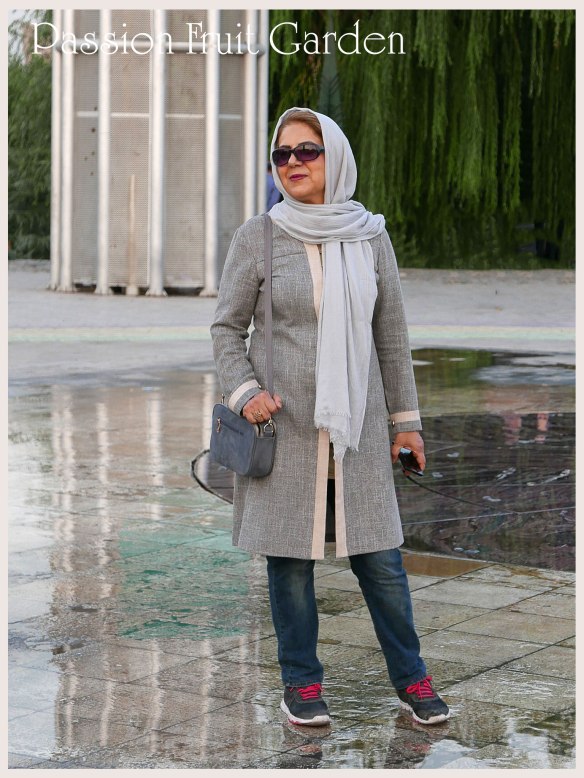 Now this lady was posing – someone else was, definitely, taking her photo. 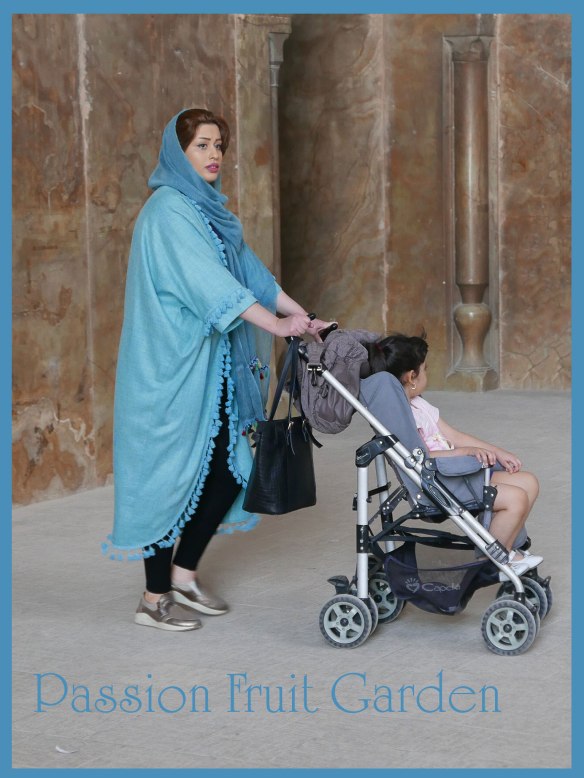 One very elegant mum but I don’t know about those tassels. 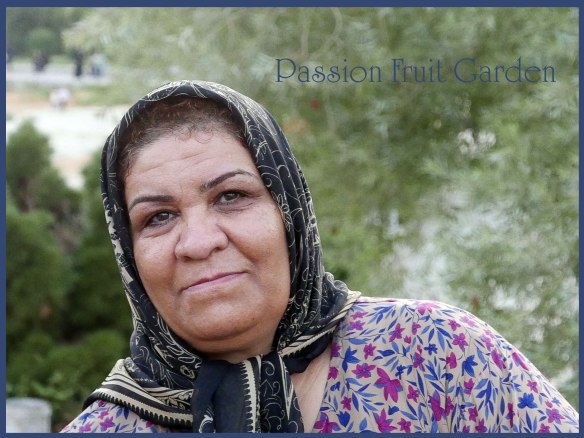 I snapped this lady, very quickly.  I was lucky to get it.

You may wonder why there are so many photos of young women and not so many of older women.  It is because the older women didn’t seem to be so vain.  They weren’t spending their time posing for others so it was much harder to snap them without intruding.

I hope these photos have helped dispel any misconceptions you may have had about Irani women.

19 thoughts on “The women of Iran”