Hello, everyone.  I am back from my holiday.  People have asked me whether I had a good time.  I don’t know the answer to that question.  I am certainly glad I went but it was hard work in more ways than one.

My favourite country out of the four I visited was Iran.  Azerbaijan was also a pleasant surprise but we were only there are few days so it is hard to make a call on such a short stay.

The main thing Iran has going for it is its people.  They are so friendly and welcoming.  People in the streets come up to you and welcome you to their country.  I heard a thousand times, “Welcome to Iran”, “You are welcome,” and “What country are you from?”  Mothers would thrust their young forward to speak to us in English, then burst with pride when we could understand them.  As we walked past, a group of elderly men, sitting on benches in a park, burst into song for our benefit.  Everyone was cheery and appeared optimistic for the future.

Here I am (on the right) with my friend, Sandra, looking very modest.

All in all, it was a very pleasant experience.  There were only two negatives – no alcohol and having to wear modest clothing and a head scarf.  The lack of alcohol made meals a very quick affair.  There was no dawdling over a lovely shiraz in Shiraz.  We even tried to get a non-alcoholic version just so we could say “we had a shiraz in Shiraz” but it appears they don’t even make non- alcoholic wine.

And, if you thought about the reason women have to wear a head scarf, you would get grumpy so it was best not to think about it.

Anyway, I thought I would bore you all with a few photos of my trip.  Since this is a food blog, I have kept to a food theme.  All photos are from Iran.

I just adored the spice shops.  I wanted to buy everything but I tried to restrict myself to what is hard to find in Perth or what, comparatively, was ridiculously cheap.

Of course, I bought saffron and rose petals (they were both cheap, cheap, cheap).  I also bought borage flowers – they looked so pretty I was sure I could use them on my soap.  I bought two dried limes – the dark one to the right of the photo and the normal coloured ones in the centre front of the photo.  I have seen them in recipes but I haven’t seen them in shops in Perth.  Alas, only the quarantine man will get to try them out – he nicked them.  I also tried to buy the wild thyme which is used in Lebanon to make Za’atar.  I bought something sold to me as “Iranian thyme” – I have no idea what it is. 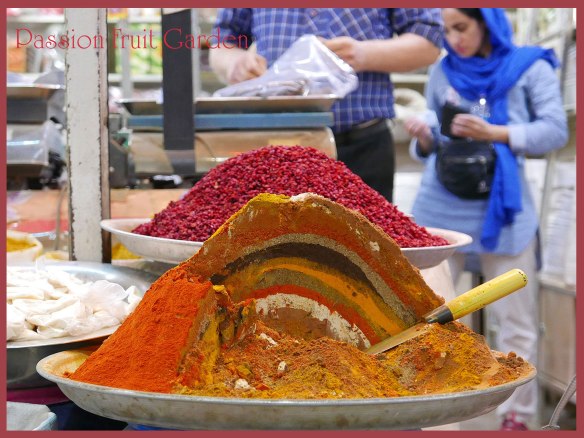 When I was buying my herbs, a lovely customer laughed at me for buying only 2 limes.  Clearly, the locals buy them by the bag.  She noticed, however, that I was also buying borage flowers so she insisted on giving me a recipe for borage and lime tea.  She warned me, though, not to have more than one in 24 hours as it is very strong.  I didn’t have the heart to tell her the borage was for my soap.

Just look at all that cinnamon, would you?  It would cost a fortune here.

I know a lot of people who read this blog are partial to a bit of cookware.  Well, this shop had it all.  I didn’t have time to really go through everything but, clearly, it was a treasure trove.  On the right, I spotted some pots, the design of which was all the rage in the 70’s, and orange features quite strongly.  🙂 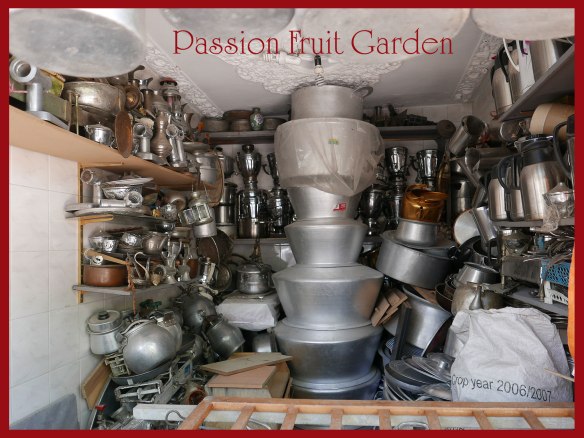 The stuff goes all the way to the ceiling.  I don’t know what would happen if you wanted something at ground level.  Check out the beautiful ceiling.  We would kill for a rose and cornices like them.

Pink pots, anyone?  Why not? 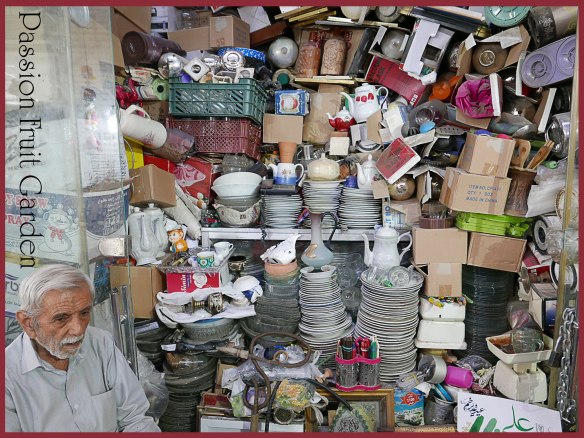 Now you have your cookware, what about some crockery?  I bet if you had all day you would find a treasure or two in here.  I have my eye on that dish in the centre of the photo, to the right of the blue and white tea pot.  I have no idea what it is but I would love it.

This pastry shop was up the street from where we had dinner one night.  After dinner, San wanted to buy something yummy from this shop but it was packed with people.  You had to order what you wanted, pay for it at the cashier and then pick up your order, all pretty tricky when the place was super busy and you don’t speak Farsi.  Oh well, a photo will have to do. 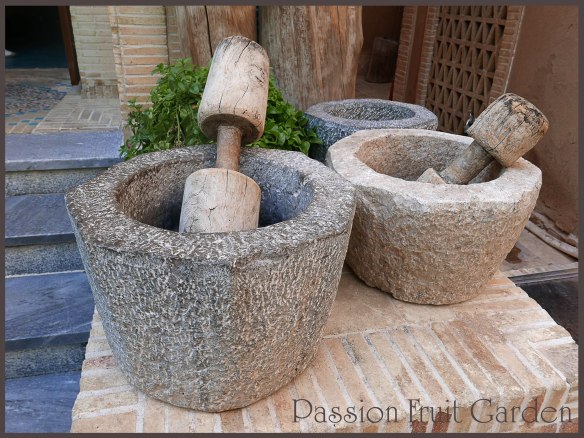 I have absolutely no idea for what these mortar and pestles are used but they sure are huge.  I would have loved to bring one home but they wouldn’t fit in my bag.

This was my favourite meal the whole time I was in Iran – koofteh.  I guess every country has a version of meatballs but these were pretty special.  They are made of meat and rice (and lots of herbs and spices), stuffed with nuts and dried fruit and then poached in a broth.  That is a tomato sauce and saffron rice on top, with a sprinkling of barberries.  They were so good, I thought I would make some once home.  I found a recipe on the web but, geez, it looked like a lot of work so maybe I won’t. 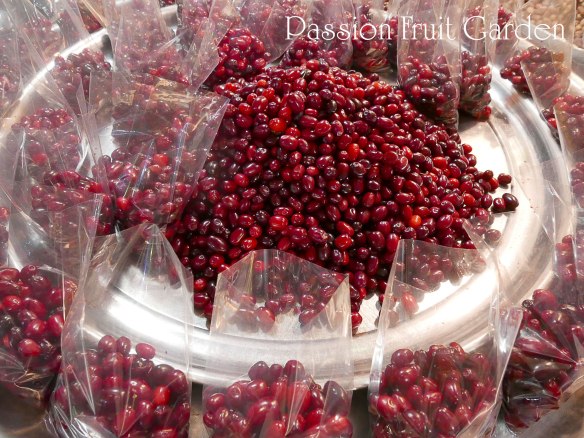 I took this photo because they looked beautiful and I didn’t know what they were.  Turns out they are fresh cranberries.  I tasted one – they are pretty sour but, oh, so pretty. 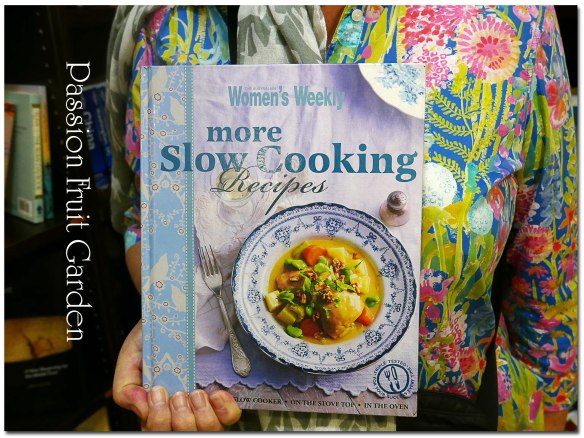 When I was in Iran, I really wanted to buy a local cookbook in English.  I figured my best chances were in Tehran so we checked out a few book shops when there.  As you can imagine, there weren’t many books in English.  In fact, we saw four, one of which was this Australian Women’s Weekly book.  We could not believe it.

Since my return, I have bought myself an Iranian cookbook from which I am sure to feature a recipe very soon.