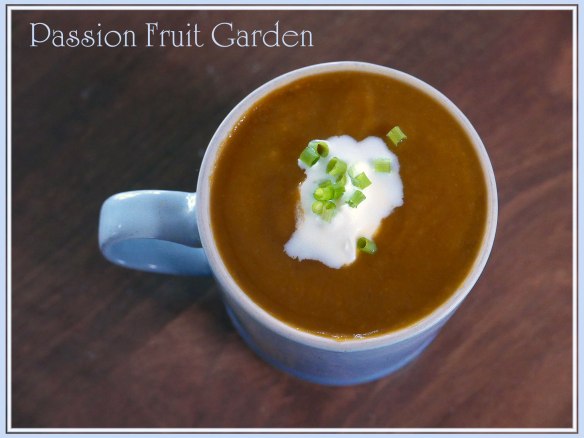 Everyone has their favourite pumpkin soup recipe.  My favourite is one I have posted before – Pumpkin, cashew and coriander soup.  It is a beauty (check it out here) but it does take a bit of effort.  And there are plenty of times when effort does not figure.  For those times, I have been dreaming of a recipe my mum used to make.  I had it hand written in my recipe book but somehow I lost it.  I did ask my sisters but to no avail.   I remembered the ingredients – chicken stock, pumpkin, tomatoes and onion but I couldn’t remember the proportions.

The other day, I walked under the house and saw 10 large pumpkins sitting on an old bed frame (which Maus got from the tip and serves as my vegetable airer).  They are the result of a pumpkin plant that self seeded in my neglected summer vegie patch.  Originally, I grew pumpkins because I put it in the dogs’ food but we don’t have dogs any more.  We don’t eat much pumpkin so they have just been sitting on the frame forgotten.  I decided to make pumpkin soup.

I searched on-line for another recipe I have been using and noticed a hit on Google for pumpkin and tomato soup – one click and I had it.  I was very excited.  It was the recipe mum used.  This recipe is dead simple and very tasty.

Now that is an exceptionally quick and very tasty pumpkin soup recipe.  It is the only recipe I used to make until I lost it.  The only problem is, I have 10 large pumpkins and one kilo of pumpkin was not going to put much of a dent into that pile so I decided to make five times the recipe and pressure can it. 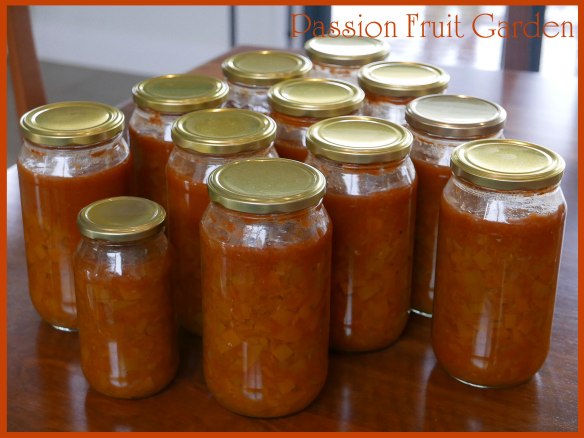 Five times the recipe made eleven and a half litres of soup.  We have tested the soup and it is as good as I remember.  It was so successful I have bought five more onions to make another 5 x batch tomorrow.

I have already written a detailed post on how wonderful my pressure canner is (check it out here).  If you have a vegie patch, I suggest you really consider a pressure canner. No matter how hard you try, you always end up with a glut of vegetables and there is only so much stuff you want in your freezer.  They are a bit nerve racking at first but they are easy to use and it is a great way to preserve food.

My earlier post includes detailed instructions on how to can soup.  If you are considering canning this soup recipe, please, read that post before proceeding.  Here is an excerpt from it.

The critical thing with pressure canning soup is:

There are only two things to remember.  You cannot blend the ingredients; nor can you thicken the soup, until you open the jar.  This is because blended or thickened soup is too thick to reach the temperatures needed to kill all possible bugs.  But this is not a big deal.  When you open a jar, you can easily use a stick blender in the pot or bowl you are heating it up in.  If a thickener is called for, you can add that at this stage, too.

I followed the instruction in my previous post.  The only difference was this time I used litre jars rather than 500 mils jars.  Litre jars require one inch head space to be left and to be processed in the canner for 80 minutes at 11 lb pressure.