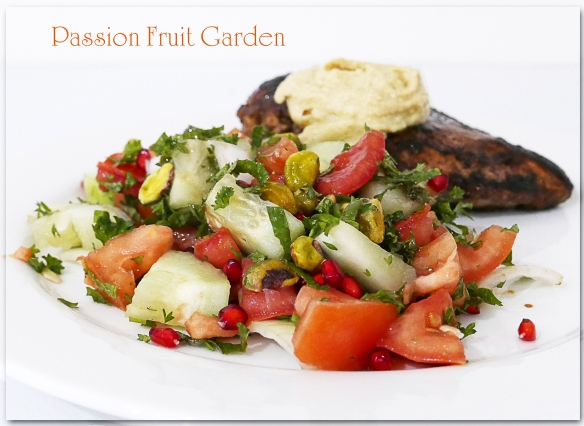 Today called for something simple as I had delegated cooking dinner to Maus.  I had three good reasons for this.  I was making tomato sauce and bread rolls AND I have a tooth ache. Well, I think it is a tooth ache.  The pain is radiating down the left side of my jaw so it is hard to blame one tooth in particular. The dentist reckons he has found some infection under a crown and prescribed huge amounts of antibiotics.  I don’t like taking antibiotics but am too frightened not to in case I end up with a full blown abscess under the crown.  Anyway, I was feeling sorry for myself and figured I had enough on my plate so dinner was Maus’ responsibility.

I asked Maus what she wanted and she said “chicken”.  I added cucumber to the wish list, because we have a few, and searched  Eat Your Books.  I came up with this recipe.  The only ingredients we didn’t have in the house or garden were the fresh chilli (I have so many in the freezer.  I didn’t grow any last summer) and the hummus.  It was too late to make hummus so we just bought some.

Since I am such a sweetie, I ended up making the salad for Maus.  Feel free to adjust the salad ingredients to the quantities that suit you – I did.

The recipe is by Valli Little and is from Delicious magazine, February 2009.

These quantities serve four.  We halved the recipe.

*These are 20 mil tablespoons.