Christmas time can be a bit weird.  Those of faith, I presume, can ignore all the commercial hype and concentrate on the original meaning of Christmas – the birth of Jesus Christ.  But for those of us without faith, it has come to mean a time to decorate a tree, play carols, be with family and friends, exchange gifts and be merry.  All of which sounds rather jolly.  To help us achieve this dream, and in the name of commercialism,  we are flooded with images of the ideal Christmas, an ideal, I am sure, most cannot achieve.

One of those images is the white Christmas.  Many, including me, hold on to an image of a cabin in a forest, with snow all around, and a wood fire burning.  This is one image that is never going to materialise in Western Australia where summer temperatures hover around 30°C and can soar to the mid 40s.  We are many times more likely to suffer a fire storm than to need a fire burning at the hearth.

We do have Melaleucas though, which, with a bit of imagination, look like snow on the tree tops.

We may not have snow but we have Christmas Trees in the West.  Nuytsia Floribunda is native to Western Australia and is commonly known as the Christmas Tree because it flowers at Christmas time.  When in full bloom, its flowers are so abundant the whole tree is a mass of golden orange.

It is a member of the mistletoe family which consists mostly of semi-parasitic shrubs growing on the branches of host trees.  The Christmas Tree, however, forms a tree with roots in the soil.

The tree can be found from the Murchchison River in the north to Israelite Bay on the south coast and extends inland up to 300 kilometres.

Here is a quote from one of my books on the Christmas Tree:

“Many attempts have been made by enthusiasts to grow this tree but there is little evidence to date that it can be cultivated successfully.”

Well, folks, the photo below is a cultivated flowering Christmas Tree and it is ours.  We bought three little babies about twenty years ago.  The first one died mysteriously after Maus did some spraying nearby.  Another went by the way at the hand of Maus and a brushcutter.  She was, consequently, banned from going anywhere near the last one which, coincidently, survived.  For years and years they do nothing and then, one year out of the blue, up shoots a trunk. This is exactly what ours did.  It is now about 6 metres tall. 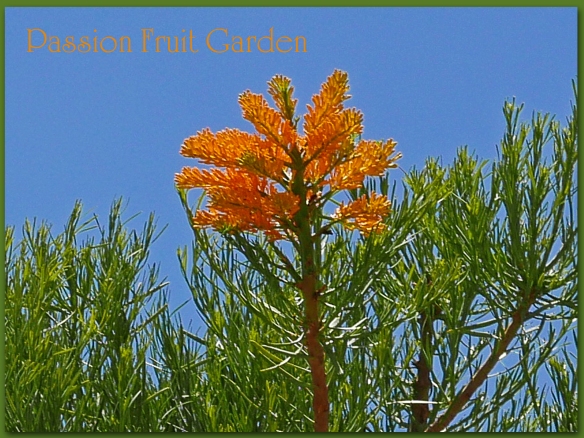 When I was a kid, the sight of a Christmas Tree in flower was a time for great excitement.  It meant Christmas would soon be here.  I remember going for a drive one year in mid December and mum (or dad, I can’t remember who) got me to try and spot the flowering Christmas Trees.  I presume this was to stop me whining about being bored but it was a game worth playing because if you could spot one, you knew, for sure, Christmas was on its way.

For years now, Maus and I have been watching our tree waiting for it to flower.  Each Christmas, we will it on.  But I didn’t even consider it this year, until today when I was checking sprinklers.  For some reason, I looked up and spotted this one flower.

And we have cherries. Cherries symbolise Christmas in Australia.  In WA, they appear on the shelves in mid December and are there for only a couple of weeks.

[Please ignore the imports that have been appearing in the supermarket in June or July.  Think of the food miles].

This year, we had a long winter and the cherries flourished.  So much so that our three trees produced cherries for only the second time in their 20 years.  This year, because water, as always, is scarce, Maus and I were walking around the block trying to decide which trees were worth irrigating.  We got to the cherry trees and could not believe our eyes.  One was laden and the other two had a moderate amount on them.  The first year we planted the trees, we reaped a small bowl and since then, nothing.  We decided to net one tree and give the other two to the birds. 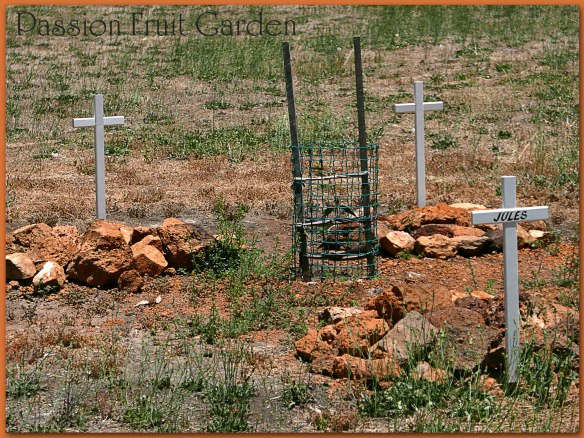 Our Bichon babies are buried on our block.  When our girls died so close together, Maus and I decided to plant a tree near their graves.  Little did we know that Jules would be following them so closely.

We wanted to grow a Sugar Gum (Eucalyptus Cladocalyx) because it is a huge tree (up to 35 metres) and we wanted a significant tree.  But we couldn’t get one.  With the size of blocks these days, there is not much demand for 35 metre trees.  We settled on a Salmon Gum (Eucalyptus Salmonophloia).  It only grows 20 metres but it has a lovely salmon pink trunk.  It is native to the wheatbelt and goldfields area of south west of Western Australia, however, most have been cleared for farming.

Anyway, we planted our little baby tree in winter with the thought that come spring, it would shoot.  Spring came and there was not a new shoot in sight.  It was still green so we continued to water it and talk to it (and Maggie and Lily and, later, Jules) but still there was no action.

Then, the other day, I went down with a bucket of water and found these lovely new shoots.  I have been teary ever since.  It is amazing how much joy a few new leaves can bring. 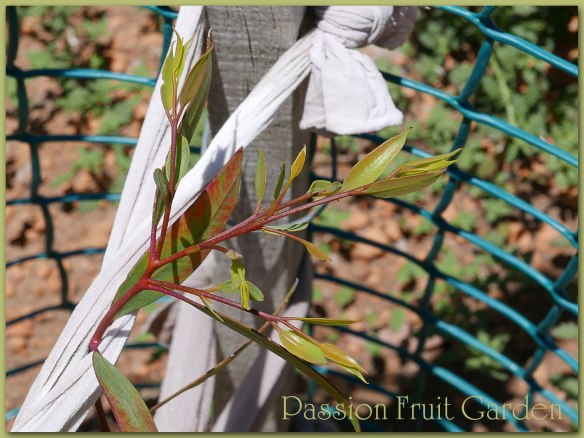 One last cheery story for you.  Meet Jacky I (there is also Jacky II and Jacky III).  When Maus’ dad, Jack, died we decided to plant a tree in his honour – it was a bare rooted Scarlet Oak.  Maus watered the bare stick over winter and for the first summer but, alas, it never shot.  It was clearly dead but I didn’t have the heart to tell her.  I told her they were deciduous and to keep watering it.  Next winter, I gently suggested we buy another oak (Jacky II) just in case Jacky I didn’t come good.

Next spring, Maus was weeding Jacky I and noticed a sucker growing from the base.  I cut off the dead trunk and Maus watered the sucker.

That little sucker is this huge tree today.

So do not worry if you didn’t have an ideal Christmas of turkey and Christmas pudding with friends or relatives.  Just look around you.  You are sure to find Christmas cheer.

16 thoughts on “Christmas is all around …”