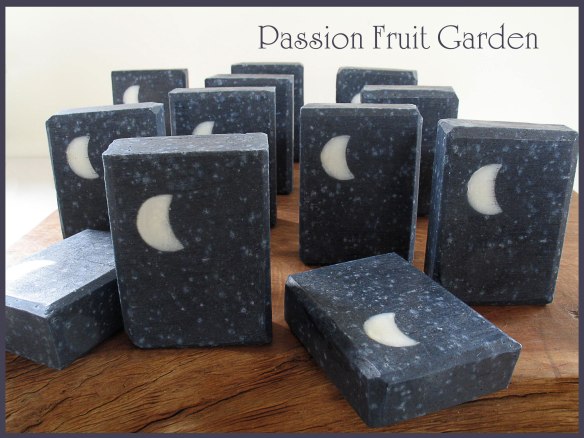 I hadn’t made soap for one month and I was beginning to have withdrawal symptoms so, a couple of days ago, I decided to remedy the situation.

I have had the idea for a Starry, Starry Night soap for ages (I actually made the moon a couple of months ago) but I was too busy making soap for the Easter stall and for my sister, to put my idea into practice. I thought it was a bit risky making it for the stall as I wasn’t sure how it would work out.  I had never used indigo powder or salt in soap before.

I am very happy with the result.  They turned out exactly as I had envisaged.

The soap is coloured with indigo powder, the fragrance is Brambleberry Ginger Patchouli and the “stars” are caused by the reaction of salt with the soap batter.

If anyone is interested in making these soaps this is what I did.

Firstly, make the moon.   I used a moon shaped embed mould from Aussie Soap Supplies.  You need to make the moon at least one day, preferably longer, before you make the rest of the soap. I didn’t use any colourants or fragrance in the moon.

The night before you want to make your soap, work out your recipe and quantities.  Add the indigo powder to the water.  Let it hydrate for a while then add the sodium hydroxide.  Let the combination sit overnight.

I bought my indigo powder from Aussie Soap Supplies.  I followed the quantities they used in a test soap, ie, they used 15g for 880g of oil.  Doing my sums, I worked out, as I had 1312 grams of oil, I needed 22.36g of indigo – which seemed like a massive amount but I persevered.  I got the exact colour I was looking for but, clearly, I used too much indigo, as the lather is coming out pale blue.  I think the difference is that in the test soap, they infused the indigo in oil whereas I added it to the lye solution.  Maybe, when you add it to the lye solution you extract more colour from the powder than when you infuse it in oil.  Oh, well, a little bit of blue lather is not going to hurt anyone.

The stars are made with salt.  I had 1863g of batter and I used 1.5 teaspoons of cooking salt, which I think is just right.  Add the salt just before you pour the soap and give it a stir.  I got the idea to make the stars this way from Aunty Clara’s Soap.

Pour about ¾ of the batter into a tall skinny mould, add the moon (get a helper to keep it upright if it wants to flop over), then pour in the rest of the batter.

We had a great day at the market on Easter Sunday.  It was a lot of fun but also a lot of work.  I had eight bar varieties, three cup cake varieties, loads of soap balls and some guest soaps left over from a Mother’s Day order from my sister.

The market started at 7:00am and went until midday.  There wasn’t much action until about 9:00am and then it was really busy for a couple of hours.  The reason why I chose Easter to have a stall was because there is a big tennis carnival in Bridgetown over Easter so there were a lot of extra people in town. 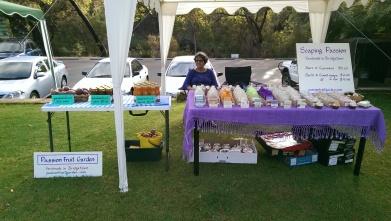 Here I am all set up and ready to sell my wares. 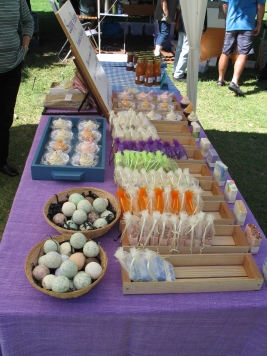 There is much less on the table mid morning

We sold several of each variety of soap bars and  cupcakes, loads of balls and all the guest soaps.  I was very pleased.

From one stall it was hard to work out what is popular and, therefore, what I should make again.  At Christmas, everyone wanted the cupcakes but at the stall, the bars were just as popular as the cupcakes.   And I was amazed how popular the balls were.

Because I love making the soap, I have put my name down for another stall.  This time at the Bridgetown Art and Craft Fair in July.  This one won’t be so much work as we are a little experienced now.