You guessed it, I have been at it again.  I really do like making soap but this time of the year, I do have a purpose.  It is nearly Christmas and everyone I know will be getting soap – sorry to spoil the surprise, folks 🙂  Also, I have been selling a small amount.  A Bridgetown friend has sold a few bars for me and I have sold some to friends and rellies.  It is a seasonal thing.  Soap makes great small Christmas gifts.

I am even thinking of setting up a stall at the local markets during holiday weekends like Easter and, maybe, I will get organised and have a stall leading up to next Christmas.  I have even come up with a name – Soaping Passion – what do you think?

Cupcake soaps are so popular, I just had to have a go at making some.  I knew I would eventually so, ages ago when I saw some silicon cupcake moulds, I bought them.  The soaps turned out rather well, even if I say so myself.

Ok … of course, there were a few problems but I blundered my way through them.

The base was coloured with brown oxide and the fragrance was Brambleberry Chocolate Italian Spice (which, by the way, smells divine).  The fragrance will discolour the soap brown but I wanted to ensure it was a nice chocolate brown so I added the oxide.  You would think the base would be easy, being plain, but I am fast learning that nothing is easy when it comes to soap making.  The bloody fragrance made the batter rice so it was a bit of a drama getting it into the moulds.

The icing was coloured with titanian dioxide and chrome green oxide and sea clay.  I was going for a green swirl but the batter was too thin when I mixed the green with the white and, in the flurry of getting the batter into the icing bag, the green and white virtually merged.

Normally, I have problems with the batter going too thick too quickly but, just because I needed it to be thick to pipe, this one did not move.  The fragrance was Brambleberry Spearmint Eucalyptus.  Because it did not accelerate trace, it would be a keeper but for the fact that after a day or two, you can barely smell it.

Given my total inability to pipe a decent meringue, I was very excited that these turned out as well as they did. They look real.

I have called these guys Christmas Cheer.  I wasn’t trying to make something Christmassy, I was just wanting a colour to go with the green balls and hit on pink.  When I cut them, it was Maus who commented that they look Christmassy.  I think she is right.  I  do like the ball look. 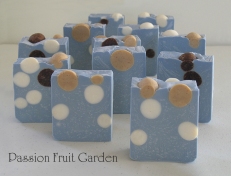 The soaps are much bigger than I planned.  I decided to make them the same size as these blue guys but misinterpreted my own calculations – I took what was the total batter weight as the oil weight so I ended up with much bigger soap.  Oh, well, all the more Christmas cheer.  🙂

The white is coloured with titanium dioxide and the pink is neon pigment – fired up fuschia and the fragrance is Brambleberry Cherry Blossom.  The fragrance did not cause any problems but is very light so I won’t be buying it again.

I think this should be the end of soaping for a while unless I get off my bum and do start that stall at the local markets, otherwise, soap will take over the whole house.