As you can see, I am back to making soap.  The temperature is rising and I have a rule: I won’t go outside when the temperature is above 30°C.  Well, that is my preferred option but, over summer, garden maintenance requires that rule be broken almost on a daily basis.  At least, as the temperature rises, the garden chores pull back somewhat.  This means I have more time to make soap! 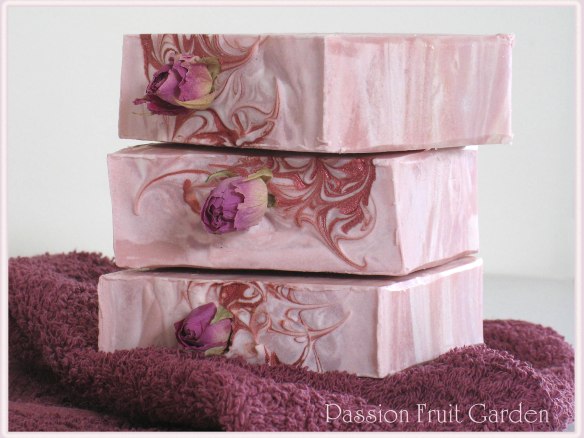 I have been dreaming of making a rose perfumed soap for ages.  I wanted the soap to be pink but I didn’t want clear pink.  I wanted a more old-fashioned rose look.  I am really happy with the result.  It is exactly what I had in mind.

I didn’t insulate the mould as floral fragrances have a tendency to heat up.  Lucky I didn’t!!  I was admiring my masterpiece for the umpteenth time when I noticed cracks forming.  Maus and I very quickly pulled the soap out of the mould and released it from its liner to let it cool down.  As it turned out, the crack was superficial and easily fixed.  All was well.

Flushed with success, I decided to try a similar soap but in a mint colour (with 5 variations) and fragrance.  For the fragrance, I chose Brambleberry’s spearmint eucalyptus fragrance oil which I ordered from the States.  My five colours were made from various combos of titanian dioxide, chrome green oxide, sea clay, ultramarine blue and neon pigment lime sherbet.  The pattern on top was created with white pearl mica and white, silver and green glitter.  I decided to pour the batter into the mould in thin steams to create a tiger stripe.  All went well until …  I had just poured the last of the batter into the mould when I realised I hadn’t added the fragrance oil!!!. Shit!

I made a quick executive decision that people would prefer a fragrant soap over a nicely striped soap and poured all the batter into a bowl and stirred in the fragrance oil.  Luckily for me, I was able to keep a slight swirl happening and the mixed colour ended up a nice minty green.  In the circumstances, I am very happy with the result.  Lesson for next time: DON’T FORGET THE FRAGRANCE OIL!!

26 thoughts on “A rose by any other name”