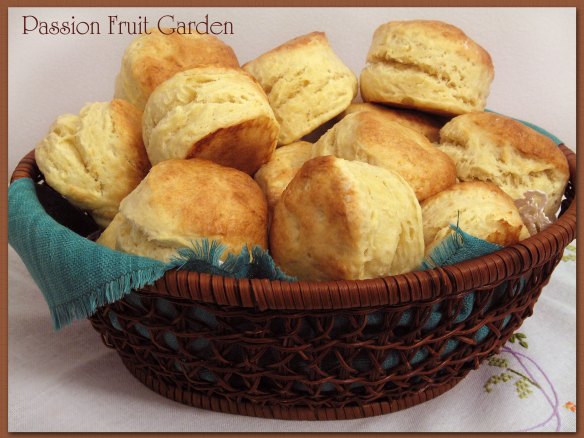 I know I said I was going to do one of these posts every month but I did forewarn that it may not happen due to a lack of discipline on my behalf.  As I mentioned, I am retired and thriving on the lack of discipline.  In any event, I decided there was no point writing a post about what we’ve been cooking when we haven’t been cooking much.

It is Spring and we are always busy outdoors in Spring.  As I mentioned last year, Spring is all about mowing, preparing for the fire season, renovating the vegie patch, fertilising the roses and the fruit trees, etc.  When the sun bears down in mid-Summer and I refuse to go outdoors, there may be more happening indoors, but not at the moment.

Because of the above, it has taken me two months to accumulate enough to warrant a post.

The first recipe I would like to re-acquaint you with is sourdough scones.  We have been so busy I have even neglected my starters.  The other night when I fed them, I decided to leave them out overnight and give them another feed in the morning to build up their strength.  That left me with quite a bit of sourdough starter to use or throw out.  I decided to combine them (the rye and the wheat) and build them up sufficiently to make some scones.  I assure you this batch was equally as fab as the ones in the picture.  Every time I make this recipe, the scones turn out perfectly.  Scones freeze really well so I like to have a batch in the freezer.

Carol, a reader who makes scones for a canteen, told me she made the recipe.  Instead of letting them sit for one hour, she put them in the fridge overnight and baked them the next day.  Carol also did a control bake.  She advised the refrigerated ones were just as good as the control bake.

Recipe two was our stand-by recipe over winter to use up my abundant snow pea crop – chicken with cashew nuts and snow peas .  At the beginning of the season, I searched my cook books for snow pea recipes and came upon this one.  We liked it so much we had it quite a few times.  Because of the success of the snow pea crop, I am going to grow more next season.  This recipe is definitely going to be a regular.

Recipe three is beetroot and chocolate muffins.  The incentive (of course) was the pile of beetroot I had in the fridge. The ones I made were even better than the one in the photograph.  Instead of sitting the chocolate on top, I stirred it in (which I think is better), and I used tall muffin wrappers – very elegant!.  Most of these also went into the freezer for a rainy day.

Having just picked the last of the beetroot, I think I will make another batch.  That way, I will have some in both Perth and Bridgetown.

A few weeks ago, Maus was desperate for biscuits and gingernuts are her absolute favourite.  As I was not forthcoming, she decided to take matters into her own hands and make some.  She did a fabulous job.  I love them as much as she does so they didn’t last long.  The secret to rock hard gingernuts, I have found, is to leave the biscuits in the oven after they are cooked.  That way, when they cool, they will be tooth-breaking hard, just as they should be.  This is a great recipe.  If you love gingernuts, give it a try.

Finally, there are still plenty of pumpkins under our house so, the other day when the cake tin was bare and time was short, I whizzed up my all-time favourite cake recipe – spicy pumpkin loaf.  I make this guy very regularly.

Happy cooking and baking everyone.