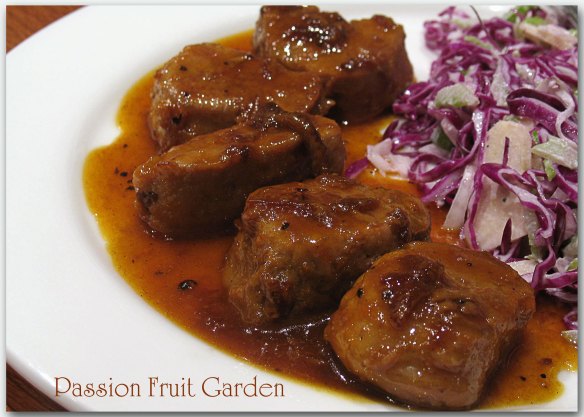 I needed some reading material the other day so I reached into my bookcase and, as luck would have it, picked up this great book my mate, Emily, gave me last Christmas.  It is “fifty recipes to stake your life on“, by Charles Campion.  It was first published in 2004.  I have no idea where Em found it.  I have never heard of Charles Campion but, as it turns out, he is an entertaining writer.  I have really enjoyed reading the book.  Each chapter is a long preamble, building up to a recipe.

The Chapter for this recipe is called Orange Tenderloin which, in Australia, equates to Orange pork fillet.  It is not a very exciting title but the recipe caught my interest for a few reasons.  Firstly, we used to have a neighbour, Regina, who worked in the office of a smallgoods company and would regularly give us pork fillets.  Because of this, for a while there, I was on the look out for ideas to use pork fillet.  We haven’t had pork fillet since Regina moved so I thought it would be a nice change.  Secondly, the ingredients included marmalade. I am down to the last jar of my mediocre 2003 mandarin marmalade. Of course, I was going to jump at another use for it. Thirdly, as the name suggests, oranges were required and I have just stripped the orange tree.  Therefore, I have quite a few buckets of oranges for which to find a use.  Fourthly, it sounded really, really simple.

The preamble to this recipe was about Charles Campion’s younger days when he was working in advertising in London.  Because he could cook, his ‘bachelor chums’ would seek inspiration from him when preparing a ‘quiet dinner for two’.   Main course was orange tenderloin because ‘it was really difficult to make inedible through incompetence.’  Sounds good to me.

Mr Campion suggested the dish would benefit from some ‘floury mashed potatoes to soak up the juice and a crisp green salad’.  I didn’t take up the advice because I thought coleslaw would work.  In retrospect, I think the advice was well given.  Rice would also work.