Is this lovely Hebron glass plate.

I was wiping this plate the other day and I said to Maus, “This is my most precious possession.”  Not in the monetary sense but in the sentimental sense.  My mum bought it for me in the early 70’s.  It was the first item in my glory box.  For those too young to know what a glory box is: it is a collection of household items gathered by young unmarried women in anticipation of married life.   I don’t know if one has a glory box these days, but you sure did in the 70’s.

I remember this plate being purchased.  I was with my mum in David Jones (an Australian department store) and I saw a stand with this glassware on it.  It was all in shades of pink and purple, my favourite colours then and today.  I could not believe how beautiful they were.  I  pulled mum over to show her.  I don’t think she concurred with my enthusiasm.  She was more of a china girl than a glass girl, but she did ask me which was my favourite.  I chose this plate.  She later went back and bought it for me.

I have only ever known that it was Israeli glass (originally, it had a Made in Israel sticker on it) but, because I decided to show case it today, I have been doing a bit of research.  I have found that it is actually Hebron Glass which takes its name from the city in which it was made.  Hebron is in the West Bank and glass is made by the local Palestinian families.  According to Wikipedia, the glass industry in Hebron was established during Roman rule in Palestine (63BC to 330 AD) and has been flourishing ever since.  Today, however, due to ongoing export problems, the decline in tourism, and restrictions on Palestinians freedom of movement, industry production has suffered.  Under these circumstances, the survival of the Hebron glass industry is in question.

This month has been a lot like Christmas.  My mate, Colette, and my sisters, Vickie and Juanita, have all been on holidays and returned with presents for me.

I mentioned in my previous post that Colette brought back a haul of gifts, including the single “Y” customisable cookie stamper, with which I have had fun. 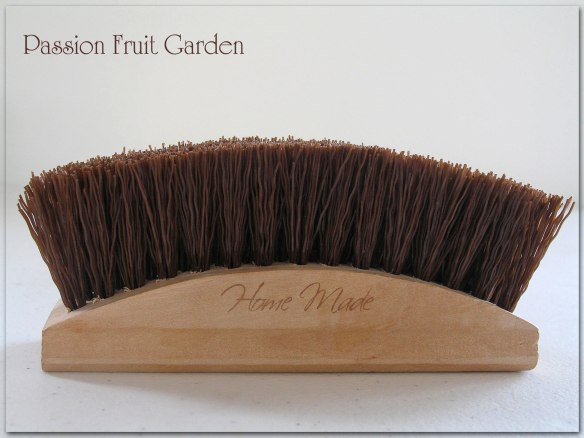 Is this wonderful brush that Colette also bought me.  I suspect you are looking at it and thinking,  “Why would a friend bring their mate back a scrubbing brush?”.  In fact, that is the very question Colette’s mum asked Colette.   But look again.  This brush is different.

This brush is a bread proving basket cleaning brush.  According to the label, it removes “residual flour and debris from basket grooves prior to washing.”  How cool is that?  I have a dishwashing brush kept, exclusively, for that purpose.  That can now be relegated to washing dishes.  “As far as I know, I am the only one in the blogosphere with such a brush,” she thought, smugly 😀

Are two ravioli cutters. When she was away, Colette was on a mission to find  kitchenware items I didn’t have.  A ravioli cutter was her only double up.  But it doesn’t matter because the one I already had is smaller than the one she bought.

I was just thinking…  I could also make square wafers or biscuits with these.  What a great idea.

Are some new tea towels, again, from the lovely Colette.

As you can see, the first one is all about the gorgeous Bichon.  None of the puppies on the tea towel is as pretty as Maggie, Lily or Jules but it is the thought that counts 🙂

This tea towel was designed to commemorate the work of Emmeline Pankhurst and the suffragette movement. The colour palette of green and purple was inspired by the original ‘VOTES FOR WOMEN’ handbills and posters and, as we all know, are international women’s colours. 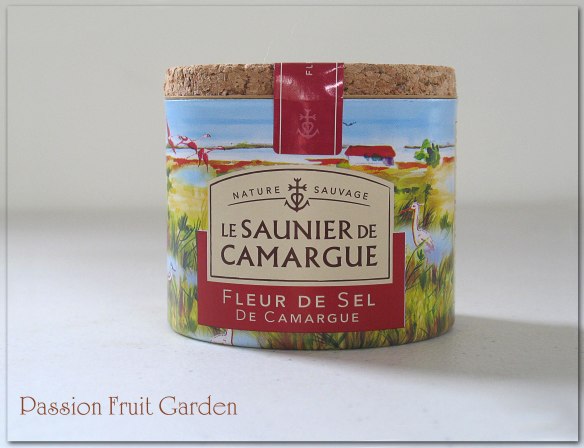 Is some Fleur de Sel de Camargue, again a gift from Colette.  Fleur de sel is the cluster of crystals that forms on the surface of seawater.  It is hand raked and harvested. Fleur de salt is the crème de la crème of salt.

Is some flor de sal which I bought in Aveiro, Portugal.  According to their website, the salt flower contains only minerals and nutrients, as well as microcrystals which facilitate digestion and has the advantage of being absolutely natural, not being subject to any manufacturing process, including washing, which removes very important nutritional components such as plankton and small debris skeletons of tiny marine animals, major sources of calcium, magnesium, zinc, copper, among others.

Are more gifts, but this time from Colette’s mum.  Colette mentioned that her mum had scored a box of Blackpool Rock on their latest trip.  I must have “oohed” a little too enthusiastically because the next time I saw Colette, she had extracted from her mum, three sticks for me.  (One didn’t last long enough to be photographed. Alas, now all have gone – Maus likes it as much as I do.)

When I was a kid, if anyone went to England, they would return with Blackpool Rock for everyone.  Whenever you eat the sweets you had as a child, they, invariably, disappoint.  I am glad to say that was not the case with this Rock.  This still tastes great.  The peppermint and aniseed flavours are very strong.  The only thing I noticed was it is not as has hard as I recall.  I don’t know whether this batch is a bit old or whether it is just me remembering it to be harder than it actually was.

Are two Koziol graters.  I have had the larger one for some years (a gift from my cousin when he came back from Europe) and the smaller one was a gift from my sister, Vickie.   I don’t use them as graters – they are too pretty.  They are great kitchen ornaments.

Koziol creates fun designs for the home. The company’s directive is to make desirable designs responsibly, which means they only use thermoplastics that are 100% recyclable with non-toxic pigments and any waste created during manufacturing is  recycled. 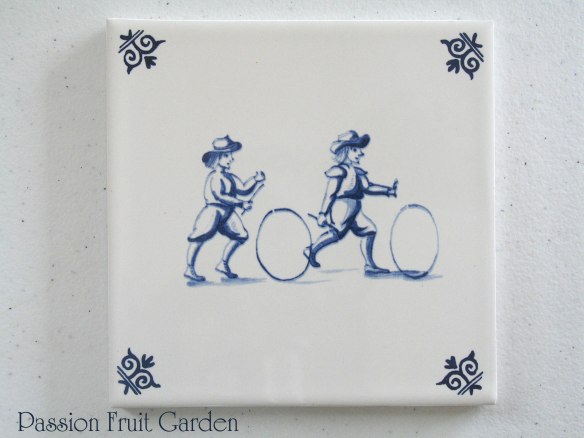 Is a Delfware tile, a lovely gift from my sister, Juanita.  It came with its own Certificate of Authenticity which I am sure contains lots of other interesting information but, alas, the tile is in Bridgetown and I am in Perth.  I do know, at least, that the tile is part of the “Work and Play” series.  I just love the simplicity of the design. If the tile can take heat (I am yet to check that out), I will get Maus to make me a wooden frame for it and use it as a trivet.  If not, it is destined to be an ornament. 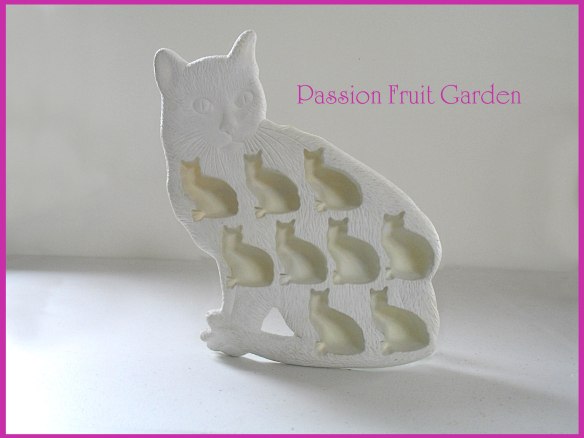 Is a pussy cat mould.  Have you seen these guys before?  If you follow other bloggers’ IMK series, you would have seen this mould on Mandy’s (from The Complete Cookbook) post.  I commented that I could make kitty soaps with her mould.  Before I knew it, Mandy had offered to post it to me.  In anyone’s language, that is very generous. Thanks, Mandy.  I intend to imbed some little pussy cats into bars of soap.  Stay tuned. 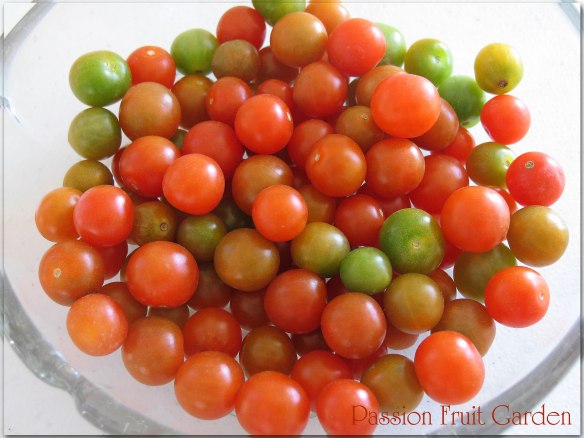 Are tomatoes 😀 Well, not any more.  I pulled out my pumpkin plants late last month.  In amongst the pumpkins was a tomato plant.  We didn’t get around to picking up the debris until a couple of weeks later.  When Maus was bagging the rubbish, she called out,  “Do you want the tomatoes?”  At first I thought she was joking but, no, in the couple of weeks the rubbish had been lying around, a number of tomatoes had ripened so we had fresh tomatoes as late as mid-July.

It is all about broccoli and snow peas at the moment.  I picked a huge bowl of snow peas and three broccoli heads today.

We were at the local tip the other day and I spied some kitchen items in the recycle shed.  You can take whatever you want from the recycling shed for a gold coin.  I zoomed in on this little beauty.

I laughed at myself when I turned it over and was pleased to note it was made in Japan. I thought, as such, it would be a cut above a similar item made in China.  In my mum’s day, if something was made in Japan, it would have been considered rubbish.  How times change.  I have checked this guy out and found a couple for sale in ebays around the world.  It appears I got a bargain with my gold coin jug. 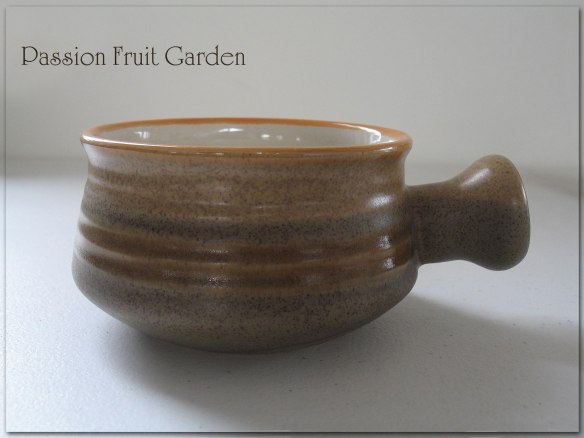 Is my new soup bowl/ramekin.  It is a find from the local op shop.  I have, previously, bought three very ugly op shop soup bowls/ramekins for photo shoots and have been surprised that we use them.  They are  just the right size for a bowl of soup at lunch time.  This guy is a cut above those bowls.  If I find another nice bowl like this one, I will throw the others out.  They have had their moment of glory in a post photo. This guy was made in Korea.  I don’t know how that ranks in the Japan, China, Korea, Taiwan stoneware heirarchy.  🙂