Not bad except for the shaping.

The above photo is my sixth attempt at Pane Accavallato di Altamura (overlapped bread from Altamura) and, I am glad to say, it is my best to date.  The worst thing about this loaf is the shaping and I blame Carol Field for that.  I blame her for a lot of other things but that will come later.

This month, The Cookbook Guru is showcasing the book, The Italian Baker, by Carol Field.  As I didn’t have the book, I put it on my birthday list and my sister, Vickie, bought it for me.  Thanks Vick.

The Italian Baker was first published in 1985, before artisan bread and home sourdough baking became popular.  It includes recipes for regional and rustic Italian breads which require a long, slow fermentation.  Most bread books, at the time, would have been using an excessive amount of dried yeast and proving their loaves ‘in a warm place’.  It was all about speed back then.  The inclusion of these traditional loaves would have been quite ‘out there’ for the times.  In that regard, the book can be lauded.  My version, however, is the 2011 revised version and a lot has changed in bread making since 1985 which is not reflected in the revised edition.

I opened the book and headed straight for the chapter entitled Regional and Rustic Breads.  Traditional Italian breads are made with a sourdough starter (in Italy, called a biga) and no commercial yeast.  Ms Field makes her biga with commercial yeast.  I am sure this was done to appease the American consumer but, for this sourdough baker, it is very disconcerting.

Not to be deterred, I flicked through the chapter and stopped at Pane di Altamura. I had attempted to make this loaf four times before (using Daniel Leader’s recipe)with little success.  I decided to give Ms Field’s recipe a go.

Pane Accavallato di Altamura is a 100% fine remilled semolina flour (Semola de grano duro rimacinata) bread which should have a dense, uniform crumb.  The crust should be hard and dusted with semolina flour. The loaf should have a fold on one side that opens up during the baking.  Here is a link to my previous efforts.  If you have the book, Local Breads by Daniel Leader, there is a good photo of what this bread should look like. I would love to show you but the photo would be copyrighted. 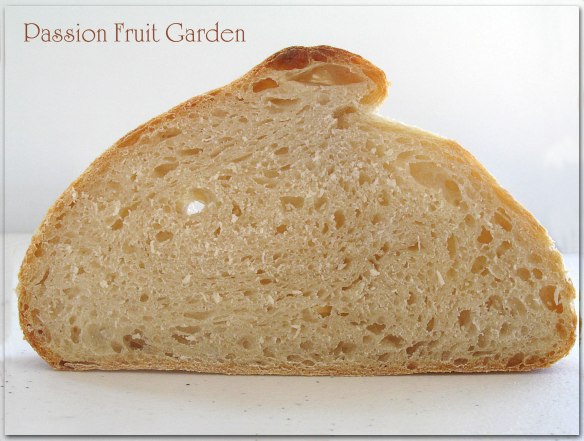 A slice from my 6th attempt

This is a slice of the loaf in the top photo.  It is pretty much what it should look like.  I am pretty chuffed with it.

My fifth attempt, following Ms Field’s recipe, was a shocker.  I followed Ms Field’s instructions exactly, including making the biga with commercial yeast.  My resultant dough was more like a runny pancake batter than bread dough.  Semolina flour does not absorb water at the same rate as normal bread flour so, at this stage, I was only a little concerned but sufficiently concerned to re-read the ingredient list. “Yep, all right there.”

I checked the ‘method’, again.  The first sentence had my alarm bells ringing: “Stir the yeast into 2 cups of warm water”.  This was more water than listed in the ingredients.   [It should have read “¼ cup (2oz/60g) warm water”]. She then goes on to say, “Add the remaining water” –  mmmm.  Further, nowhere in the instructions does it say to add the salt.  And then she makes the strangest comment,  “Don’t add extra water, although you will be temped, for this flour absorbs moisture slowly.”  This is downright wrong.  If flour absorbs water slowly, it will appear too wet and one will be tempted to add more flour not water. I understand books have mistakes in them but you’d think they would have been corrected in a revised edition.

What to do?  I decided to add a little more flour and then wait and see whether the dough absorbed more water whilst it was proving.

When it came to the first shaping, my bread was still like a pancake batter so I started throwing flour at it.  The recipe called for 500g of flour.  By the time I had finished, I didn’t have much change out of my one kilo bag.

The end product wasn’t too bad.  The main problem was the dough was so wet it could not be shaped.  Even with nearly double the flour, it was more like ciabatta dough than what pane di Altamura should be.

I still had another kilo of Semola de grano duro rimacinata so I decided to try again.  This time, I replaced the commercial yeast in the biga with sourdough starter.  I looked at Ms Field’s biga – it was pretty close to 100% hydration so that is what I made.

To work out how much water was necessary, I measured out 2 cups of water and slowly added water to the flour, salt  and starter until the dough was the consistency I thought appropriate.  I ended up using one cup of water, compared to 1¾ cups required by the recipe.

The most important lesson from this is:  when making bread, never add all the water a recipe calls for.  You may need less, you may need more.  Different flours absorb water differently.  Also, the age of the flour and the climate in which you are working will affect the absorption level of the flour.  The water amount can only, at best, be an estimate.

One last bug bear from this experience is the shaping of the dough.  I followed Carol Field’s instructions but I do not think they are right.  I much prefer the instructions given by Daniel Leader in Local Bread.  I set them out below.

This is what I did…

Mix together in a bowl:

Cover and leave at room temperature.

Mix together in a large bowl: