This month, the Cookbook Guru’s feature cookbook is The Food of Morocco, by Paula Wolfert.  Paula Wolfert is an acclaimed American cookbook author who specialises in Mediterranean cooking. 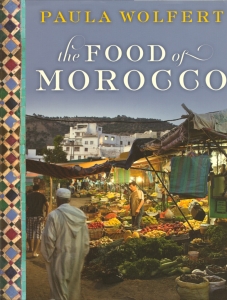 The Food of Morocco is her latest book.  It is an expanded version of her 1973 book, Couscous and Other Good Food from Morocco, a book which is still in print after 40 years.  If you have this book or can get it from your local library, why not join in?  Just make a recipe from the book, write a post and then send a link to the post to Leah, alias the Cookbook Guru.  Leah will then reblog your post on The Cookbook Guru site.

I was keen to post this recipe, asap, because I know many people currently have tomatoes galore and slow roasted tomatoes are the best way I know of preparing them.  Even if you don’t have a vegie patch, tomatoes are very cheap at the moment.  Roasted tomatoes freeze very well so it is a great way of preserving some for later in the season.

This is the third time I have made this recipe.  The reason is three-fold:  I have loads of tomatoes, they taste great but, most significantly, it took me 3 tries to get it right.

The recipe calls for the tomatoes to be slow roasted for 3 hours at 250°F (120°C).  The temperature is then turned up to 400°F (200°C)for 30 minutes.  On my first attempt, I put them in the oven for 3 hours and forgot about them.  When I finally checked, I had dried (not roasted) tomatoes.  The next time, I roasted them for 2 hours then turned up the oven for an additional 30 minutes.  They were fine, but a little too charred for my liking (see picture on the left).  I eventually settled on 2 hours at 120°C (top photo).  If you prefer your tomatoes a little dryer, or a little more charred, by all means adjust the cooking time.

The recipe calls for 6 Roma tomatoes but each time I used many more than that and had sufficient topping.  I guess it depends on how heavy a ‘sprinkler’ you are.

*These are 15 mil tablespoons

** To toast the pine nuts or sesame seeds: put them in a dry pan and heat until lightly golden, stirring all the while.

21 thoughts on “Roasted tomatoes with rosewater”