I have been making soap again and, slowly, I am getting better at it.  After my disaster with Bramble Berry lilac fragrance oil, I have decided to only make very small batches until I really know what I am doing.  That way, if my plan goes astray, I only have a small batch of wayward soap to use.

The recipe I have been using makes enough for the small mould Maus made me when I first started out.

The internal dimensions are 9.5cm wide, 15.5cm long and 6cm high. You get five or six cakes of soap, depending on how thickly you cut them.  That is enough if the soap is such that it should not be seen in public.

The recipe is from Basic Soap Making by Elizabeth Letcavage.

My plan was to divide the batter into two and add 2½ teaspoons of Bramble Berry sandalwood  fragrance oil (which is a wonderful fragrance, it behaves exceptionally well in cold processed soap – no acceleration and no discolouration) to each half and 1 teaspoon of rhassoul clay (to act as a colourant) to one half.  I then planned to swirl the two halves.

I read that it is best to add the rhassoul clay to water and mix it before adding it to the batter so I set aside 2 x 15 mil tablespoons of water from the measured water and mixed the rhassoul clay into it.  Then I realised the error of my ways.  By doing this, one half would have more water than it should and the other half, less – damn it.

So I quickly decided to colour all the batter with the rhassoul clay.  I then divided the batter and added one teaspoon of my titanium dioxide mixture* into one half to whiten it.  I still wanted a distinction in colour.  This worked a treat.  I added the fragrance oil to each half.

To get the swirling effect, I poured the coloured batter into the light batter in 4 entry points then used a chop stick to swirl the batter through the entry points.

As I was pouring the soap, I realised the colour was the same shade as some sage powder I had previously made up so I sprinkled a little on top.  All in all, I am pretty happy with how it turned out. 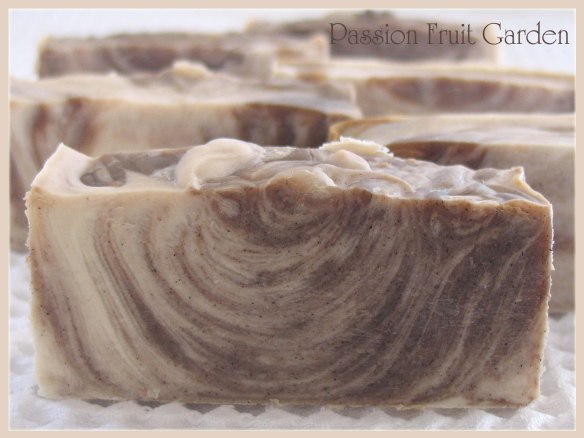 I am very happy how this batch turned out and, this time, it is because it turned out just as I planned.  This doesn’t happen that often.  I am particularly happy with the swirls.   I made this batch just not long after the other batch to try and learn from my mistakes.

I used the same recipe as above but, this time, when I divided the batter, I added:

To the other half:

I added the cinnamon because Arabian spice fragrance oil discolours soap to a medium brown and I wanted a nice chocolate brown.  I love the colour.

The swirl was great, the colour was great but, best of all, the fragrance was to die for.    The mixture of Arabian spice and sandalwood is just divine.

I am having so much fun.