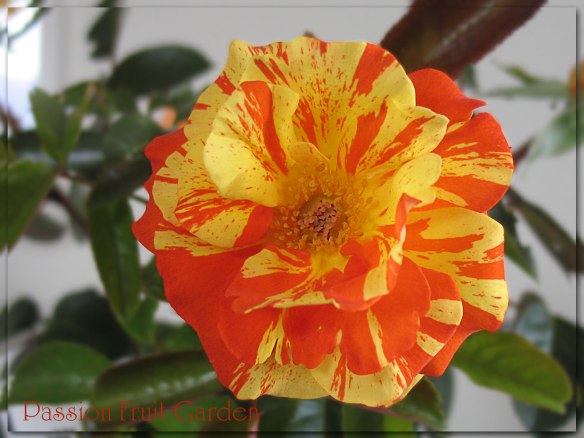 I have started this post three times and each time it has been titled something different.  The first version was Orange Silk (which is what this rose is labelled in my garden) but Orange Silk is not a variegated rose and this rose most certainly is.

Something was clearly wrong.  I started looking further afield and came across a flower that looked exactly like mine – Oranges and Lemons.  I rechecked my catalogue and found the nursery stocked Oranges and Lemons the year I bought my rose.  Oranges and Lemons would have been stored alongside Orange Silk  so I concluded that someone had accidently picked up the wrong plant when filling my order.

“You can hold this rose to rose-bed size by severe discipline at pruning time, but it’s really better to think of it as a Shrub Rose and give it its head.  Lightly pruned it makes quite a graceful shrub, head-high and about the same in width and well clothed with attractive foliage.”

Everything I read about Oranges and Lemons matched my plant except the growth habit.  My plant is not head-high – it is barely 50 centimetres tall.  I read on:

“Don’t confuse this rose with ‘Pandemonium’, under which name it was mistakenly sold by some Australian nurseries a few years ago.  The real ‘Pandemonium’ is an orange and yellow-striped miniature.”

My plant (Pandemonium, I think)  is a small shrub, 50 – 60cm tall, with an arching growth habit.  Clusters of flowers form on the end of arching canes.  The foliage is small and mid-glossy green.  The new growth is burgundy.

The blooms are yellow and oranged striped.  They are double with 26-40 petals and have a light fragrance.

The colour stability of the blooms is excellent, even in mid-summer.   I checked out my bush on a very hot day and the blooms were perfect.  There was no burning or fading.   Pandemonium is reported to always produce true orange and yellow blooms, unlike Oranges & Lemons which produces pink/white blooms when it’s hot.

Pandemonium was bred by McGredy, New Zealand, and released in 1988.

10 thoughts on “Pandemonium – in more ways than one”