Bread baking is so much fun, I just wish everyone would do it.  I know it seems a little tricky to the uninitiated but it needn’t be.  The hardest part is getting the dough into the blazing hot oven.  This usually requires either:

The Römertopf baker simplifies all that.  Like all Römertopf products, it and the dough are put into a cold oven.

It certainly is much simpler and, in summer, much less heat is produced in the kitchen.  Because of that, I wanted to give it a go and willed it to work.

This is my third loaf.  No matter what I do, I can’t get a good looking loaf using this technique but the bread tastes absolutely fine, the crumb is nice and open and the crust light and crisp.  In the circumstances, I am willing to forgo good looks. 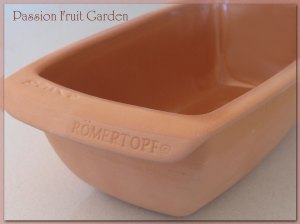 For some reason, the loaf seems to rise from its midriff so you get a big open crack around the circumference of the loaf rather than on top.  I did slash my second loaf but it still rose in the same manner so this time I didn’t bother.

The round baker takes 1kg of dough and the loaf pan takes 750g of dough.  Peter’s of Kensington sells both bakers for $28 each.

You can use any bread recipe, sourdough or commercial yeast.  Just do the sums and convert your recipe into either 1kg or 750 grams (depending on which Römertopf you have).

Line the Römertopf with baking paper.  I just pushed a sheet into the bowl and then nipped it so that it would sit flatly in the bowl.  I did try greasing the pan but the bread stuck.  Baking paper works perfectly.

Make your dough as you usually would but put the dough in the lined bowl for its last rise.   Cover with some Glad Wrap that has been sprayed with water and oil to stop the dough forming a crust and the wrap sticking to the dough.  About half an hour before you want to bake, put the bowl (dough and all) into a sink of luke warm water.  I found that the bowl floated in the water.  When it is time to bake, put the wet bowl in the oven.  For the 1kg loaf :  turn your oven onto 200°C for 45 minutes.  After 45 minutes, take the bowl out of the oven (remembering to rest the bowl on a towel so you don’t break it) and take the loaf out of the bowl.  Put the bread back in the oven, upside down (to brown its bum), turn the oven down to 175°C and bake it for another 30 minutes.  The 750g loaf would probably take about 15 minutes less but I haven’t tried it.

Ok, it is not pretty but it is very easy and there is no need to slide your loaf onto hot tiles or handle a hot cast iron pot.

16 thoughts on “Baking bread in my Römertopf baker”