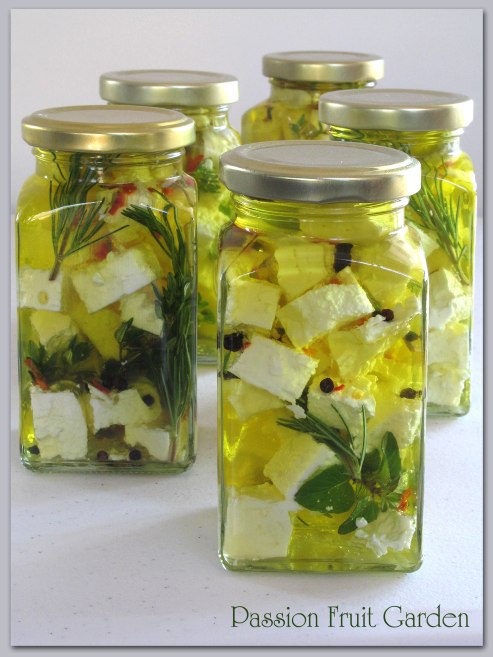 Is some preserved Dodoni feta (my favourite) which is the result of a strange text I received from my mate, Colette, who was coming to visit.  It read, “Can I bring some feta?”   Weird, I thought, but to which I replied, “If you wish.”  It turns out Colette got a bit carried away at Kakulas Sisters and bought too much cheese.  What was I to do with an over-abundance of feta?  Certainly not waste it.  I love the colours. 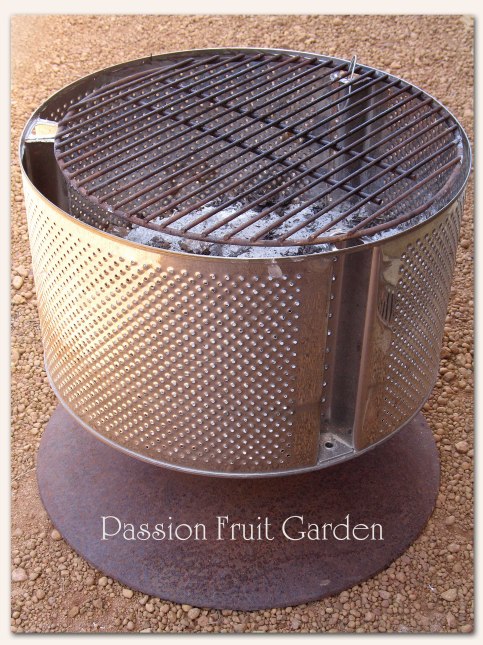 Well, outside my kitchen, is our new barbecue.  Its a beauty and it cost $0.00, nix, zilch, zero, nil.  Remember the story of Maus pulling our old washing machine apart and presenting me with a new heat-resistant bowl (pictured below)?  That was April 2013.  Well, we recently did a big clean up in Perth.  We hired a skip bin and nothing was safe.  I had a ball.  I was throwing away things that were going to come in handy one day with gay abandon. 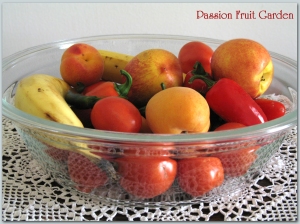 At one stage in the process, Maus appeared with the washing machine tub.  “I guess you are going to make me throw this out.  I was going to make a barbecue out of it,”  she said in the saddest voice she could muster.  “Ok”, I replied.  “It can stay.”  Maus could not believe her ears.  The washing machine tub got to live another day.  The base is a plough disk, that Trevor, Maus’ brother, offered her and the grill is from Andrew, Maus’ nephew.  I think he picked it up from the side of the road. 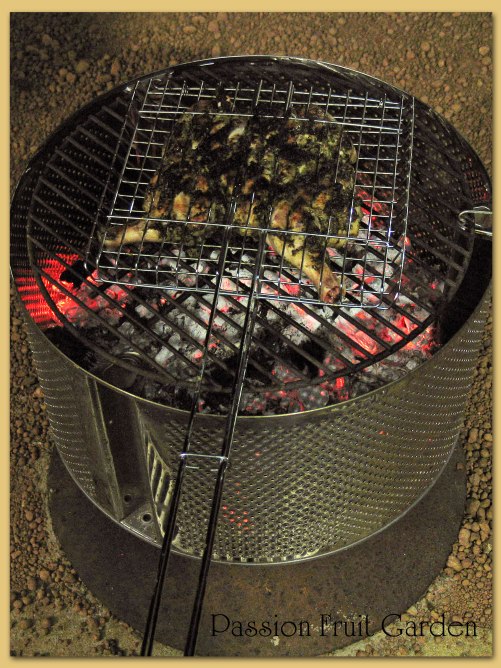 Here is our barbecue in action.  It works really well.  The grill fitted perfectly.  On the barbecue is a chicken (here is the recipe, if you are interested) and in the photo below is a boerewors.  Andrew, the above mentioned nephew, sent us to a shop specialising in African products (Cape to Cairo) to buy some really good charcoal and Maus saw it so we decided to give it a go.  It was very nice.

We are definitely beginners with solid fuel barbecuing.  It took us ages to get the charcoal alight but I am hooked.  I love it. The best part is you can cook a marinated chicken and not spend half an hour the next day cleaning the barbecue.

(Excuse the colour of the photos – they were taken in the dark.) 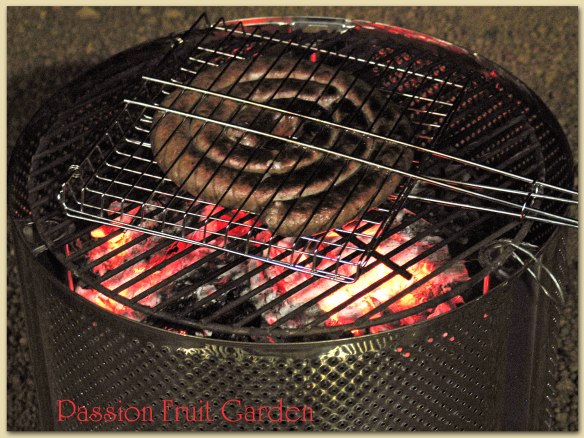 Is my mum’s apple corer.   It has a wooden handle and the stainless steel blade has been bound to it by string.  If my mum was alive today, she would be 95 so it would be a few years old.  It is still in perfect condition.  It was made in England by Tala.  I looked them up and was amazed to see they are still making kitchenware.  The company was formed in 1899.

This photo is also about Maus.  This was the final photo taken for this post and, at the last moment, I decided the photo would look better with an apple in it.  I asked Maus to whizz down to the shop to get an apple.  “What type?” she asked.  “The most photogenic,” I replied.  Look at the beauties she came home with.  She couldn’t decide which was the nicest so bought all three. 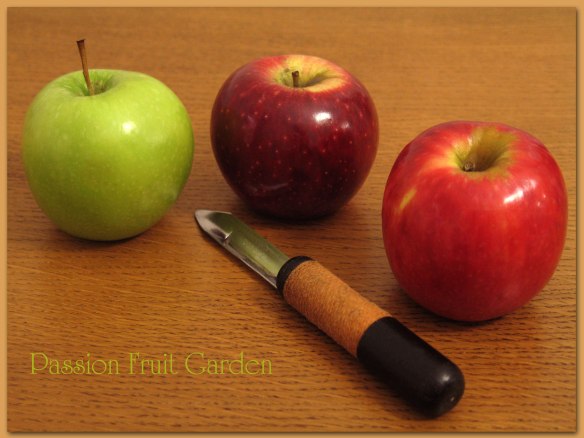 Is a leg of lamb.  Not just any leg of lamb but a leg of lamb cooked in my Römertopf.  I must say that I agree with Celia: the Römertopf is a marvel.  I have cooked several legs of lamb in it and they have all been fantastic: lovely and moist.  As Celia has mentioned, the best bit is that the oven stays clean and the Römertopf is a cynch to wash.  The timing is very simple, too – one hour for each kilo and remove the lid for the last half an hour.  The marinate for this leg was the spicy marinade from Saha by Greg and Lucy Malouf which was last month’s feature cookbook.  I had planned to do a post on it but I ran out of time.

Getting this photo was a bit of an ordeal.  Neither Maus nor I have any idea about carving the lamb.  I made an executive decision and allocated the job to Maus.  Our mates, Steve and Alan, were waiting patiently on the side line for their dinner.  Maus (being the sweetie she is) turned the lamb over to make a nice slice for the photo and all the crust fell off.  She was severely reprimanded so she patted it back on again. 🙂  The things we do for a photo. 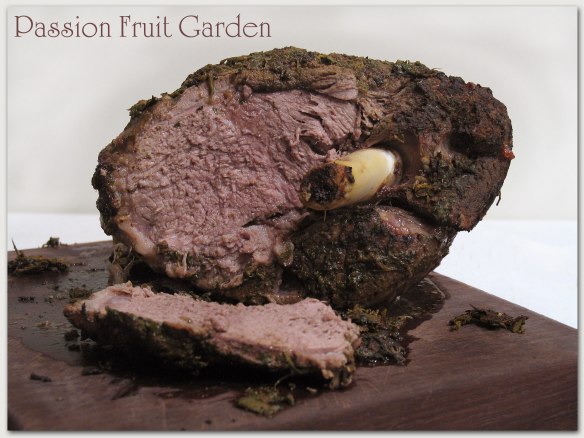 Is a not very handsome loaf of bread but my first attempt at cooking sourdough starting with a cold oven.  It was also cooked in the Römertopf .  I think I sprayed too much water around.  I probably didn’t need any as the Römertopf is soaked in water but I am so used to spraying like mad.  Also, for some reason, I couldn’t work out when to put it in the oven.  The bread tastes fine, even if it is not the most handsome.  I will try it again before I decide I don’t like the technique. 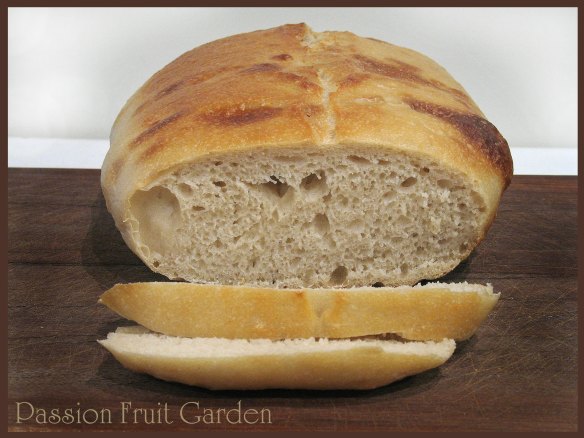 Is a very colourful Joseph Joseph plate.  Maus, the critical one, told me to add some colour into the post and this is the most colourful item I have in my kitchen.  Its a wonderful plate, ideal for cakes because it is totally flat. 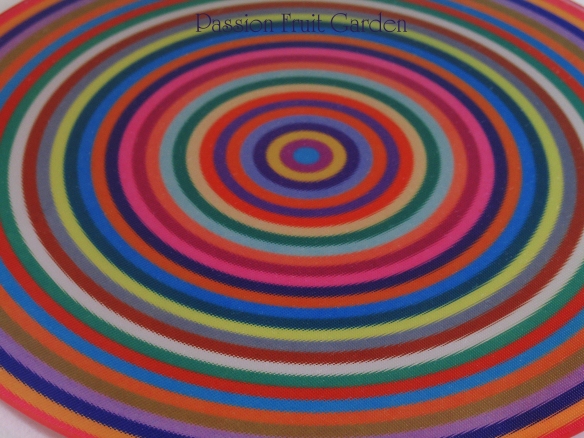 Is a gift from Colette.  She assured me it is not very nice.  She bought two and didn’t like it so she gave me the second one.  Colette’s assessment is that it is dry and grainy but ok in hot chocolate.  I am not sure what to do with it and whether it is supposed to be eaten like chocolate.  Does anyone know? 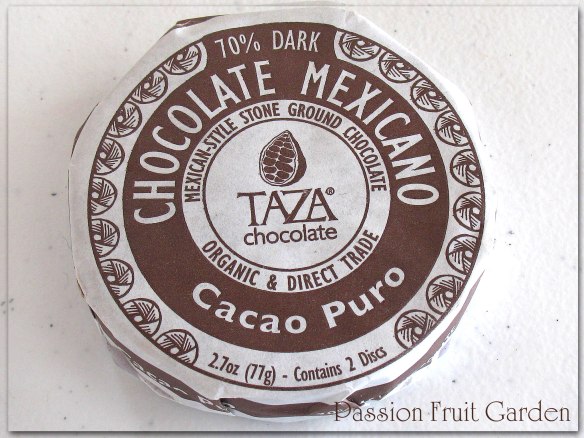 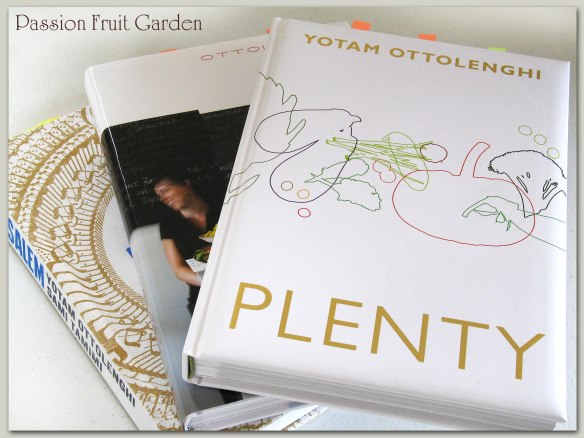 Is this gorgeous Huon Pine bowl, a gift from an old friend, Jann.   It was made by Russel Mercer.  Huon Pine is a very prized wood but very rare.  Most of the surviving trees are in World Heritage Areas.  As a consequence, the only wood that is used for crafting is from dead trees.  This piece, if I remember correctly, was from a log found in a river.  Here are a few interesting snippits I found on Wikipedia.

Lagarostrobos franklinii is a species of conifer native to the wet southwestern corner of Tasmania, Australia; it is the sole species in Lagarostrobos.

Lagarostrobos franklinii is often known as the Huon pine, although it is actually a podocarp (Podocarpaceae) not a true pine (Pinaceae).

It is a slow growing, but long-lived tree; some living specimens of this tree are in excess of 2000 years in age.

A stand of trees reputed to be in excess of 10,500 years in age was recently found in Western Tasmania on Mount Read. Each of the trees in this stand is a genetically identical male that has reproduced vegetatively. Although no single tree in this stand is of that age, the stand itself as a single organism has existed that long.

The wood is highly prized for its golden yellow colour, fine grain and natural oils that resisted rotting. The chemical that gives the timber its unique smell and preservative qualities is methyl eugenol.

There you go.  Wasn’t that interesting?

Are some goodies Maus’ nephew, Andrew, and niece, Shamila, brought us back from their recent visit to the Adelaide Central Markets.  The goodies, Tuscan Orchard Dukkah and Muscatel grape steeped in fortified wine are two products from Assaggio Gourmet Store, Adelaide Central Market, which is a spin-off from the Assaggio Ristorante and Assaggio Café.  We haven’t tried them yet but are sure to very soon. 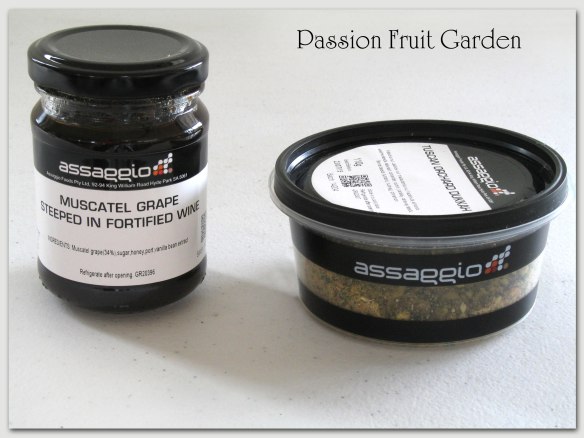