This is another post from The Cookbook Guru’s  feature cookbook for this month, Saha, by Greg and Lucy Malouf.

As the name of this recipe indicates, it should be cooked on coals, ie, a solid fuel barbecue or an open fire.  Greg and Lucy suggest a Weber would be ideal.  They also suggest a ridged griddle pan would work (or the grill on a gas barbeque), but who would want to clean the marinade off a griddle pan after a nice dinner?

Greg and Lucy also recommended a grill basket to keep the chicken flat (and I also suggest, in one piece) so we bought one from Barbecues Galore.  It was a god send.  One flick of the wrist and the chicken was turned.

We have never cooked on coals so we really didn’t know what we were doing.   I had to make an emergency call to Maus’ nephew to find out how to light the charcoal and for a few solid fuel barbecuing tips.

Maus and I have had great plans to make a solid fuel barbecue (more on that later) so we brought forward our plans just for this recipe.  Our barbecue worked, but we think the grill is too far away from the coals.  This poor chicken took forever to cook – it was more a slow bake than a char grill.  We started out sitting by our little barbecue with beer and nuts but it soon got too cold for Maus so she went inside and left me watching the baby.  A significant amount of time later, it got too cold for me too, so our little chicken was left all alone to cook by itself.

In the end the chicken was lovely but probably would have been better with more of a char grilled taste.  We are going to lift the fire and try it, again, tonight. 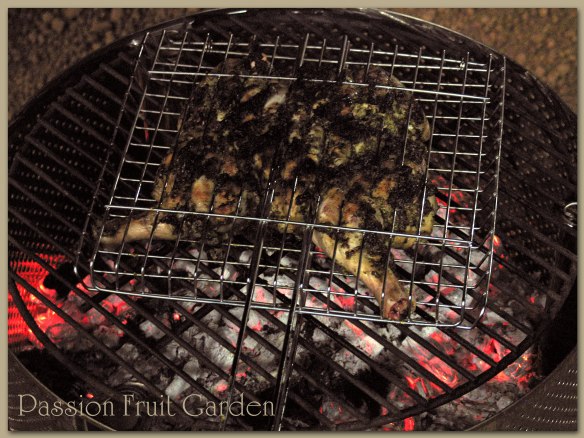 *  I didn’t bother chopping these ingredients.  I put everything into my Vitamix and blended it on very low.  It worked perfectly.  Everything was blended but there was still texture in the marinade.  As everything is supposed to be finely chopped, I assumed that was what was called for.