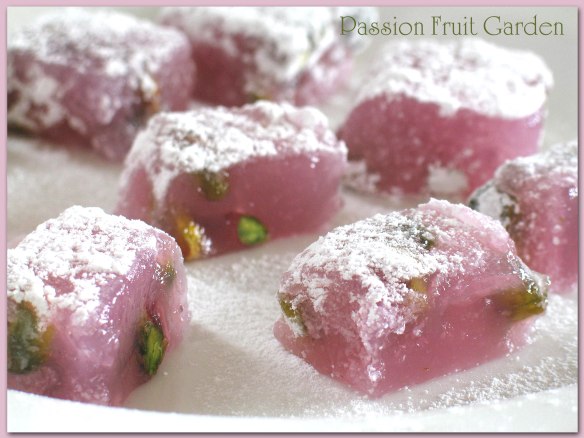 Sorry, there haven’t been many posts of late.  With Spring comes fertilising, weeding, raking, burning off, regenerating the vegie patch, brushcutting and mowing, mowing and more mowing.  With two properties (one being seven acres), we are two busy bees this time of year.  We usually come in late and tired.  And I am not thinking, ‘What new concoction can I make?’; rather, ‘What is the quickest thing I can make?’  But the other night I thought, ‘Damn dinner, I am going to make Turkish Delight.’

This is my first attempt at Turkish Delight.  Alas, it was not a great success.  It looked good (at first) and it tastes good but it is not firm enough.  After this photo was taken, it sweated so much that all the icing sugar/cornflour coating melted and it became a sticky mess.  What a pity – I had high hopes for it.  It is currently in the dehydrator being saved, I hope.

I have wanted to make Turkish Delight for ages.  Maus loves the stuff and I am also a little partial to it.  I was going to make Claudia Roden’s recipe but, as is the case most of the time, the recipe I wanted was in Perth and I am in Bridgetown.  Because my first choice was not available, I decided on the recipe from Peter Greweling’s Chocolates and Confections which is a great book.  I have had success with everything else I have made from this book so I felt confident his recipe would be a good one.  The recipe is supposed to be easy, but I don’t know… The only change I made was to replace 2 tsp of rose water with 2 x 15 mil tablespoons.  I just love rose water and 2 tsp did not seem much.  Otherwise, I followed it to a ‘T’ and still it did not work.

It appears that I am not the only one who has had trouble with the recipe.  I found a forum where some poor bloke had the same problem.  That is where I got the idea of trying to save it by putting it in the dehydrator.  Some one suggested he do that.  Another suggestion was to coat it in chocolate.  It appears the chocolate holds it all together.  I may try that when I take it out of the dehydrator.

There are a multitude of Turkish Delight recipes out there and they are all different.  There are recipes with cornflour and no gelatine, recipes with both and recipes with just gelatine.  Now that I have read into it a bit, I have ascertained that the traditional method had no gelatine in it.  Gelatine, it appears, is the cheats way 🙂  Essentially, it is to speed up the process and make it set.

From what I can gather, I did not cook mine long enough, notwithstanding I cooked it for 25 minutes and the recipe says 20-25 minutes.  Since this attempt, I have noticed other recipes without gelatine usually require the mixture to be cooked much more than 25 minutes.  One recipe on YouTube says to cook it for one hour and Claudia Roden requires it to be cooked 3 hours.  What hope did mine have?

I will give you the recipe just in case you are brave enough to try it.  If I try it again, I would use less nuts.  They are a bit overwhelming.  I think the decision to use more rose water was a good one.  Another tip I found in the forum was from a fellow who had Peter Greweling’s professional book.  In that book, Peter says to cook the concoction until it reaches 223°F (106°C).  He said he was going to try that next time.  I might, too.  He also said he would use more rose water and fewer nuts.

If anyone tries the recipe, please, let me know how you go.  I need all the tips I can get.

This is not the last you will hear of Turkish Delight from me.  I am going to nail this one.  More recipes to follow…

Please, note:  As this book is American, measures were, originally, in pounds and ounces. 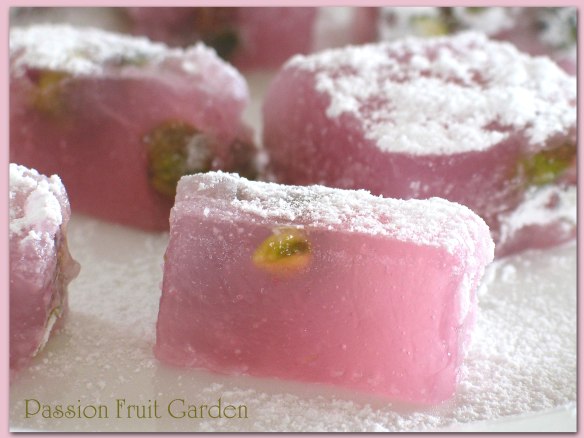