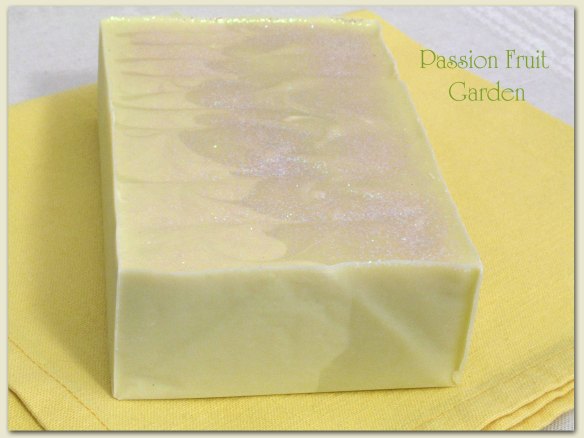 Here are a couple of photos of my parsley leaf-infused olive oil soap.  I am really happy with the colour and … dig the glitter … I am getting fancy now.

The first photo was taken on 10th June, the day after I made the soap and the bottom photo was taken about two weeks ago.  The colour has not changed in the last two weeks.  Tania, from The Cook’s Pyjamas, has informed me that my soap will discolour but there has been no discolouration thusfar.  The dark half of the soap was coloured with the parsley leaf-infused olive oil.  The light half had, in addition to the infused oil, one teaspoon of my titanium dioxide mixture* added to it.

To make the parsley leaf-infused oil, I put 20 mils of parsley leaf powder in a ‘tea bag’ and then put the tea bag in a jar with 150g of olive oil.  I secured the lid, put the jar on a trivet in a pot, poured very hot water into the pot and then put the pot at the back of the stove for about 12 hours.  I am lucky I have a wood stove that is on all the time.  Another idea would be to put the jar in a slow cooker filled with water and put the slow cooker on “low” overnight.

To make the soap, I made up half quantity of Anne Watson’s Shea Butter Supreme.  The recipe is from Anne’s book, Smart Soapmaking.

I made the soap in the same manner as I have made all my soaps.  Here are the instructions.

At trace, I divided the batter roughly one third /two thirds.  Into the one third, I added one teaspoon of titanium dioxide mixture and 2 teaspoons of Bramble Berry black tea fragrance.  Into the larger batch, I added 3 teaspoons of Bramble Berry black tea fragrance.  Maus and I each poured each portion of the batter into the mould at the same time. Using a skewer, I swirled the batter around a bit.  I then sprinkled cosmetic grade glitter on the top.  The next day, I gave the top a burst of hair spray.  It is supposed to assist in securing the glitter.

I think I am getting better at this.