Soap making is so much fun – nearly as much fun as making bread, but not quite.  As I have said before, there is no greater delight than sitting on the floor in front of your oven with a glass of red wine, watching your bread rise.

But we are talking about soap today.  When you start out, you think it is going to be a cheap hobby… but then you want colours and perfumes and, oh, some glitter would be nice, as would some different shaped moulds and a cutter and…  Luckily, Aussie Soap Supplies is not too far away.

My first batch was neither scented nor coloured.  It was a creamy, yellow soap.  I then decided I wanted to add fragrances.  I quickly learned I love all the fragrances containing vanilla and vanilla turns your soap brown.  As a result, I made several batches of brown soap.  I then got the urge for white soap and then thought some white soap with swirls would be nice.

A quick search of the internet and I learned that titanium dioxide, added to your soap at trace, will make it white. You make up a concoction of one teaspoon titanium dioxide to about 70 mils of a carrier oil, like olive oil.  This is mixed with a mini mixer or milk frother.  You add one teaspoon of this concoction to your batch at trace.  Just remember, next time you want to use it, give it another whizz with your mini mixer.  It really does lighten your soap.  I am very happy with the white of this batch.

Next, I decided to pour the different colours through a funnel.  Maus made me this wonderful contraption to control the pour.

I am pretty happy with this batch.  I got some interesting effects, although they could have been much better. As you can see from the photos, I didn’t get any distinction between the two Brazilian clay batches.  Next time I use clay, I will use two different colours for the batches, with one teaspoon in each batch.

The fragrance I used was Bramble Berry Eden’s Garden.  I chose it because it doesn’t discolour the soap.  Eden’s Garden, however, accelerates trace (makes your soap set faster).  Luckily, I read this before I started and Maus helped me with the pouring.  As you can see from the photo below, the last drops were pretty thick, but I quite liked the effect so I didn’t bother smoothing it.

Here is the recipe I used, if anyone is interested.  It is from Anne Watson’s book, Smart Soapmaking.

At trace – divide the dough into three 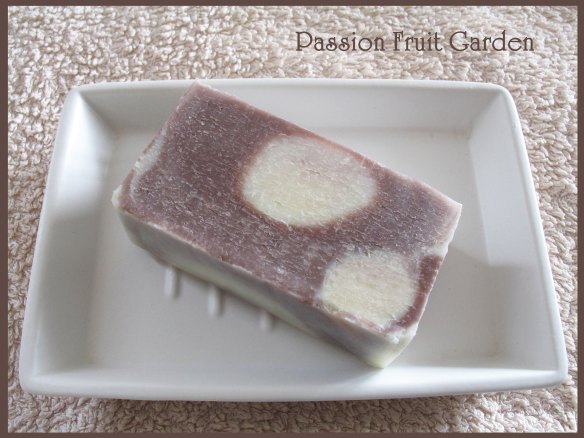 Another little experiment, just for fun.

About three months ago, I made a half batch of the above recipe to see the effect Bramble Berry Chocolate, Italian Spice fragrance would make.  I added 20 mils of the fragrance.  The soap started out cream in colour.  This is what it looked like a few days later.

This is what it looks like now.  This soap has no colourant in it.  It is just the discolouration from the fragrance.  See what I mean?  I am in for a lot of brown soap.  The white stuff on the top of the soap is soda ash.  It is fine but not that pretty. I have bought some isopropyl rubbing alcohol to spray on my next batch.  It is supposed to decrease soda ash formation.