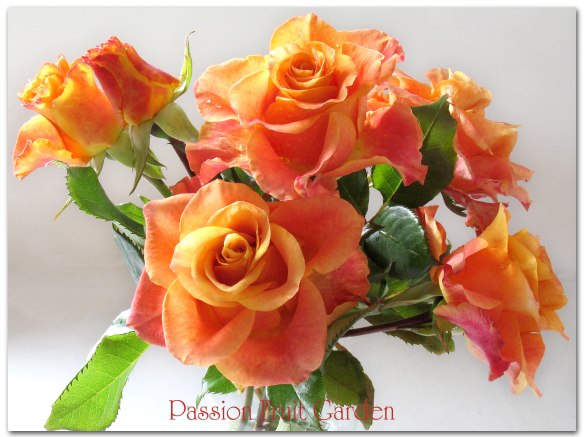 I am going to have trouble with this post because, to be honest, I don’t know anything about Mariana.  I presume I acquired this rose the year I went through a rose catalogue and bought nearly all the ‘apricot’ roses in it.  As it turns out, Mariana is not my kinda rose, but every rose in my garden is going to have its moment of glory and, this week, it is Mariana’s turn.  I have just checked out the current catalogue of the nursery in question and Mariana is no-where to be seen.

Anyway, I will do my best.  Mariana is a Hybrid Tea rose.  The blooms can just about be described as variable in colour.  They are, in part, orange, deep coral and deep yellow.  The blooms are typical hybrid tea-shaped, semi-cupped, with a high centre.  The petals, however, are quite distinctive, as some are ruffled along the edges.  There is no perfume.

When I put these blooms in a vase, I thought they would make a nice bouquet.  I must be right, for the few hits I found on the internet when I searched for information on Mariana, were for cut flowers, not for the actual plant.  Mariana is, obviously, a favourite with florists.  They lasted well in the vase.

The petals are thick and strong.  They feel quite leathery, which may explain why, after several days of rain, Mariana was ablaze with perfect blooms, with no water damage.  A thin-petalled rose would have balled after the rain.  I saw many such roses as I walked around.

Another thing about Mariana that struck me was the fact that the bush was covered in flowers, notwithstanding it is late autumn.  I don’t recall the plant looking so good earlier in the season so, maybe, it prefers the cooler, damp conditions.  I’m afraid I can’t be more specific.

My bush is relatively short, not more than a metre and, at the moment, looks remarkably healthy compared to a lot of my other bushes which seem to be losing leaves, getting black spot and, generally, closing down for winter.

Mariana was released by Kordes, Germany, in 2003.