Today’s recipe is another from this month’s feature cookbook by The Cookbook Guru, The Book of Household Management, by Mrs Isabella Beeton.  I think I deserve a medal for attempting this recipe.  Mrs Beeton is not particularly forthcoming with quantities and instructions and I had never made a rich, sweet bread before so I really didn’t know how the dough should look.  All this made the task challenging, to say the least.  All worked out well and we ended up with ten perfect dampfnudeln.  Kids (and men) would love these. I can imagine feeding a room full of teenagers and it wouldn’t cost much more than the price of a dozen eggs.

Dampfnudeln, which I had never heard of a week or two ago, are sweet dumplings (there are savoury versions, as well) steamed in milk.  When I chose to make this recipe, I did a bit of research as Mrs Beeton’s instructions were not the clearest and I found Recipes from a German Grandma.  Her instructions were very clear and gave me the confidence to give Mrs Beeton’s version a whirl.  The German Grandma advises that the dessert originated in  Bavaria. Dampf means “steam” in German. These dumplings are special to the town of Freckenfeld.  The town was saved back in the 30-year war in the 1600’s by dampfnudeln. The Swedish army came through with the edict: feed us or we destroy your town. 1,286 dampfnudeln were made and saved the town.

How such a recipe came to be in Mrs Beeton’s very English, The Book of Household Management, we will never know.

Here is the recipe as written so you can appreciate my need for guidance on all things dampfnudeln.

Mode.- Put the flour into a basin, make a hole in the centre, into which put the yeast, and rather more than ¼ pint of warm milk; make this into a batter with the middle of the flour, and let the sponge rise in a warm temperature. When sufficiently risen, mix the eggs, butter, sugar, and salt with a little more warm milk, and knead the whole well together with the hands, beating the dough until it is perfectly smooth, and it drops from the fingers. Then cover the basin with a cloth, put it in a warm place, and when the dough has nicely risen, knead it into small balls; butter the bottom of a deep sauté-pan, strew over some pounded sugar, and let the dampfnudeln be laid in, but do not let them touch one another; then pour over sufficient milk to cover them, put on the lid, and let them rise to twice their original size by the side of the fire. Now place them in the oven for a few minutes, to acquire a nice brown colour, and serve them on a napkin, with custard sauce flavoured with vanilla, or a compôte of any fruit that may be preferred.

The next problem was, how much is  “a very little salt”?  I have made enough bread to know salt is an important ingredient, so I was not going to be put off by the words ‘very little‘.  I decided on two teaspoons as I had about twice the amount of flour as the German Grandma and she used one teaspoon.

I presumed the yeast was fresh yeast or something similar and, therefore, decided to go with the standard three times the amount of fresh yeast to instant yeast.  Working on about 40 mils of fresh yeast, that came to 13 mils of dry yeast or 2½ teaspoons.

Here is my recipe…

*These are 20 mil tablespoons 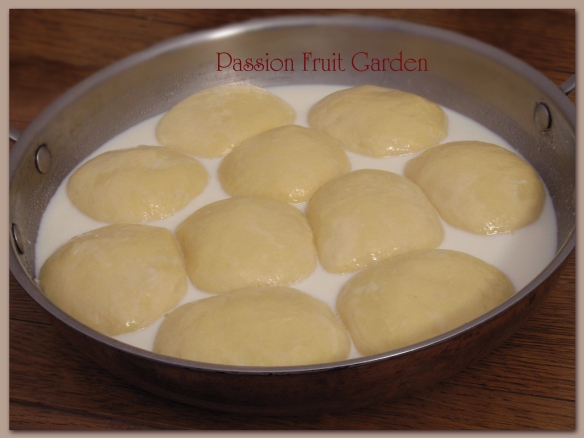 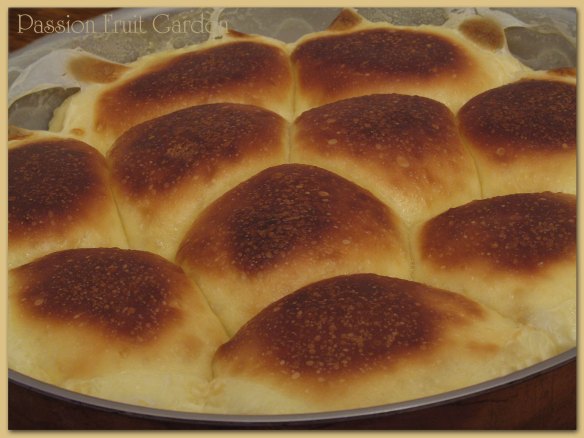 Beat the eggs, sweeten the milk; stir these ingredients well together, and flavour them with essence of vanilla, regulating the proportion of this latter ingredient by the strength of the essence, the size of the eggs, &c. Put the mixture into a small jug, place this jug in a saucepan of boiling water, and stir the sauce one way until it thickens; but do not allow it to boil, or it will instantly curdle.

This is bloody good custard.  There is no custard powder (with its dyes and chemicals) in sight.  Just be careful not to let it boil.

Postscript: As you can imagine, we had quite a few dampfnudelns left over.  I froze them and Maus and I have been having them for breakfast with jam.  They are like lovely sweet buns.  I am sure they would taste even better with jam and cream.