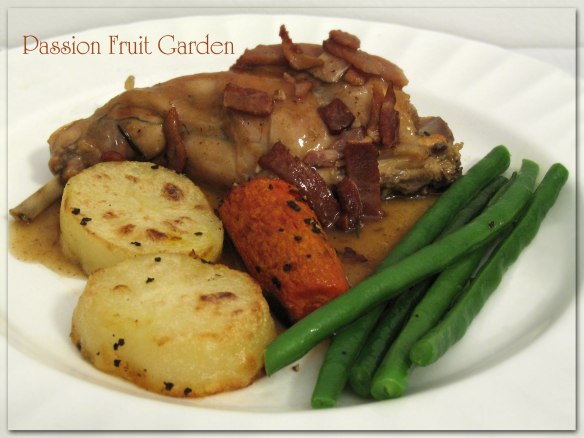 This month, The Cook Book Guru is featuring The Book of Household Management by Mrs Isabella Beeton.  Mrs Beeton’s book was first published in 1861.

It is not a book I would normally be clambering to cook from but, as it was being featured this month, I decided to give it a go.  If anyone is interested: a  full PDF copy of the book can be found at exclassics.com.  Here is the first volume, here is the second  and here is the third.

Clearly, rabbit was popular in 1861.  There are piles of rabbit recipes and, as rabbit is one of my all-time favourite meats, that is where I headed. I settled on Stewed Rabbit, Larded – though, I must admit, I didn’t lard the rabbit.  I had the right intention.  I went to the study and found my bodkin, thinking it may work but then had second thoughts.  I decided I was being silly – frying the rabbit in the bacon fat would be nearly as good and much less effort than threading bacon through the rabbit.

My verdict?  Bloody fantastic!!  We both loved it.  I still have a smile on my face.  You just have to try it.

It is very similar to the braised rabbit my mum used to make, although my mum never larded the meat nor did she include a glass of sherry – more’s the pity.

First up is the recipe as published and, then, what I did.

Well wash the rabbit, cut it into quarters, lard them with Blips of bacon, and fry them; then put them into a stewpan with the broth, herbs, and a seasoning of pepper and salt; simmer gently until the rabbit is tender, then strain the gravy, thicken it with butter and flour, add the sherry, give one boil, pour it over the rabbit, and serve.

Here is what I did:

*  This recipe is all about a quality stock.  Don’t be tempted to buy chicken stock or use a stock cube.  It just ain’t the same.  Remember, according to Choice Magazine, most chicken stock sold in tetra containers is just reconstituted stock cubes.

Chicken stock takes no time to make.  I decided on this recipe and whizzed down to our local butcher for a rabbit and some chicken frames whilst Maus whizzed off for a stick of celery and a carrot.  The chicken frames, the rabbit’s neck and a chicken backbone I had in the freezer went into a pot.  I added a roughly chopped leek, the carrot and the celery stick.  In went a few stems of parsley, a few bay leaves, a stick of rosemary and some peppercorns and the pot simmered for 3 hours.

When ready, strain off all the solids and strain the resultant stock through a fine sieve.  Taste the stock and add salt to taste.

I took out 500 mils and put the rest in the fridge.  Tomorrow, I will skim off any fat that has formed on the top and freeze the stock in 500 mil containers.  All up, making the stock would have taken less than 10 minutes.

Postscript:  I have just stored the chicken stock.  I now have 6 x 500mil containers in the freezer.