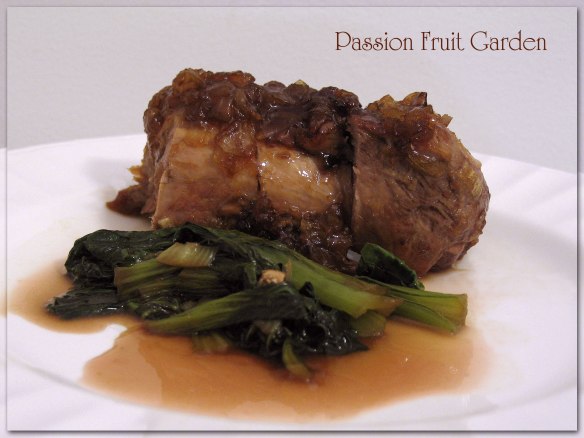 The other day I was reading a post by John, from The Bartolini Kitchens, and the penny dropped.

John mentioned that he loved to make jam but wasn’t too keen on eating jam and toast.  I smiled as I read that because I am the same.  I can’t possibly throw out excess fruit so I make preserves and then we end up with jars and jars of jam that take us years to consume.  My melon, lemon and ginger jam I made this time last year comes to mind.  It tastes great but we have probably only eaten two jars in one year.

John’s post featured pork tenderloin with plum sauce.  The base of his plum sauce was plum jam which John had made the previous summer.  I was very impressed that John had found a use for some of his jam and it got me thinking about my melon, lemon and ginger jam.  Melon and ham go well, as do pork and ginger.  There and then, I decided to try pork with some of my jam.

The experiment was a raging success.  Maus gave it the thumbs up.  Now, I know you are not going to have the same jam as me in your pantry but check out what you have and think about with what you could marry it.  Marmalade is an obvious choice for chicken or fish.  You may like to check out this page for some great savoury ideas for jam.

Pork with melon and ginger sauce

As an accompaniment, I served bok choy in oyster sauce which was perfect.

Bok Choy in oyster sauce (based on a recipe from Marie Claire, Cooking by Donna Hay)

*These are 20mil tablespoons. 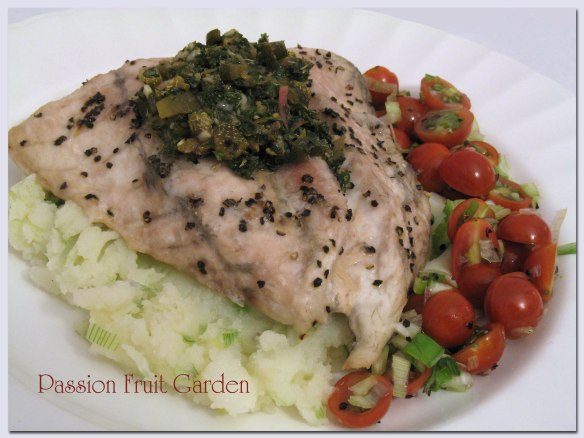 Ok, this photo is not the best but the meal was delightful. I don’t know why, but the piece of fish in this photo looks huge.  I don’t remember it being that big, it must be the camera angle.

The recipe (crushed olive oil potatoes and baked flathead with mint and caper dressing) was featured by Lona from Lona’s in the Kitchen.  The recipe is from this month’s Cook Book Guru feature cookbook,  Karen Martini’s Cooking at Home.

When I read the salsa ingredients, I began to get excited because I had all the ingredients for the salsa either in my garden or in jars from previous seasons’ harvests.

I bought barramundi farmed in New Zealand.  I don’t know much about fish but I do know barramundi is lovely and I hoped our neighbours’ farming practices are ok.  The salsa was to die for, the barramundi was fab and, as an added bonus, I was also able to add some of our millions of tomatoes to the plate for, as Lona mentioned, it needs a bit of colour.  Absolutely lovely – you should give it a try.