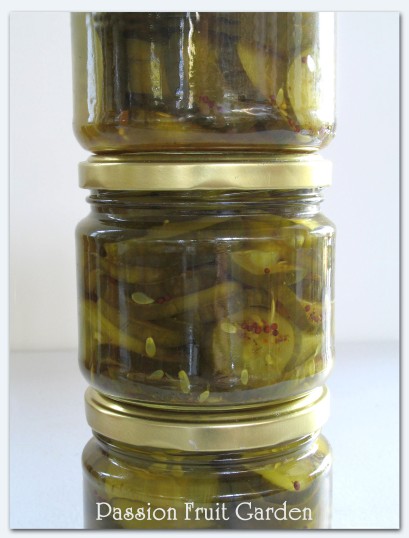 I made these pickles last summer when I had cucumbers galore.  Maus asked that I make bread and butter pickles.  She assured me she liked them.  I tell you now, I wasn’t convinced it was a good idea.  When you make pickles at home, you always end up with quite a few jars and my Maus is a fussy bugger.  I figured if I made them, she would politely taste a few from one jar, tell me that they were nice and then forget about ’em.  They would then languish in the pantry until I gave them away.  You see, I don’t particularly like pickled cucumbers.

Well, I was wrong!  Maus loved them and has gone through several jars.  My sister, Sandra, loved them, too.  She even came back for seconds.  As it turns out, of all the recipes I made last summer, these pickles have been the most popular.  Several people have asked for the recipe and I had to admit I had not got around to doing a post on them.  I was making so much stuff at the time, I wasn’t in need of a topic to write about, thus a post never happened.

The recipe is from Ball ‘s Blue Book.  Being American, the quantities were not metric but I just converted an American cup to our 250mil cup, quarts for litres, etc, and it worked out perfectly.  If you are American, and have the Blue Book, you may prefer to use the original quantities.