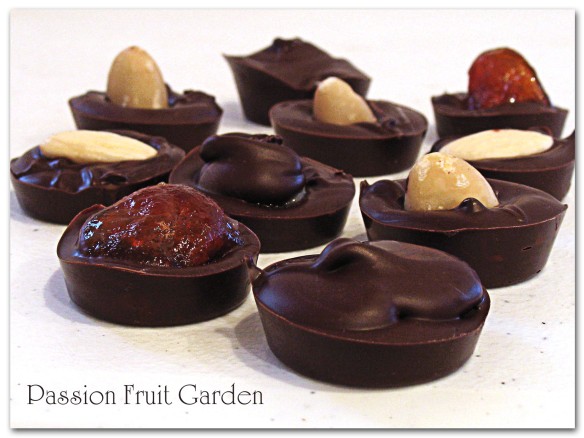 You Did It  from My Fair Lady

When I am in the kitchen, I expect things to work out.  When they don’t, I am a bit put out, to say the least, and so, I try and try again.

Those who are regulars on this blog know that I am very fond of cumquats, particularly glacéd cumquats.  In fact, I love all glacéd citrus and can think of nothing better than glacéd citrus coated in dark chocolate.  I have been glacéing cumquats for several years now and thought it would be a simple task of dipping them in chocolate and enjoying the fruits of my labour.  But, alas, I was wrong, very wrong.   My chocolates had unsightly chocolate bloom.

I started reading the lovely Celia’s Fig Jam and Lime Cordial blog and the penny dropped.  Celia is the queen of chocolate.  I noticed she did something called tempering to her chocolate before she moulded it.  Remember the grand final of the first series of Masterchef when Julie Goodwin beat Poh because Julie’s chocolate was perfectly tempered whereas Poh’s wasn’t?  Ok, now we are on the same page.

Well, let me tell you, it ain’t that easy.  It appears that chocolate is very touchy, one could even say it has a temper 😀  Each year, I would eat my glacéd cumquats coated in chocolate bloom and yearn of nice shiny chocolates like Celia’s.

Yesterday, it was raining so I couldn’t go outdoors.  My mind turned to the packet of Callebaut 811 Dark Chocolate callets I bought when I was in Sydney last year.  I will try again, I thought.

Maus (aka the hoarder) had kept the linings of some boxes of chocolates.  I decided to pour the chocolate into them and then put a piece of glacéd cumquat, an almond or brazil nut into each cavity.  This year, my thoughts were on merely tempering the chocolate correctly.  I decided coating the cumquats was just a little too ambitious.

And, as fate would have it, the very day that I was in the kitchen trying to temper chocolate, Celia posted a detailed tutorial on tempering and how she does it.

I used a different technique to Celia’s but followed all the previous advice she had given me and advice I had read:

This is what I did:

Celia advised me today that you only have about 5 minutes to mould your chocolate.  Celia said she gets her husband, Pete, to help at this critical time.  The first ones I did were great but, towards the end, they weren’t so good.  Next time, I will take Celia’s advice and have Maus at hand.

Of course, I am addicted.  I am off to see where I can get chocolate challets in Perth. 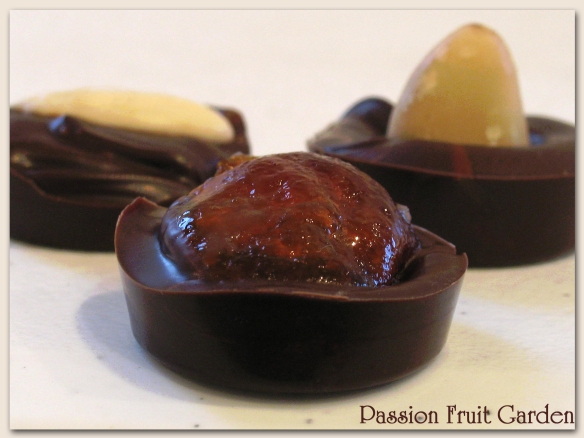