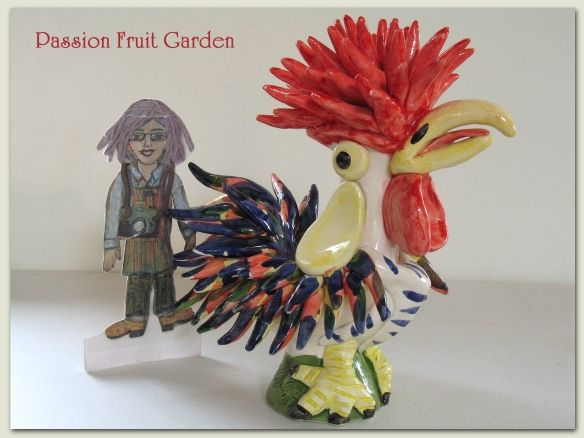 Flat Ruthie (a little battle-scarred from her travels) is standing next to The Rooster.  The Rooster is the major purchase from our holiday.  One can’t go to Portugal without coming home with a rooster in some form or another.  The Rooster was made by Maria da Conceição (aka Conceição Sapateiro) from Barcelos. 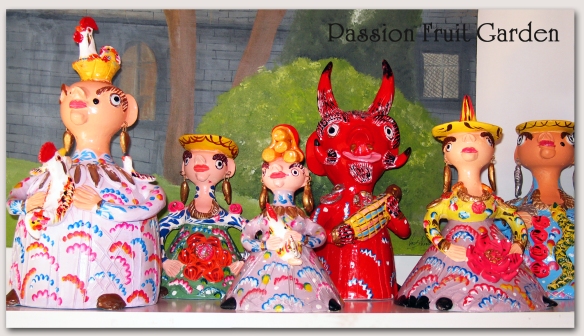 Here is some more of her work that we spotted on display in a shop in Guimarães.

We love The Rooster and so does Flat Ruthie. We are watching to ensure she doesn’t put him in her suitcase when she finally goes home.

I know we should have given The Rooster a fancier name but I said, so many times, whilst we were away, “Be careful of The Rooster.”  The name stuck.

We went to Portugal primarily to visit our friend, Gerlinde, at her beach house.  Gerlinde is a teacher in Berlin but spends her holidays with her husband, Alex, in Porto Covo.  As it turned out, we didn’t end up spending much time in Porto Covo.  Gerlinde was a fantastic tour guide.  We cannot thank her enough.  We saw an amazing amount of Portugal in the short time we were there (my feet still haven’t recovered).

Our first stop was Evora.  In this shot, Flat Ruthie is in the Capela dos Ossos (Chapel of Bones).  The Chapel was created in the 17th century from the bones of 5,000 monks.  Ruth is pictured with two mummified corpses hanging from a chain, one is of a small child.  Lovely! The placard at the entrance (translated) reads: “We bones that are here await yours.” Mmmm.

On our travels, we saw acres and acres of cork trees.  They are skinned of their bark every 10 years or so.  The trees are painted with a number indicating when they were last stripped so the farmers know when they can be stripped again.

I wonder about the future of the industry now that so many wineries are using screw tops.  It was interesting to see many products (including hand bags) made of cork – maybe they are diversifying.

These megaliths were not far from Evora.  They have been dated 4000-2000 BC.  Their symbolism remains a mystery but is believed to have religious significance.  Ruthie is surveying the scene from the top of the megalith on the right.

Here is Ruthie at the Convento de Cristo in Tomar.  The monastery was founded in 1160 by the Grand Master of the Templar.  It is amazing.  Architects were engaged to express the Orders power and royal patronage in stone and they certainly took their brief to heart.  The place is over the top in every conceivable way.  No doubting, these guys were important.

This window frame on the western side of the Chapter House is Manueline extravagance at its most amazing.  It was very hard to get a full frontal of it but, let me assure, it is spectacular.  It boasts ‘a Medusa tangle of snaking ropes, seaweed and cork boats, on top of which floats the Cross of the Order of Christ and the royal arms and armillary sphere of Dom Manuel’.  There is an equivalent window on the southern side but it is almost obscured.

The window is covered in lichen but it does appear that the window is being cleaned (see the blonde bits).  It will look all the more spectacular cleaned up. 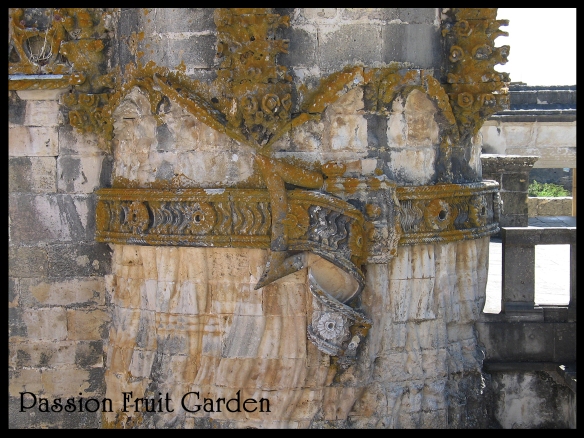 Here is a photo of a nearby pillar which I just love.  It is decorated with a belt and buckle.  What an idea!

Manueline is a uniquely Portuguese style of late Gothic architecture. It coincided, roughly, with the reign of Dom Manuel 1 (r1495-1521).

Here is Flat Ruthie at Monsanto.  Monsanto is famous for winning a national competition in 1938 as the country’s most Portuguese village.  The village is perched on a granite hillside.  It is built on top of, and squeezed in between, large granite boulders.  Everything, its cobbled lanes and houses, even dog bowls, are made of the grey rock. 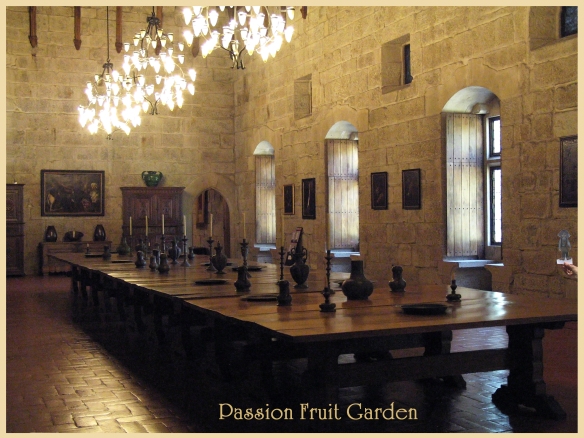 Here is Flat Ruthie in the dining room of the Paço dos Duques de Bragança in Guimarães.  The place was built in 1401 by Afonso, the first Duke of Bragança and restored as a presidential residence for 20th Century dictator, Antonio de Oliveira Salazar.

I just love this table.  The next time I get flustered cooking for a large dinner party, I will consider the poor cooks who prepared the banquets served at this huge table.

Here is a shot of Porto.  Flat Ruthie didn’t make it into this shot (Maus wouldn’t jump into the river so I could take a shot of them both.  It is hard to get good help …) 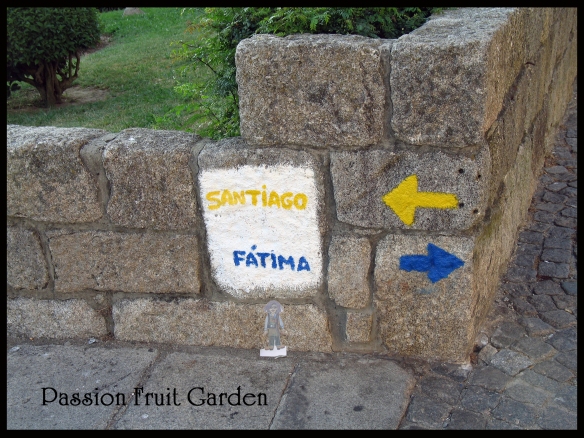 Here is Flat Ruthie in Porto.  The sign above her indicates two great pilgrimage destinations.  For a while, I thought Flat Ruthie might consider taking off on a pilgrimage but she happily jumped into my bag when we moved on.

Not quite Venice but a nice little town, anyway.  Aveiro was a great stop on our way back south.  It was bloody hot the day we were there so we didn’t ride on one of these boats.  Instead, we took the more civilised option of coffee inside the Museu Arte Nova.  We had an amazing number of coffees in Portugal.  It appears to be a national pastime.

This fabulous beach is Zambujeira do Mar.  It was one of many beautiful beaches on the Atlantic coast that we visited.  Again, there is no photo of Ruthie because Maus refused to jump off the cliff holding Ruthie above her head for the sake of the photo.  I don’t know where her spirit was!!!

Here is Maus (at last she was cooperating) with Ruthie at Cabo São Vicente (Cape St Vincent) mainland Europe’s most south-western point.  At the end of the Cape is a wind whipped lighthouse which has a 95km range (the most powerful in Europe).  The cape is described as windblown and it is certainly true.  Check out Maus’ hair.  It was so windy, I could barely hold the camera.  Maus has two hands on Ruthie in case she ended up in the Atlantic.  The cliffs behind Maus are 60 metres high and pretty fabulous.

Here are a couple of shots of the beautiful Lagos, Algarve.  Again, no Flat Ruthie in the shots due to Maureen’s uncooperative spirit.  Clearly, they could have jumped in off these cliffs.  There are people swimming in the water, so it must be safe. 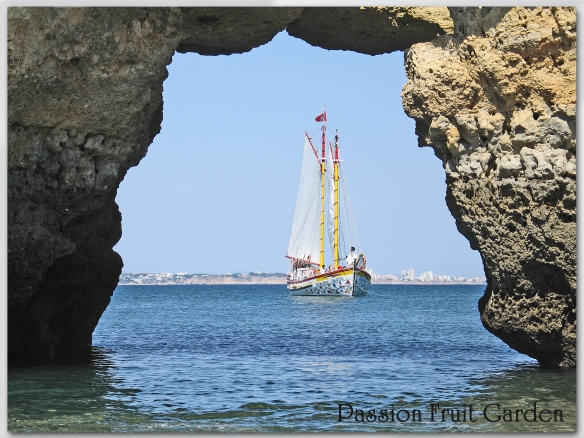 This last shot was taken from a small dinghy with an outboard motor in which we (Gerlinde, Maus, Flat Ruthie and I) did a tour of the grottoes.  Flat Ruthie was safe in my bag. I didn’t want to risk any water damage to her complexion so she didn’t come out but she was there.  I guess Ruthie could have jumped overboard for the sake of the photo but that seemed a little extreme.  I don’t know whether she can swim.

As you can see from this small sample of photos, Portugal is a very beautiful country, full of unexpected delights.