Are cucumbers and tomatoes.    What else?  You may well ask.

My vegie patch experience has taught me so much this year.

Number one lesson:  10 cucumber plants will feed, at least, 50 people for the summer.  I have never seen so many cucumbers in my whole life – 28 was our record for one day.  At last, they are beginning to slow down. We are now picking about 8-10 every second day.   I don’t know how many cucumbers I thought two people could eat.  Maus has even taken to accosting strangers in the street and offering them cucumbers.  On most occasions, they are so amazed at the offer, they take one.

We now know which of our neighbours are big cucumber eaters.  I am sure this is useful information that will come in handy one day (a bit like all the things in Maus’ sheds).

Here is a photo of Jules doing the right thing for the cucumber cause.  Luckily, my three dogs like cucumbers.  They are a great treat for dogs because they are good for them, they love them and they have very few calories.  Lily has been known to eat half a cucumber at one sitting. 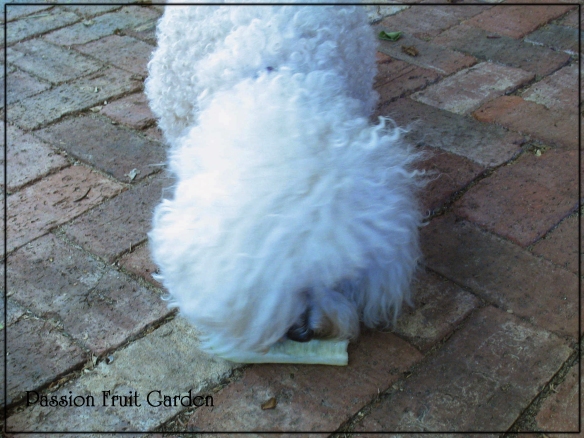 If anything can beat the cucumber situation, it is the tomatoes.  I can’t even imagine how many we have had.  We have preserved so many, I am exhausted.  I just hope we eat them all.  I have never considered how many tomatoes we eat in a year so I don’t know our rate of consumption.  This time next year, I sure will!  I hope it is a lot.

Here are a couple of shots of tomatoes I slow roasted.  They have been cut in half, drizzled with olive oil and sprinkled with salt, pepper and mixed herbs and then roasted for 1.5 hours at 120 -150°C.  On Celia’s suggestion, I then vacuum-packed and froze them.  That is not technically true – as mine still had quite a lot of juice, I froze them and then vacuum sealed them but let’s not get nit-picky.

Here are some tomatoes before they went into the oven… 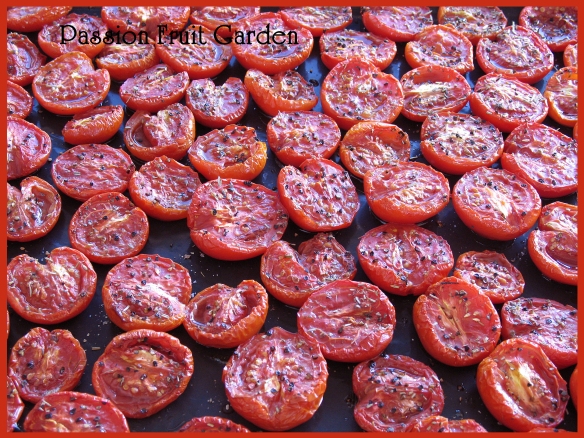 And here they are, nicely roasted.

are prunes and plums.  Prunes and plums fruit better if there are several varieties that flower at the same time in close proximity.  For some reason, when I was planting my fruit trees, I decided to plant prunes.  I found a little trio that fertilized each other: Prune Splendour, Prune d’Agen and Greengage Plums – so I have one of each tree.

Prune Splendour is an American prune.  It is a cross between prune d’Agen and an Hungarian prune. It’s long in shape, dark purple with a yellow flesh, and sweet to taste. It is estimated 11% sugar (d’Agen, its parent, has about 8%). 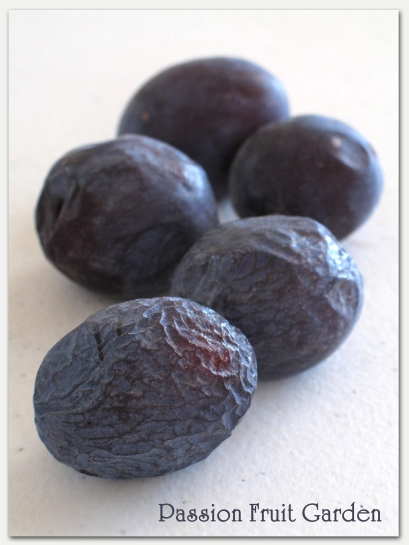 Prunes will begin to wrinkle if left on the tree for too long or if they drop from the tree and are left in the sun.  These prunes have not been in the dehydrator but have just been picked (or found on the ground) like all the rest.

I kept a small bowl for eating and put the rest into the dehydrator.  They took ages to dry.  In her book, Cooking and Travelling in South West France, Stephanie Alexander advises that when prunes are dried, their moisture content is usually reduced to about 20%.  In this state, they will last for years. It takes 3.5kg of fresh prunes to produce 1kg of dried prunes.  To sell them, producers add water to partially rehydrate them so that the moisture content returns to 30%. These are the prunes we buy in the supermarket.

I have had trouble storing my prunes.  The first year, I kept them in the cupboard and some little bug got into them.  The next year, I put them in the fridge and they went mouldy.  This year, I have vacuum packed them and put them in the cool room.  Here’s hoping that Stephanie Alexander is correct and they last for years.

I like to use the dried prunes for cooking savoury dishes because they are rehydrated in the cooking fluid and keep their shape. Commercial prunes tend to disintegrate during cooking.

Many recipes from old cookery books suggest soaking prunes overnight.  This is only necessary today if you are using prunes that haven’t been rehydrated.

I love using my produce in cooking.  It gives me a warm fuzzy feeling.  Misk, from Misk Cooks, did a post recently entitled How to Stuff Pork Tenderloins with Prunes and Walnuts.  I was, initially, interested because I still have pork in the freezer from my generous neighbour, Regina (who, sadly, has moved).  But then I got really excited because I knew the prunes were on the verge of ripening.

As I couldn’t wait for the prunes to ripen,  I stuffed a pork fillet with sun dried tomatoes and marinated feta – it was lovely.  But once my prunes were ready, I soaked some in sherry (as suggested by Misk) and voila!  It was really yummy (which made me happy)and I used my own produce (which made me happier still).

Greengage plums are European.  They are called gages because they were, originally, brought into Britain from France by a man named Gage almost three centuries ago.

Greengages are grown in temperate areas (they need 900 hours chilling below 7°C during fruit bud dormancy). They are considered to be amongst the finest dessert plums.

Greengage plums are identified by their round shape and smooth-textured, pale green flesh.  The skin ranges in colour from green to yellowish. They are, on average, smaller than a normal plum (usually between 2cm and 4cm diameter).

We picked a bucket full the other day.  As we had no electricity (something to do with maintenance of the system), we couldn’t do too much else so we decided to bottle them straight away.  I only kept a few for eating.  We now have 16 bottles of greengage plums.  I made a medium syrup: 3 cups of sugar to 1 litre of water as we will be eating them with natural yoghurt and the syrup sweetens the yoghurt.  The plums were processed in a hot water bath for 20 minutes.  We had them for breakfast today and they tasted great.

Are lots of prunes d’Agen.  Stephanie Alexander mentions an intriguing fact about them.  It is that they are not actually grown in the town of Agen. “Historically the fruit were harvested … and transported to Agen, an important river port.  It was then sent by barge to Bordeaux for shipping to England, the packing cases stamped ‘Pruneaux d’Agen’ (prunes from Agen) and thus the name has stuck.”

You will note that the prunes in this photo are nice and shiny, whereas, in the photo of prune splendour, they still have their wax bloom on them.  Maus reprimanded me for not shining them before taking a photo.  She decided the prunes d’Agen would be shining in their photo. We have nearly 4 kilos which are now in the dehydrator.

Well, in my garden really, was a summer luncheon which, because it was so bloody hot, ended up being a summer supper.  We had crumbed local (Fremantle) sardines, with cherry tomatoes and parsley from the garden.  We also had slow roasted tomatoes, caperberries, olives and cucumber relish from the garden.  It is a wonderful feeling to be able to feed people with produce you have grown.

Here is a close up of the tasting plate.  Of course, we had wine, bread and cheese as well.  Heaven.

Are three jars of passionfruit syrup, using the recipe that featured on my very first post.  Blogging really makes you aware of the seasons and time.  One year has passed.

BTW, the recipe stood the test of time.  How good does that passionfruit syrup look??? It tastes great. 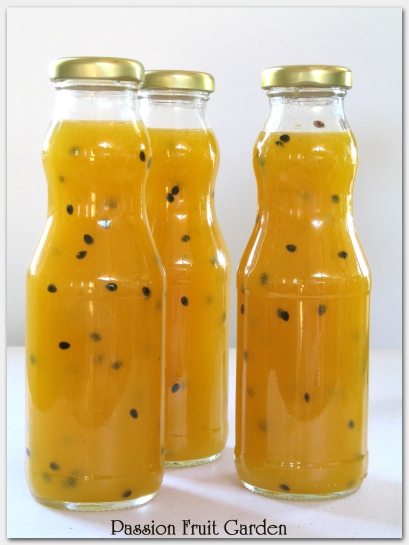 Is this absolutely gorgeous bowl and spoon I received as a Christmas gift from my sister, Juanita.  She, obviously, has good taste because she was the very sister who gave me the lovely oil taster and pourer I featured in my April 2012 IMK post. 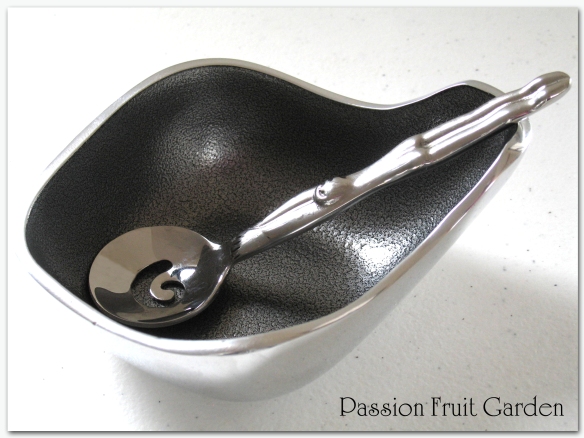 The set is by Carrol Boyes from South Africa.  It is called Diver.  If you look carefully at the spoon handle, you will see a person diving into the bowl.  Lovely.

The bowl is aluminium and the spoon is stainless steel.

Are these absolutely fabulous mini strainers.  Perfect to strain olives, capers, etc.  They were a gift from my cousin, Michael, and his partner, Rob.  I just love the colours.

This is an arty-farty shot.  They are very dashing. 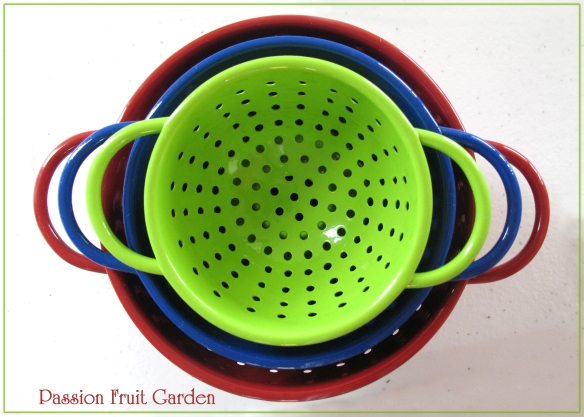 If you would like to see what is in other bloggers’ kitchens this month, visit Celia at Fig Jam and Lime Cordial.  Celia hosts In My Kitchen each month