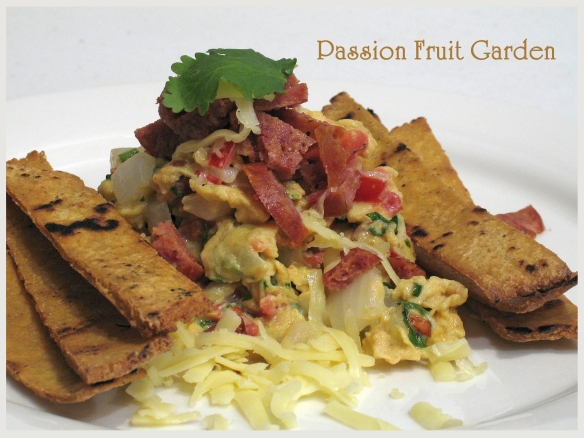 Doc did a post last week:  Ever Heard of Migas?”  “Well, no!”  It appears that Migas comes in many forms but the Doc’s post was a Tex-Mex version.  From what I could see, it looked like an up-market scrambled eggs.  I was interested because its ingredients include Jalapeno chillies, coriander and tomatoes, all of which I have growing in my garden.  You also need chorizo which I had in my freezer.  It was meant to be!

It is supposed to be a breakfast dish but I don’t like cooked breakfasts so we decided to have it for dinner.  The only problem was Doc insisted that it be served with deep fried corn tortillas.  He gave strict instructions not to use part wheat tortillas.  Old El Paso Tortillas are the only commercial ones I have ever seen in Western Australia and they have wheat in them.

What was a woman to do but to make her own.  I checked out the only Mexican cook book I have which was a present from my sister, Vickie –  Mexican Cooking, by Roger Hicks (who, interestingly, is an Englishman living in California) for a recipe for corn tortillas.

They are made like a chappati – only the flour is different.  Chappatis require atta flour and tortillas, masa flour.  I even used my chapatti press.  If you do a google search for “tortilla press images” and then one for “chapatti press images”, you will soon see that they are exactly the same.

If you would like to make Migas, which is a mighty tasty scrambled egg, check out the Doc’s post.  Of course, before you start, you will need corn tortillas.  Here is how you make them.

Masa harina is not an ingredient most Australians would have heard of.  I certainly hadn’t.  So off to Wikapedia I went and this is what I learnt.

Masa is Spanish for dough.  In  the Americas, it is often short for masa de maíz, a maize (corn) dough made from freshly prepared hominy.  It is used for making corn tortillas, tamales, pupusas, arepas and many other Latin American dishes. The dried and powdered form is called masa harina. It is reconstituted with water before use.

To make hominy, field corn grain is dried and then treated by soaking and cooking the mature grain in a dilute solution of slaked lime (calcium hydroxide) or wood ash, a process termed nixtamalization.

Cornmeal made from untreated ground corn is unable by itself to form a dough on addition of water, the chemical changes in masa allow dough formation, which is essential to the ability to fashion dough into tortillas.

So there you go.  The hardest part in making corn tortillas in Perth was to find masa harina.  My favourite shop, Kakulas Sister, in Nollamara, did not let me down.

Essentially, all you do is mix the ingredients together to form a soft dough, then form the dough into 12 balls.  If you are using a chapatti/tortillas press, about 70g seems about the right amount.  If you don’t have a press, you can roll out the dough with a rolling pin.

My trusty book suggested putting a plastic bag on each surface so that the dough doesn’t stick to the press.  I thought I would be smart and used plastic wrap.  It didn’t work because the wrap stuck to itself.  What we eventually did was put plastic wrap on the base, place the ball of dough on the wrap closer to the hinge than the other side and then cover the surface with a piece of plastic bag.  Press and hey, presto! you have a tortilla. 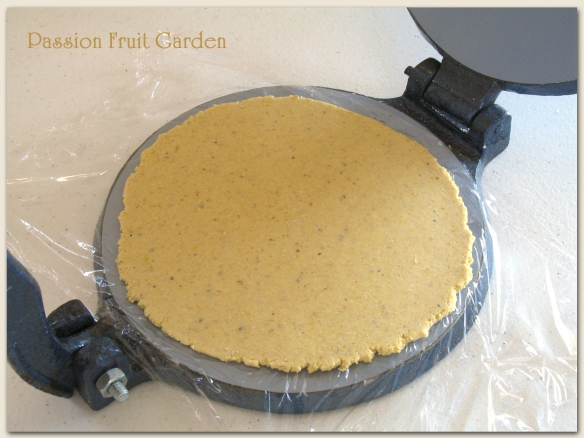 You are supposed to cook your tortillas on a comal (essentally, a cast iron flat pan) but who in Australia has one of those?  So use a dry, heavy-based frying pan.

Once you have your corn tortillas, you can follow the Doc’s recipe.  It is very simple and very tasty.  Doc’s recipe feeds 4 so I halved it.