Sometimes, shit happens!!  Maus and I were sitting outside on a lovely, mild, summer’s night, waxing lyrical about how lucky we were and what a wonderful life we have, when I broke the spell by saying,  ” It is Sunday and I don’t think I did a ‘Rose of the Week’ post last week.”

Maus summarily directed that I get up from the table, not finish my last drop of red and do my Oklahoma post.  I thought this was retirement:)

I am not a great fan of red roses but I do like to follow a trend when I see one, therefore, when it became the habit of local vineyards to plant red roses at the end of each row of grape vines (supposedly, as an early warning sign for botrytis), I decided it would be cool to follow suit.  I only have five rows of grape vines but that meant 10 red roses:)

Oklahoma is a survivor.   It is a hard, cruel life that mine suffers but, still, every year it throws out large, dark red, exhibition-style blooms which have an intense fragrance.  The flowers are borne, individually, on a long stem.

The foliage is dark green, leathery and matt and the growth is vigorous.  It, reportedly, grows 2.1 – 2.4m in one season, although mine is nowhere near that height.

According to my books, Oklahoma needs a temperate climate. The flowers scorch in hot areas and turn magenta in cold.   I don’t know that I have noticed either. 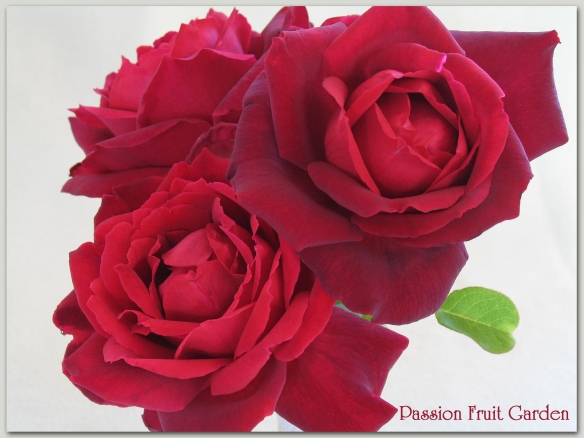 Oklahoma is a Hybrid Tea rose, bred by Swim and Weeks (USA) and introduced in 1964.  The name is apt because Oklahoma actually means ‘The red man’s land’.