Ultimate, that is according to the Doc.  Bloody good, in anyone’s language. 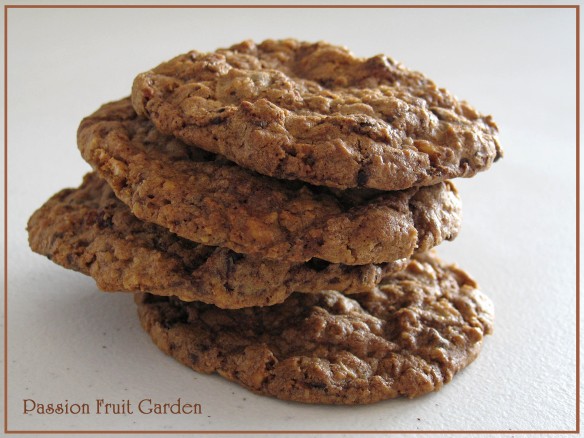 The Doc blogged about these biscuits not so long ago.  The original recipe is from The Complete America’s Test Kitchen Cookbook.  The Doc is diabetic so he reduced the sugar significantly and replaced some of it with Splenda.  If you are trying to cut down on your sugar but still like a biscuit every now and then, you should check out the Doc’s post. I made the full sugar version.  Here are the ingredients I used.  The method is set out in the Doc’s post:  350°F is a moderate oven, about 180°C.

The instructions say to use ¼ cup of the dough for each biscuit.  This makes 16 biscuits.  We used slightly less dough and made 21 biscuits.  Ours were about the size of a golf ball.  We flattened them to about 2cm deep.

When you put them on the tray, make sure you leave plenty of space between each biscuit because they spread, significantly.  Ours ended up twice the size of the flattened ball, about 10cm wide.  That is one big cookie!!!  You may want to make yours smaller, maybe the size of a walnut and then flatten.

Even though the biscuits were much bigger than we would normally make, Maus and I easily manage to eat a whole one.  As I said, they are bloody good.

This is another great recipe from a fellow blogger.  Thanks, Doc.