Preserved lemons (and limes) pop up regularly in recipes.  They are relatively expensive to buy yet so very easy and cheap to make, especially at this time of the year when we have lemons and limes galore.

I remember reading in one of my cookbooks (I can’t remember which one) that some homes have big vats of preserved lemons which are never emptied but just topped up each year.

In 2003, I made jars and jars and jars of preserved lemons and limes.  We are down to our last two jars.  I think I used 4 different recipes at the time.  What I learned from that experience is:  they last for ages; you do, eventually, run out; and it doesn’t really matter what spices you add because the overwhelming flavour is salty lemon rind so you may as well keep it simple.

Most recipes tell you to make 4 cuts nearly to the base of each lemon and put salt into the cut.  This would be OK if you had a big vat in which to store your lemons but if you are putting them into jars, you are better off quartering them.  It is so much easier to pack quartered lemons into jars.  Also, choose small lemons – they are easier to pack than large ones. All recipes work equally well for limes.

It is important to realise that the quantities are approximate.  Use plenty of salt, ensure  the lemons are packed tightly and are totally covered in juice.

This recipe is based on one from Marie Claire Flavours but they are all, essentially, the same.  You can use whatever spices you like: coriander seeds and cinnamon are popular.  Don’t use garlic – it cannot be preserved in this manner.

I made four times this recipe for my four jars. 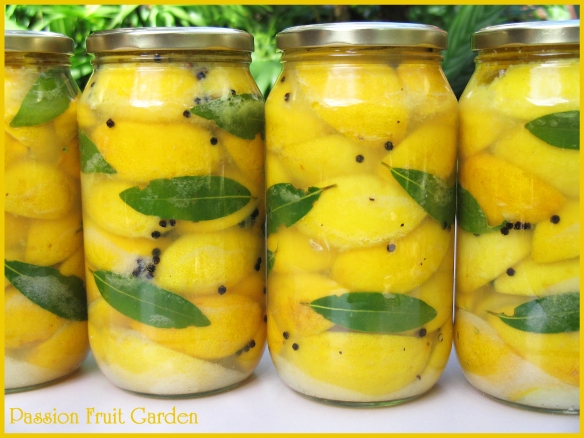 The recipe says to leave for one month before using.  I would leave them much longer than that. Remember, I am currently using ones I made in 2003, yes 2003:)

You will note that there is still a lot of non-dissolved salt in the jars.  Just rotate the jars every so often until it is dissolved.

To use: wash the preserved lemon in water.  Remove the flesh and pith and discard.  Use finely chopped rind in recipe.