There is so much in my kitchen this month, it was very hard to decide what to include.  We went a little mad on our recent trip to Sydney.  We had such a good time buying things.  I am sure there will be more Sydney purchases in later IMKs.

Are these beautiful hand-painted Soizick-designed Limoge tea cups and saucers.  We bought them from Peter’s of Kensington.  They were 70% off.  I love a bargain and I love pink and purple. What was a woman to do?  We have been having our last cuppa for the day in them.  They are very lovely. 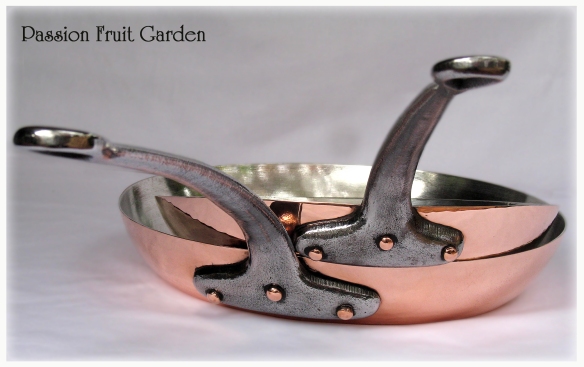 Are Maus’ beaten copper frying pans.   I love them as if they were mine.  I have to remind myself that Maus used her birthday money to buy them, although I encouraged her.  She bought them from Alain Lagorsse at the weekend market in Sarlat, in the Dordogne, South-West France.  Alain has won the prestigious MOF ( Meilleurs Ouvriers de France – Best Craftsmen of France ) Award.  He is also cited as Compagnon du Tour de France and Arts sciences et lettres.

If you are ever in the area, consider visiting Alain Lagorsse’s workshop at St-Amand-de-Coly, Montignac, and buy yourself a pan. 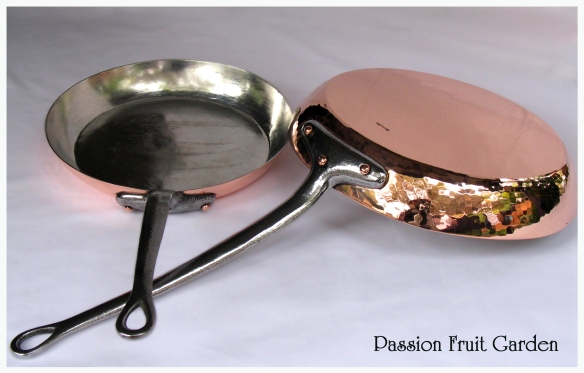 We are very excited about the pans at the moment because we had them re-tinned in Sydney.

Maus bought them in 2003 and they were absolutely fantastic for 5 years until they needed re-tinning, then the saga began.  We had them re-tinned twice by a guy in Perth and once by a guy in Tasmania and, each time, they melted when we put them on heat.  We now know the reason – it was because they did not use pure tin.  Pure tin can take about 3 times the heat that the tin mixture they used can.

Celia, from Fig Jam and Lime Cordial, told us about Louis Berczi.  He is recommended on the Chef’s Warehouse site.  He did a fantastic job, we could not be happier.  I cooked rissoles the other night and the pan coped with bubbling oil, which was pretty hot.   Louis’ contact details are: 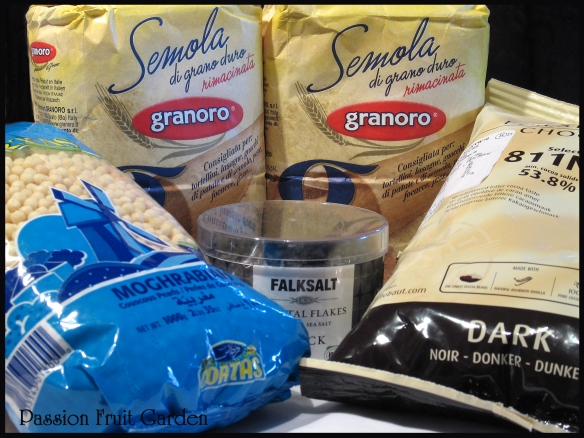 Are some goodies the darling Celia gave me and some Callebaut chocolate we bought from Chef’s Warehouse for when I learn how to temper chocolate.  Three chocolate bars were also included in the gift but we ate them before I could take a photo of them.  Celia bought the fine semolina durum flour because I could not find it in Perth but, today, I found it at Balcatta Fresh on Karrinyup Road.  You need to have fine, remilled semolina flour if you are making bread with it because normal semolina flour is too coarse.  BTW, the black salt is great and, ironically, not too salty:) 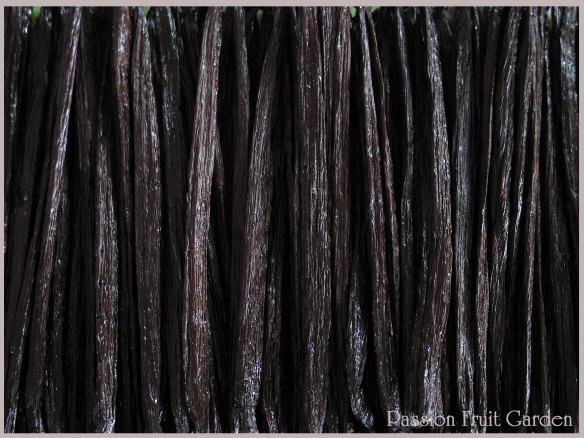 Are 122 vanilla beans, a Celia recommendation from Chef’s Warehouse.  That is how many I got in my 500g packet.  Celia assures me I will find uses for them all.  I have opened the packet and re-packaged them, 5 to a bag. 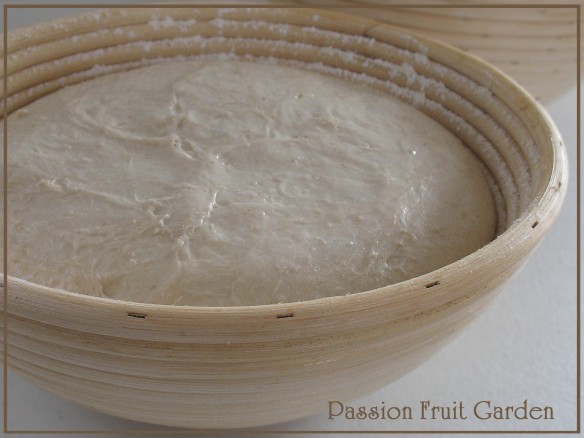 Are my new bannetons, another Celia recommendation (is there a theme here?) and another purchase from Chef’s Warehouse… 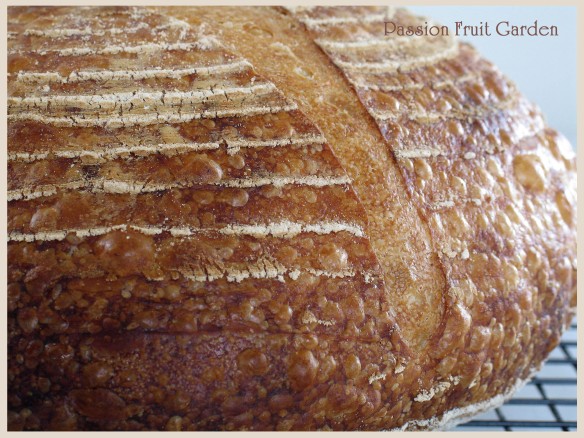 And my first loaf of bread made with dough proofed in the bannetons.  I had to include a photo of the characteristic rings made by the flour. 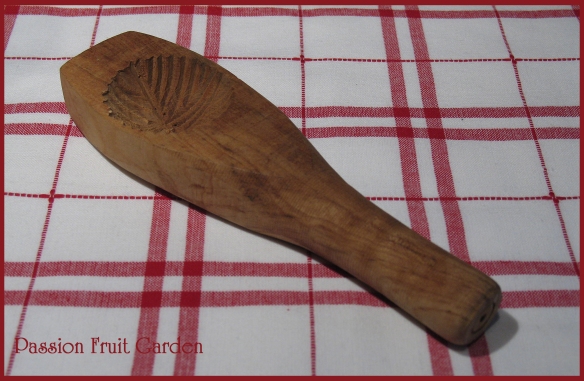 Is my ma’moul mould which I bought from Abu Hachem’s shop in Dulwich Hill.  It was their last one.  Fouad, from The Food Blog, recommended the shop to me.  The shop is near the Dulwich Hill train station.  Ma’mouls are date filled biscuits and I am going to try and make them. I read about them in Nouha Taouk’s book, Whispers from a Lebanese Kitchen. 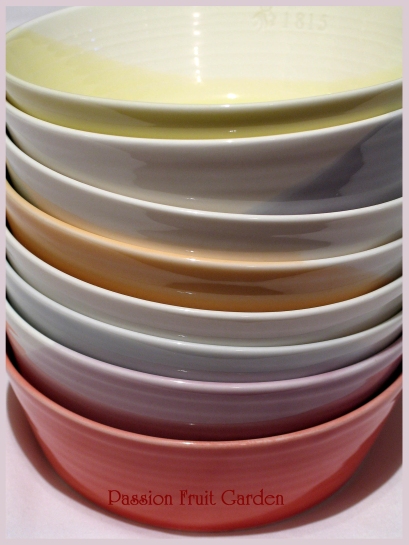 Are my new Royal Doulton dessert bowls, the ‘1815’ design.  They were another Peter’s of Kensington purchase.  They are a set of 8 (each a different colour) and were so cheap, I couldn’t believe it. 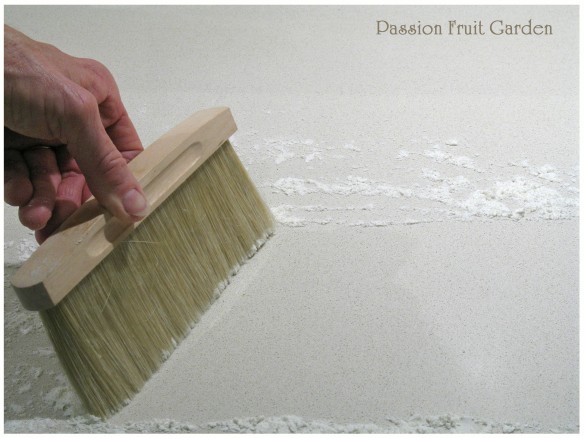 Is my new bench brush (another Chef’s Warehouse purchase).  It is perfect for brushing up flour on your work bench after doing your ‘stretch and folds’. 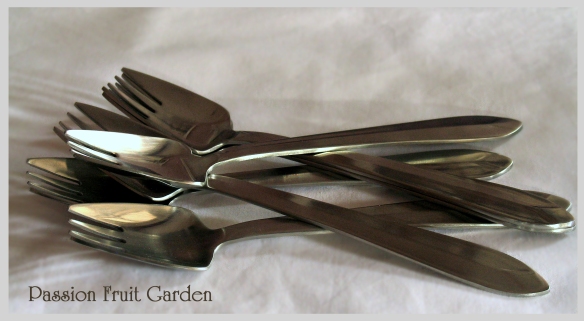 Are my new Splayds.  I have a set in Perth, which we use all the time, so I decided to buy a set for ‘down south’.  We also bought a set for Maus’ nephew who lives in Columbia, South Carolina, to remind him of home.

Splayds are an Australian invention.  They are a blend of knife, fork and spoon and were invented in the late 1940’s. They are used, primarily, for casual eating. 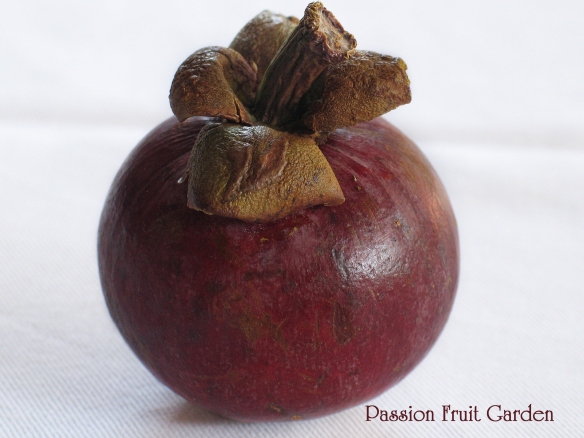 And, finally, in my kitchen:

Is a mangosteen.  Maus saw them at the supermarket and bought me one as she knows I really love them.